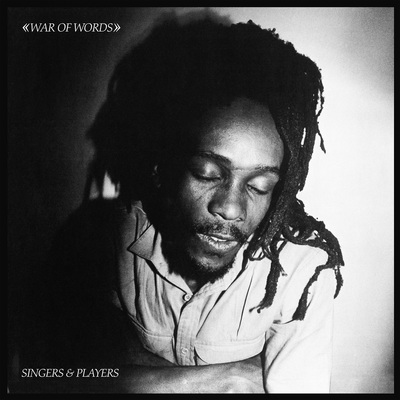 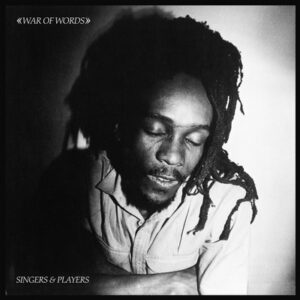 As part of Adrian Sherwood’s entire On-U Sound re-issue program they’ve just released Singers & Players’ classic album War of Words (which originally came out on 99 Records with the On-U main-man on production duties). Ged Babey fills us in on an essential release, which also just happens to feature Keith Levene and Ari Up.

This and all of the early On-U Sounds dub are absolutely essential listening. It’s chilled out music with random sounds, massive reverb and distinctive voices, like the thunderous tones of Prince Far-I  and the honey-sweet vocals of Bim Sherman.

Every home should have some Singers & Players, Creation Rebel or New Age Steppers albums (maybe replace those UB40 ones with them in fact?) and these re-issues mean you can fill in all of the gaps in your Adrian Sherwood productions collection with digital versions or heavyweight vinyl re-cuts, “remastered for maximum bass pressure”.

These reviews: here and here are a great read if you want an in-depth read about the record.

Via the press release…

Originally released on cult imprint 99 Records in 1981, War Of Words is the classic debut album by Singers & Players, a loose collective featuring top Jamaican deejays Prince Far I and Jah Woosh, plus members of the Arabs and Roots Radics.

The mic is dominated on this record by the sweet vocals of cover star Bim Sherman. Whilst very much based on a dub reggae blueprint, the record also features Keith Levene from Public Image Limited on guitar and Ari Up from The Slits on backing vocals. Kingston sound system culture as viewed through the prism of the London post-punk squat scene, and championed by the quintessential downtown  NYC no wave record label (it first came out on the legendary imprint 99 Records).

The track “Reaching The Bad Man” was a highlight of the recent compilation Sherwood At The Controls Volume One: 1979 – 1984, and is very much a product of that era of Adrian Sherwood’s leftfield experiments with the possibilities of dub.

The physical reissues have been re-cut as dubplates & mastered in Berlin for maximum bass pressure and they include a fold-out poster insert and download card and as such they make vital purchases for fans of the era. The On-U Sound back catalogue is available again after a long period of being out-of-print in digital formats too. Full details at the On U Sound Bleepstore.

The whole collection features over 70 albums that explore the infinite possibilities of dub as refracted through the prism of other scenes the label touched over the years such as new wave, electro, and industrial. This is the latest stage in an extensive 2015 release schedule that has already taken in new albums from On-U head Adrian Sherwood in collaboration with Bristol dubstep don Pinch (the epic Late Night Endless), a crucial compilation of early Sherwood productions (Sherwood At The Controls Volume 1: 1979 – 1984), and reissue of obscure Mancunian post-punks The Mothmen.

All words by Ged Babey except where mentioned. More writing by Ged on Louder Than War can be found at his author’s archive.