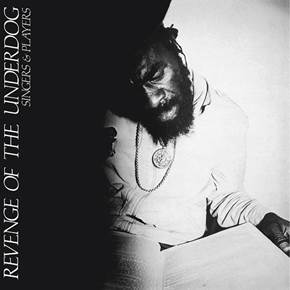 Singers and Players  -Revenge Of The Underdog  (On-U Sound)

More righteous reissues from On-U.  Ian Canty has a listen for Louder Than War and concludes, ‘Masterful work’

A similar proposition to label mates the New Age Steppers, Singers and Players took the cream of post punk and reggae musicians and produced a brew of Dub that was potent, occasionally jazzy, thunderous and exhilarating. Members of the Slits, PIL and Bristol’s Glaxo Babies (Adrian Sherwood’s On-U-Sound had a massive effect on the Bristol scene from the Babies and Pop Group right on through to Massive Attack and Tricky) featured in this loose aggregation along with Reggae legends like Prince Far I, Bim Sherman and Jah Woosh, plus members of the Roots Radics band. The Radics were to the 80s what the Upsetters were to the early 70s and the Skatalities to the 60s – the premier musical force backing anyone who was anyone on the Dub Reggae scene.

“Revenge Of The Underdog” was the second Singers and Players album and on its release in 1982 was really the “state of the art” as far as Dub was concerned. It shows how things had changed that the UK was producing some of the best serious dub plates while the digitalised sound was taking over in JA. Prince Far I’s sonorous bark is in full evidence (“Prodigal Son” is a relatively gentle skank but still sounds great and full of dread thanks to Far I’s trademark gruffness) and the perfect foil and contrast to Bim Sherman’s honeyed tones (“Too Much Workload” is just lovely). Of course the backing compliments things excellently – always inventive, crashing and exciting on the DJ cuts, beautiful and fluid on the more song based material.

The post punk element is more confined to the Jah Wobble style bass excursions on the album but the accompanying EP gives more of an overt nod to the clash of the two sounds. “Bad Man Dub” from the “War Of Version” EP could almost of PIL’s “Careering” inside out – the stomping beat but shafts of noise fly in and out, cool washes of instrumentation and vocals float and the bass plays on, a massive, eternal thing. The heartbeat of a giant. It is genuinely shocking in a good way, making one feel like you are listening to the best music you possibly could at that moment – it is an incredible piece. Blimey, it still takes your breath away in 2015.

Both of these re-issues form a wonderful testament to a time when the mainstream was getting more contrived and workaday by the minute, while the likes of Adrian Sherwood and his On-U-Sound were blasting off out of the earth’s atmosphere with a huge sonic boom. The Singers and Players only formed a small part of it, like a picture that was just a piece of a much larger work, but a mighty part it was. Sherwood’s Dub version was psychedelic in the sense that the music took you on a trip to both outer and inner space, his vision was at once going right back to the early Dub masters but also stamped with his own individuality. Masterful work.
On-U Sound store