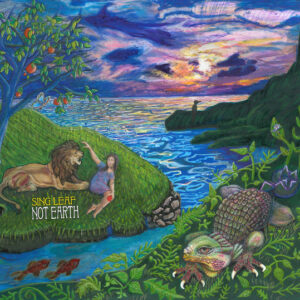 When David Como – AKA Sing Leaf – set out to create an album that was in his head caught between two worlds he may have subconsciously tried to achieve that by altering between concise pop songs and longer, trippier semi-instrumentals.

Or maybe it’s a just a PR gimmick, and he just likes playing with the listener’s imagination and tolerance of the obtuse and offbeat.

Either way this is a real gem of an album where Como plays all the instruments, records and mixes it before firing it off to his regular collaborator Sandro Perri, who has the tricky task of mastering this idiosyncratic album.

Easy On You is a bittersweet piece of folk pop in the Sufjan Steven realm combining a massive hook with some deceptively raw lyrics. Little Magic is another folky pop gen powered by a simple riff.

Como claims the optimistic folk rock of Forever Green came to him fully formed on a road trip with his wife, but who cares as it’s another couple of minutes of pop joy.

So far, so poppy, but then Como really starts essaying what he has described as a ‘Disney, sci-fi, alien landscape vision’ on some odd and meandering instrumentals like the minimalist Honey Eater, which has touches of Phillp Glass with its Eastern drumming and snatches of voices. Another long piece Eggs Tooth is pure sci-fi soundtrack, which comes from somewhere very deep in Como’s psyche.

The off kilter Out Of The Dream pulls all the different ideas together nicely with drones, more eerie drumming, odd key changes and words like: ‘When I look into eyes/I’m afraid I’m alive.’

This is certainly an album of two halves, but it is worth persevering with as David Como is most definitely an artist with a very singular vision….and thankfully the ear for a decent melody too.