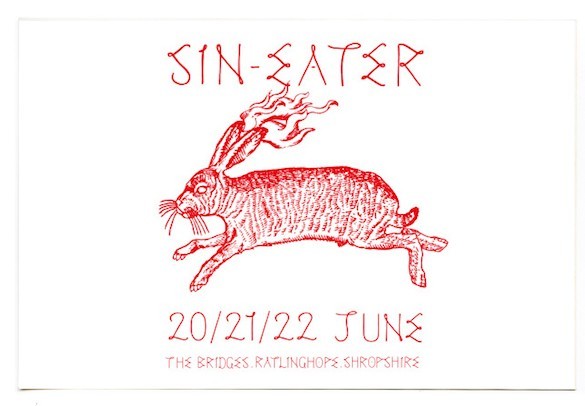 Outsider folk, space rock and a giant wooden hare. Louder Than War’s Paul Margree finds something for everyone at Shropshire’s Sin Eater festival.

There aren’t many festivals in the UK where you get to participate in the burning of a 30-foot high wooden hare. But that’s what you get with the Sin Eater festival, a compact little gathering in Shropshire boasting a killer line-up whose remit stretches from the more unkempt side of traditional music through to the outer reaches of psychedelic rock.

Organised by the marvellous folks behind the Lancashire and Somerset record label it also boasts a rather special mini real ale festival, courtesy of the rather fine Bridges pub, whose premises and back garden provides the venue for the weekend’s activities.

On the bill this year was the parched desert rock of New Bums – that frazzled Californian duo of Ben Chasny (Six Organs of Admittance) and Donovan Quinn (Skygreen Leopards) – Alasdair Roberts’ wyrd broadsides, the translucent minimalism of Ex-Easter Island Head and, accompanying the ceremonial burning of the aforementioned wooden beast, the hollering avant-folk of the Dead Rat Orchestra. And, as they used to say, many, many more, on a packed bill spread across a glorious sun-bleached weekend.

There’s a fairly languid vibe when I stumble into the festival site  just after it opened on Friday. I grab a cooling draft of Sin Ale – specially brewed for the festival – and lounge on the grass ready for the opening act, Dublin-based guitarist John McGrath. The tranquil vibes of his intricate fingerpicking are the perfect accompaniment to the lazy afternoon. A shame, then, that so few people were there to catch it. 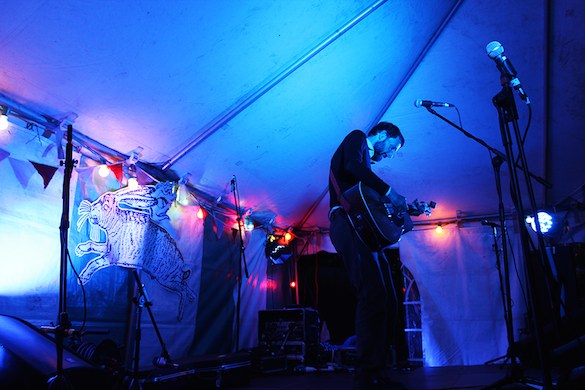 Fortunately, things soon get going, and by the time Dean McPhee’s echo-laden guitar figures float across the marquee like air bubbles in a pond, the barbecue is on, the open-air bar is serving cider and there’s a pleasing hubbub around the site. Chris Joynes plays a set of ramshackle instrumental rockabilly in the pub, on a guitar that seems to be at least 40% masking tape. As darkness falls, Alasdair Roberts (see photo above) plays the first big set of the festival to a packed marquee, his clear, high voice channelling dark tales from a point seemingly outside time.

There’s also plenty of weirdness on the bill to balance the folky stuff. Kogumaza, headlining this opening night, are a case in point, their monolithic stoner rock bending things right out of shape. For their part, the crowd really love the trio’s tribal sludgecore riffing. Heads are nodding enthusiastically, including an illustriously bearded Alan Moore lookalike whose beatific smile rubber stamps my growing feeling that this is some deep magick shit happening here. Heavy.

Friday night raised the bar high, but on Saturday, the controls were firmly set for the heart of the sun. The Family Élan got cosmic early on, their ecstatic prog-world-stoner groove a hazy fug of distorted saz and bazouki. ‘Like The Byrds’ Eight Miles High stretched to a lysergic breaking point’ is what I wrote in my notebook, which rather sums it up perfectly.

Richard Dawson’s throaty roar was another highlight. Emotionally wrenching, his murderous folk ballads and utterly original vocal delivery combined to transport us from a sunny Shropshire pub to somewhere darker, foggier and much more terrifying. Seek him out. You will be amazed. 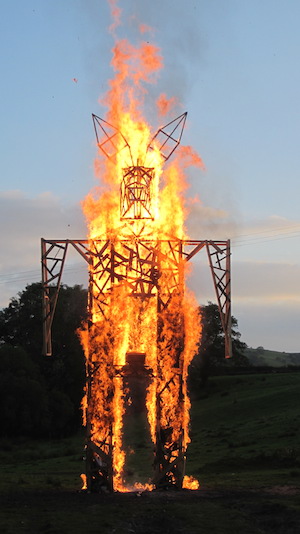 But Saturday was really all about the Hare (see pic, right, © Paul Margree), all 30 feet of it, its wooden frame looming above the festival site from its vantage point in a field next door. And there was no one better to soundtrack its ceremonial incineration than the haptic cacophony of the Dead Rat Orchestra. Starting inside the marquee, the trio played a short set of harmonium-driven chants and songs about 19th century thieves before  leading a procession out to the Hare to play out the burning.

The Sin Eater festival takes its name from a historical ritual, where a household’s sins would be absolved by the taking of food or drink. Shropshire’s last genuine Sin Eater is said to be Richard Munslow, who died in 1906. It’s no coincidence that he is buried in the churchyard next-door.

As the wooden figure of the Hare started to burn, the Dead Rats led the crowd in a massed chant of Munslow’s Sin Eater prayer, set to music by the trio. A slightly weird experience? Yes. Uplifting? Yes. A whole lot of crazy fun? Bleedin’ definitely guv’nor.

To be honest, I needed a bit of a sit down after all that. As I sip a fine pint of Sin Eater pale ale, I look over the notes I’ve taken so far. There’s so much excellent stuff it’s impossible to capture all of it. Laura Cannell’s unique reinterpretation of medieval songs and fragments. DBH’s deep solo guitar. Mann-Castell’s traditional songcraft Mugstar’s deep space knees-up.

Earlier on Saturday, I take shelter across the road, where a fantastic team from the Supersonic festival were leading a workshop called ‘Big Sounds for Little People’, aiming to introduce children to experimental music. A laudable aim, and for this session the haunted drones of Woven Skull are the soundtrack. The trio lay down a righteous hubbub as a group of toddlers jump, and bang homemade percussion in a riotous glee. It’s bloody great.

On Sunday morning, I  join Cath Tyler’s Sacred Harp Singing workshop (see photo above), an exercise in communal singing that leaves me re-energized and filled with positive vibes. Cath tells me that Sacred Harp singing was a way to while away the long New England winters in the 19th century. “Each person would bring a dollar to pay for the hall and a log for the fire,” she says. 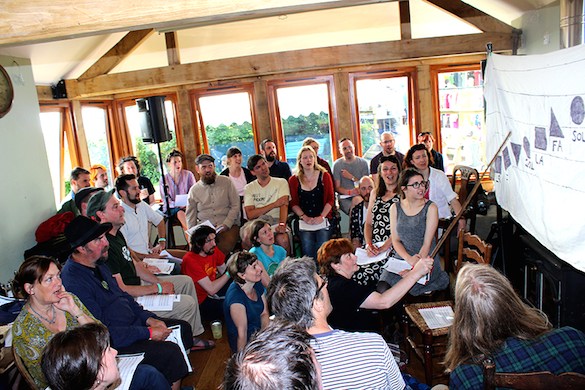 As I head back out to catch more great music, I feel like I’ve been here all my life. People start to drift off by about Sunday lunchtime as the prospect of another working week starts to loom, but I hang around, catching another great set from Woven Skull – playing for the grownups this time – and a transcendent half an hour of of Ex-Easter Island Head’s hypnotic mallet guitars.

There are still plenty of people around for final headliners Nope, who bring things to a conclusion with a thrillingly deranged noise. Two drummers, two guitarists, no bass. The result? Volcanic riffs delivered with all the subtlety of a battering ram, for 45 minutes. Then it’s all over.

Despite its pagan overtones, Sin Eater is a cool and friendly event. It’s a lovely contrast to the bigger-name festivals that clog up the music lover’s summer diary, with an all-killer, no-filler bill. If you’re at all interested in those artists exploring some of music’s less-travelled paths, you need to get Sin Eater 2015 in your diary, sharpish.

See also the photo gallery below on which all photos are by David Hand (those marked as such above plus the one by Woven Hand) and Paul Margree (all others bar the Sin Eater logo).

Keep track of news on Sin Eater 2015 at the Lancashire and Somerset records website or Facebook page.

All words by Paul Margree. More work by Paul can be found in his author’s archive. He writes about experimental music at We Need No Swords. Or you can follow him on Twitter.