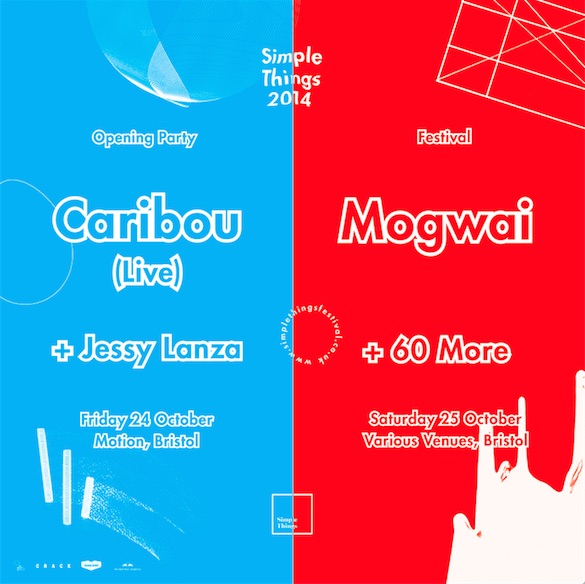 Simple Things Festival in Bristol has, since it’s inception, been one of our favourite festivals thanks to it’s sublime mix of the very best in cutting edge electronic and alt-rock artists. If you want to hear tomorrow’s sounds today while at the same time being reminded of who some the best artists of the preceding few years have been, Simple Things is the place you need to be. We’ve reviewed it a couple of times now and both times were blown away by the jawdropping list of astounding artists they booked for it each year, and with Mogwai announced as this years headliners it seems this year’s going to be no different. Full details about all the artists so far announced for ST2014 can be found below.

Mogwai have had a busy and, put simple, quite stunning year. And of course Louder Than War have been reporting on every step of. First off they released their eighth studio album, Rave Tapes, on January 20th which we reviewed, in the process giving it a perfect 10 / 10. We then spoke to the band’s Barry Burns ostensibly about Rave Tapes. That interview is here. Then came news that the band’s iconic second album, Come On Die Young, was soon to be reissued on Chemikal Underground Records, which it now has been, but before that they managed to stun Glastonbury with a show our own John Robb reviewed, describing it as…

“…inspiring and thrilling – a surge of sound that matched anything that nature was trying to throw at us – an electric storm with its own forked lightening of thrilling noise and a festival high point.”

CODY came out next which again we gave 10 / 10 too, and finally the icing on the cake, perhaps, was an interview with Stuart Braithwaite himself.

The news that Mogwai were headlining was accompanied by news that this year the festival would be preceded by an opening party the night before featuring Caribou (live) and Jessy Lanza. As some of you may be aware October 6 will see the release of Caribou’s follow-up album to Swim. Entitled Our Love it features collaborations with Owen Pallett and acclaimed Hyperdub artist Jessy Lanza, who will be main support for this show.

About bringing Caribou to Simple Things the organisers say:

“It’s a huge honour to be able to bring an artist who resonates so heavily with Simple Things to Bristol for a one-off, one-room show at Motion on the eve of this year’s festival. Please be aware that due to limited capacity, this will be sold as a separate event.”

Meanwhile, about scoring Mogwai to headline the festival they also say:

“(Rave Tapes) …mines the same potent refrain as their finest work, and it’s testament to the legends’ ongoing relevance that it hit the Top 10 UK Albums, and is the best-selling vinyl release of 2014 thus far. Bit it’s still in the live arena where Mogwai truly hits their dizzying peaks.It’s with great pleasure that we welcome their glistening aural assaults to headline Simple Things Festival on 25 October this year.”

The above was all announced a short while back with an announcement of a second bunch of artists including DJ Harvey, Zomby, Evian Christ, Kode 9, Haxan Cloak, Nightmares on Wax, Turbowolf and Eagulls being made soon after.

Just yesterday the organisers dropped more news about the new additions which include Liars and Black Lips. The full list announced yesterday is:

Tickets are being sold on a tiered basis and all the early bird slots, plus the first and second level tickets, have now gone. There are still two slots left so if you hurry you can still save yourselves some money! It seems highly probably that tickets will sell out so you’re advised to buy one if you want to attend – the sooner the better if you want to save some money!

Our review of last year’s Simple Things Festival is here.

The full lineup announced so far: 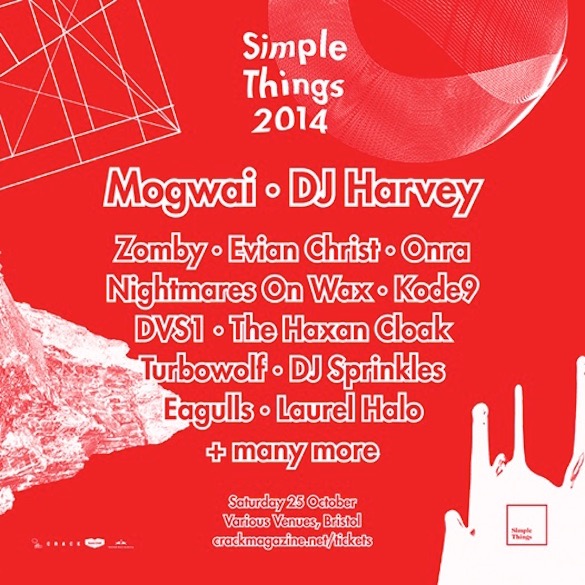 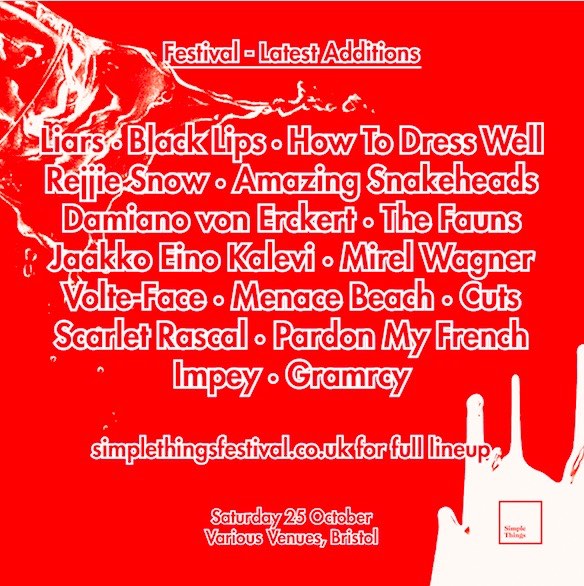