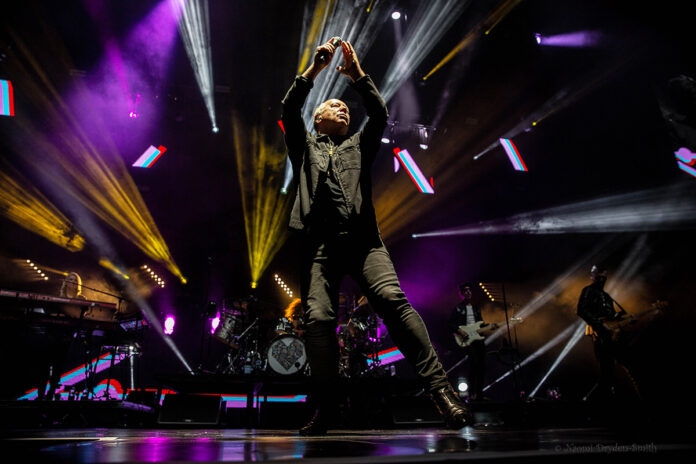 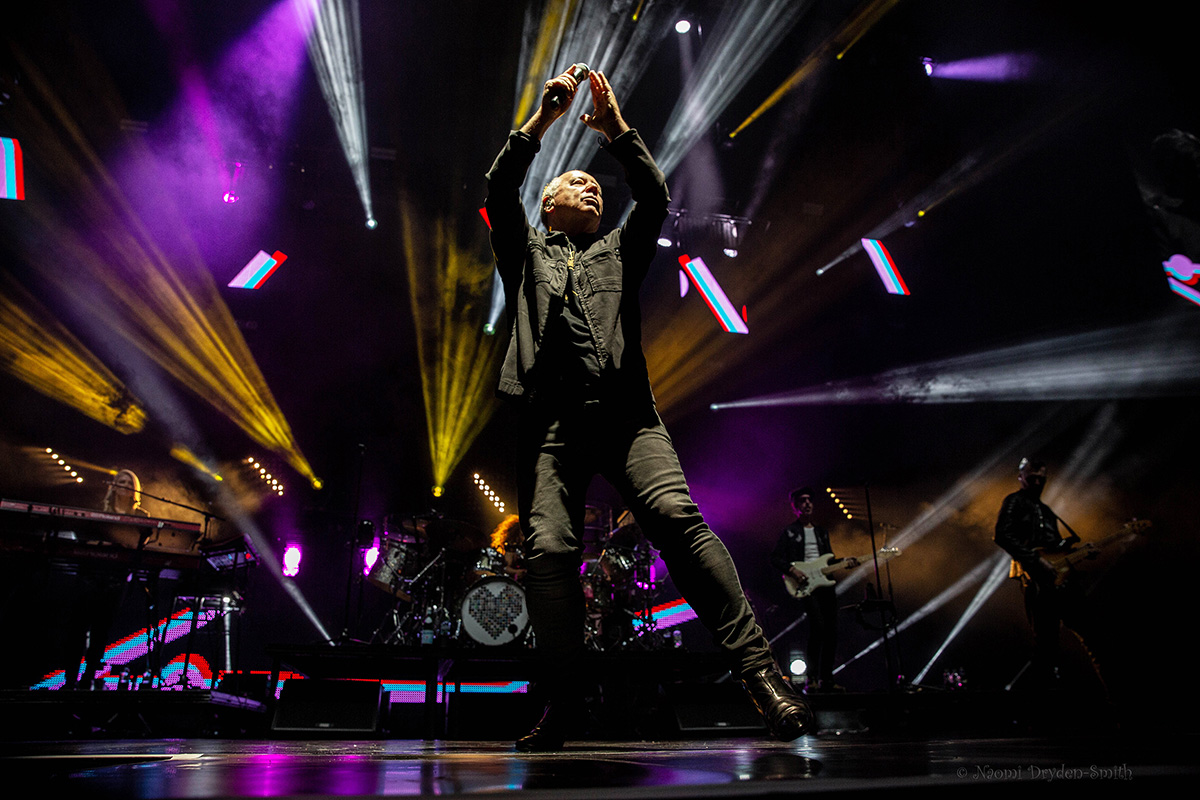 What do Will Smith’s Oscars slap and Jim Kerr’s trousers have in common?

The question is starting to form in my head this morning, as I tumble downstairs in search of coffee.

Last night I drove the 240 mile round trip from London to Bournemouth, to see Simple Minds, getting home around 1.30am.

So today, after rising late and stumbling into the kitchen, I’m met by Georgie, my effervescent and bubbly, 30-something year old lodger.

“How was the gig last night?” she asks.

While most people might have easily answered with a monosyllabic: ‘good’, or ‘bad’, or ‘great’, I pause. “It’s not quite that simple”, I tell her. Expressionless, Georgie maintains eye contact with me for a few seconds while I gather my thoughts. “I want to write a thousand word story, and I’m still trying to figure out what goes in it”, I explain.

I was supposed to go to Wembley to meet LTW photographer Naomi, but some crazy shit happened, I didn’t make it, and ended up driving full speed to Bournemouth and back. So I have to put that in the story.

Maintaining a steady gaze, Georgie nods as I fumble with the coffee packet.

When I was at school, I tell her, my mate’s big brother Marky McNeill got me into them. He gave me Changeling, one of their first singles. They’re from Glasgow, my home town, so the whole growing up with Simple Minds thing, and how everybody loved them has to be part of the story too. 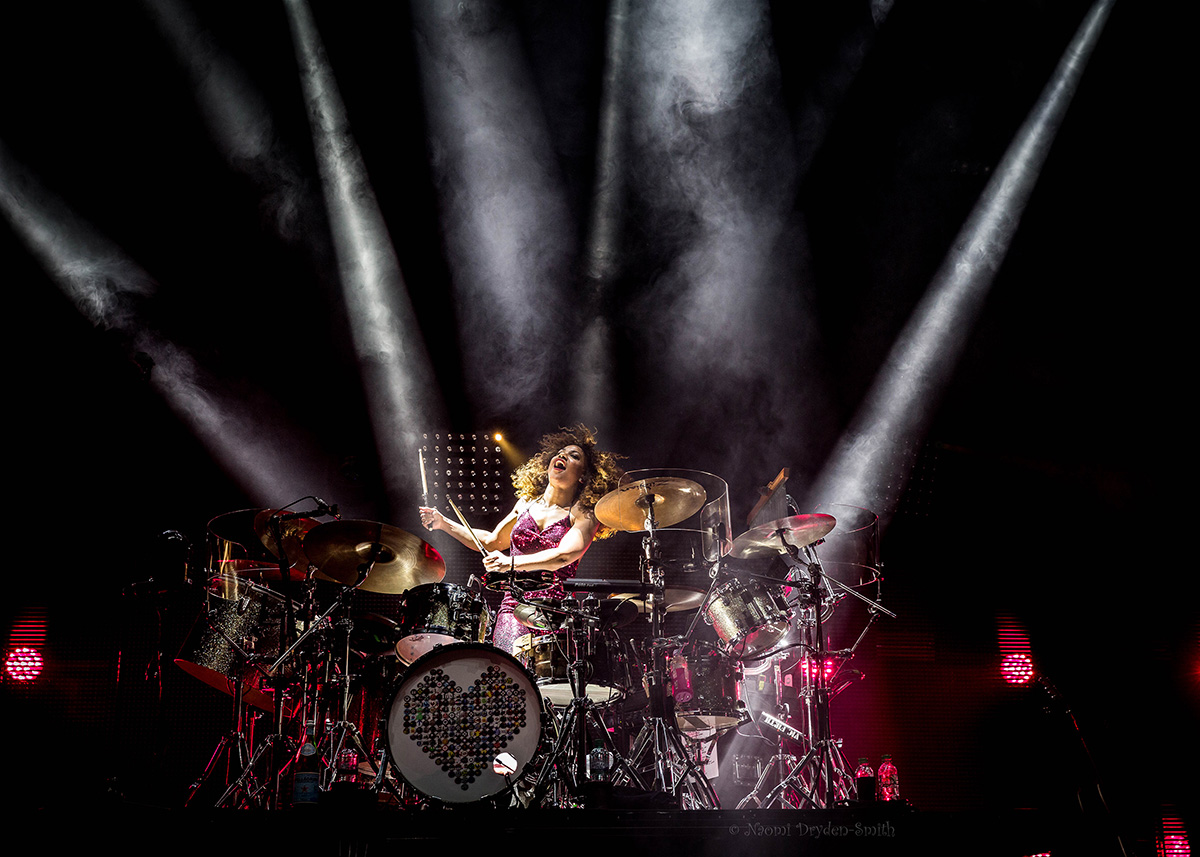 Also, I chatted with a Polish woman, sat next to me last night, called Martyna. Her older sister had got her into the band, and coincidentally, Jim Kerr took time to thank an old pal of his in the audience who had been an influence on him as a kid, getting him into music.

Martyna went on to say her sister was worried about the rise of the right wing in Poland. She was afraid they would hook up with right wing Ukrainians who had fled the war.

I thought she was really interesting and I’d like to put her in the story too. It would link because Jim had also talked about the “stuff that’s going on in the world just now” when introducing Belfast Child.

“Jim?” says Georgie slightly blank “Who’s Jim?” There’s a slightly awkward silence. Jim Kerr, the singer, have you heard of him? I ask. She shakes her head. You have heard of Simple Minds though, I ask. “Kinda, well no, not really” she says without the slightest tone of embarrassment in her voice. 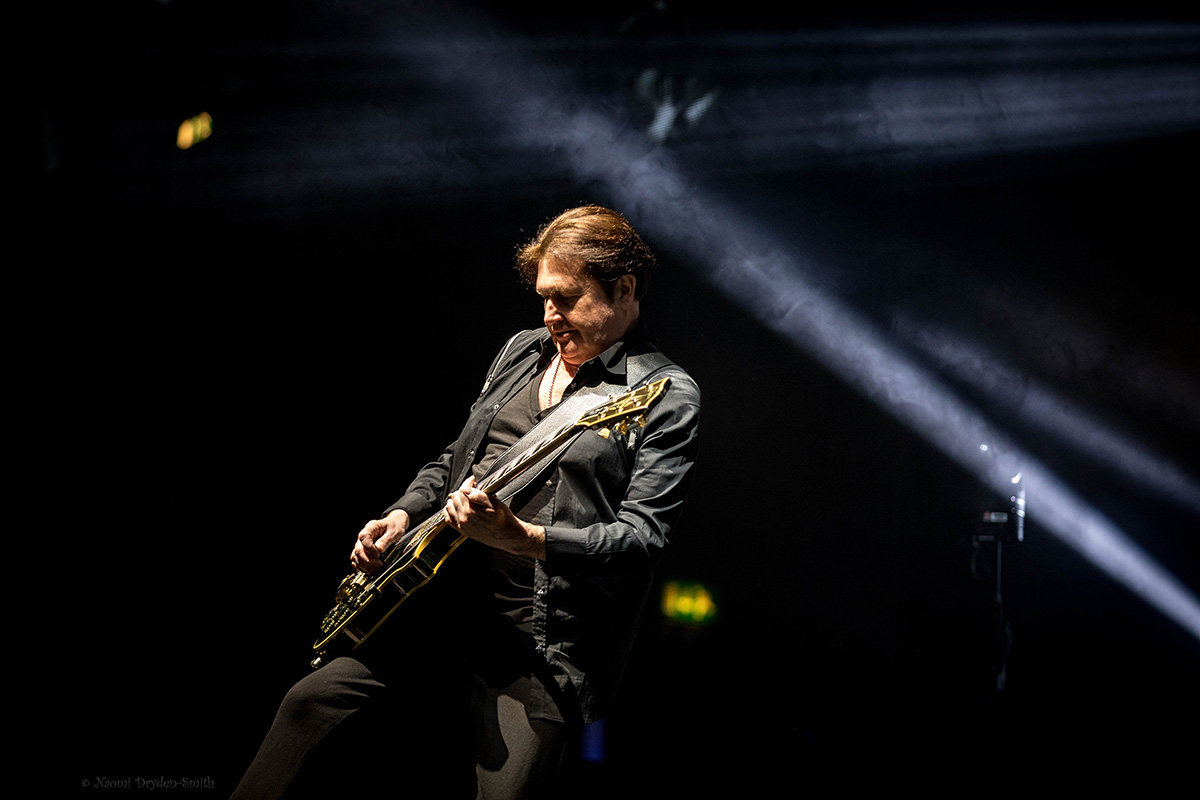 Ah, okay, I realise I have to give her a bit of background. Simple Minds started off in the late ’70s as punk outfit Johnny and the Self Abusers. Their edgy sound quickly evolved into slick, rhythmic keyboard melodies with sweeping atmospheric guitar and they quickly dominated the middle ground between, new wave, new romantic and synth pop.

The culmination was their 1982 album New Gold Dream (81-82-83-84), possibly the definitive and definitely one of the greatest albums of the ’80s. However it was 1985’s Don’t You Forget About Me, from the soundtrack of the $51m grossing, coming of age comedy drama The Breakfast Club, that would top the US Charts, and propel them into true stadium superstardom.

And now they’re out doing their 40 years of greatest hits tour, postponed from 2020. “Oh wow, really” says Georgie, grasping the magnitude of Simple Minds. “So were they good?” she asks, pouring coffee in her own mug.

The band were great, I tell her. Really great. They looked great, sounded great and the light show was phenomenal, an immense and expensive production with dozens of roboscan lights and digital backdrops. The crowd went mental. I pause to sip my coffee. 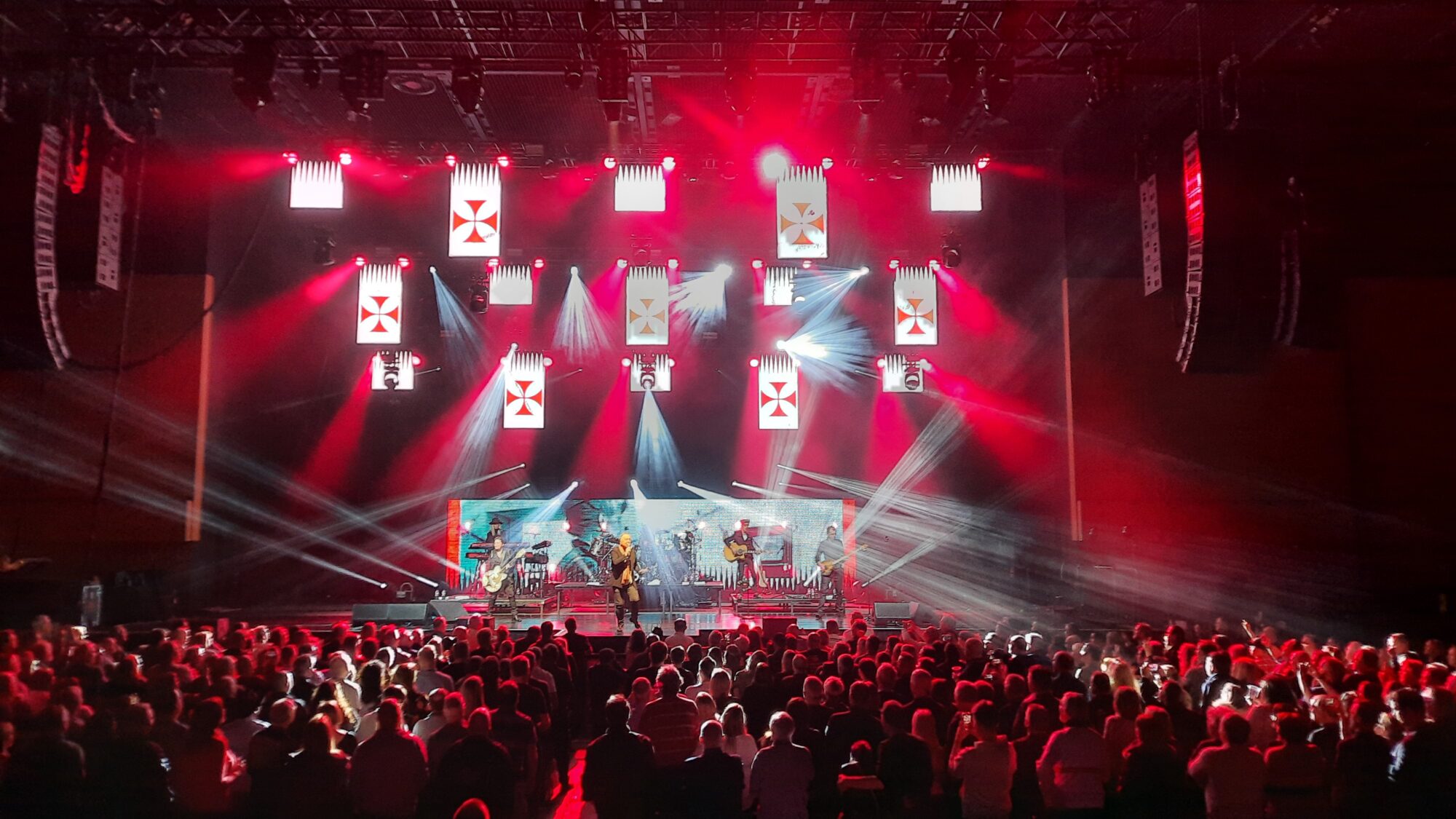 “But?” says Georgie, she senses there’s something I’m not saying.

There are two original members, I tell her, the singer and the guitarist. Of the new members, Cherisse Osei resembles a young, powerful Tina Turner, precise, dynamic and flamboyant on drums. While Keyboardist Berenice Scott manages to balance much of the musical heavy lifting with supermodel duties.

Ged and Gordy on bass and guitar look great, while Sarah Brown, who joins them from Book of Brilliant Things onwards, is just jaw dropping both as a vocalist and a stage presence. Charlie Burchill, founder member and guitarist, looks top drawer too; a smart, stylish rockstar

But Jim…I pause again. You’ve really never heard of Simple Minds? “No” reaffirms Georgie. Well Jim Kerr was renowned, he was famous in fact, for being this catlike god on stage. People raved about his graceful movements, his elegance, his originality.

Well he’s still got the grace, you can see it, when he’s up on his toes, I imitate, pointing my leg, crouching, circling, sweeping my arms sideways.

But he was wearing these skinny jeans, and a T-shirt. Georgie laughs. She’s guessed where I’m going with this, why I’ve been troubled.

It’s a long show, I explain, starting with really early material; Act of Love, I Travel, Celebrate. But it’s split into two halves, I tell her, and they play so many huge tracks; Promised You a Miracle, Alive and Kicking. I feel my heart beat, I’m reliving last night’s excitement. Or perhaps that’s the coffee kicking in?

So, Jim says to the crowd “We want to give value”, and they roar with laughter,  they love him, he’s a great frontman. I’m speaking very quickly now. Oozing lovely-bloke warmth and wit, an intelligent and self-deprecating man, fully engaged with his audience. 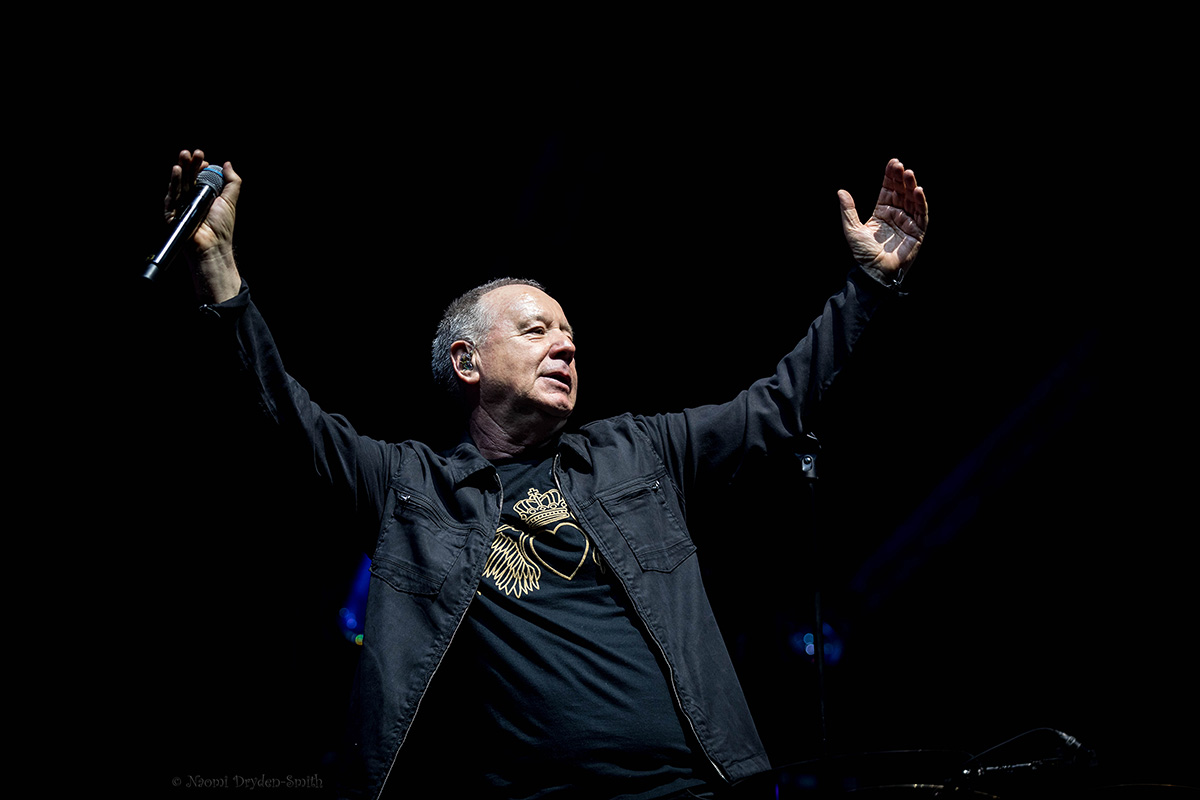 The young woman next to me, Martyna and her boyfriend were super excited, inebriated, and almost ecstatic to be here tonight, jumping in their seats, singing. After the interval, they returned, each carrying a two-pint plastic beaker of lager.

She was half way through her beer when she turned to me and shrieked “His jeans are just so wrong, the skin tight jeans, nooo”. I’d already scribbled something in my 50p notebook, and I had to agree with her.

After that, all Martyna could say was “Nooo, wrong, wrong Jim, wrong, I love you but no, not the skinny jeans”. And from that point, all I could see was skin tight denim shrink-wrinkling around Jim’s uprights and nether-regions. The expensive light show and the beautiful people were banished to the periphery of my vision.

He really should have employed a stylist. “Or maybe his stylist just did a really bad job” interjects Georgie.

Kerr makes a lot of jokes about Scottish people being tight with money. So I wonder if he actually is too tight to pay a stylist? Like I say the rest of the band look fabulous, perhaps they were styled or perhaps they just naturally have decent dress sense. 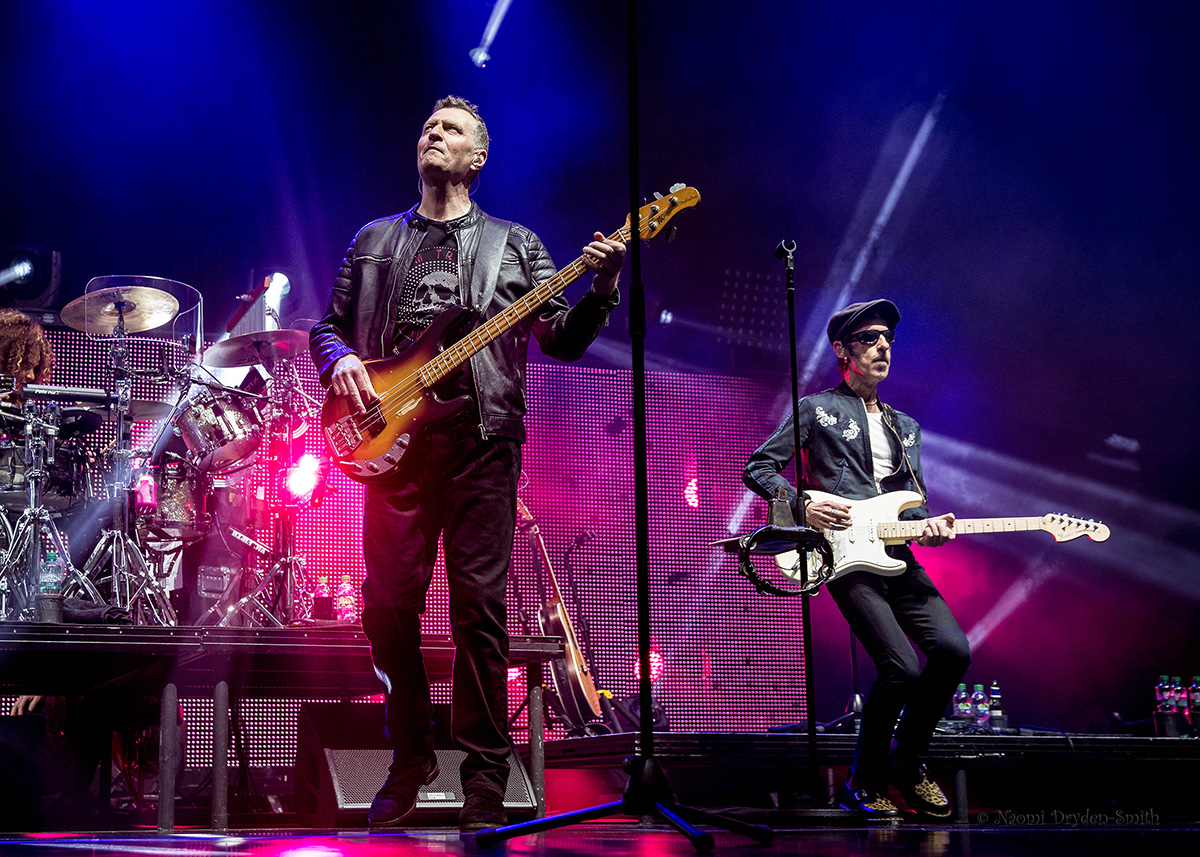 As I was leaving, I overheard one of the staff talking to another…and distinctly heard the phrase “dad dancing”. I’d already written that in my note pad too, and I’d also overheard the phrase at the bar during the interval.

Somehow, sometime, the godlike elegance of the cat god who graced so many stages had transcended among us as a dad dancer. Now to be clear, in my mind that’s not a bad thing, I’m a dad and I dance; and I embarrass my daughter.

And to be equally clear, Jim Kerr is a great fucking dancer. He’s such a good dancer that I want him to be my dad. Okay that’s impossible because I’m 56 and he’s 62. But I want to have Jim ‘roon oor hoose fur Hogmany wi a few cans. Not because I want a rock star in here, in the kitchen, I tell Georgie, but because he’s such a fucking good dancer.

I’m serious, the dancing is good (apart from the down on the knees, limbo style bit). I love Jim Kerr and I love Simple Minds. I always did and I always will. If only he’d hired a stylist to have a look from row Z, or at least, not worn the skin tight trousers, my night would have been perfect.

Georgie is grinning broadly now. So I still don’t know what goes in and what doesn’t go in the story, I tell her. “Just go upstairs and write down everything you’ve just told me” she says. 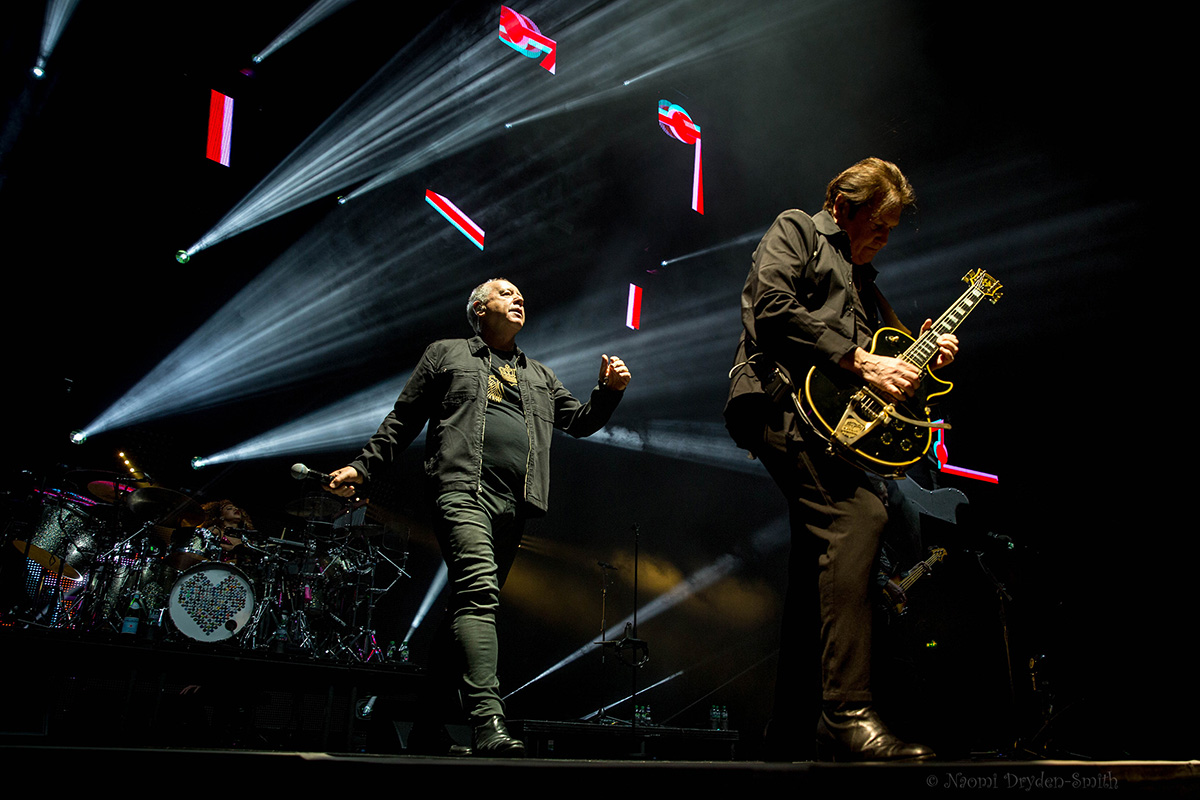 For details of all Simple Minds live shows visit