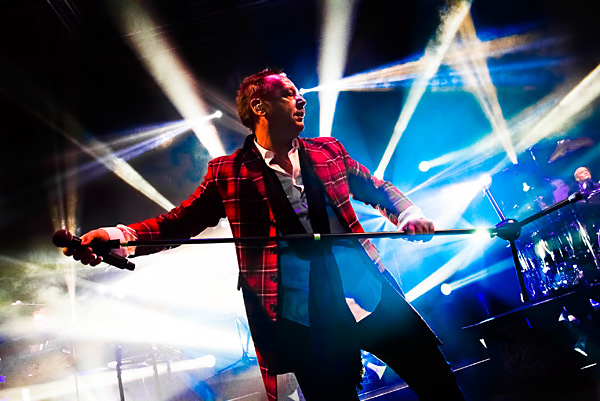 Simple Minds are on great form, providing a timely reminder of their arena packing heyday as they open their UK tour to a packed house in Grimsby. idp reports.

We don’t get many visits from big name bands either and when we do it sometimes feels like they only bring half their kit and only really give it half their usual effort. “It’s only Grimsby lads, save some energy for Wolverhampton,” we can almost hear them say as they wait in the wings.

So when a band of the calibre of Simple Minds decide to open their UK tour here it’s a big deal and the Auditorium is appropriately packed for the show well before kick off. From the moment Jim Kerr struts onto the stage in a bright red tartan frock coat (apparently he’s Scottish) it’s clear that there aren’t going to be any half measures at this show. I’m not sure I’ve ever seen anybody look more pleased to be on a stage and he seems to be genuinely impressed with the response from the packed house, as well he might be because the crowd are cheering and singing along right from the start. 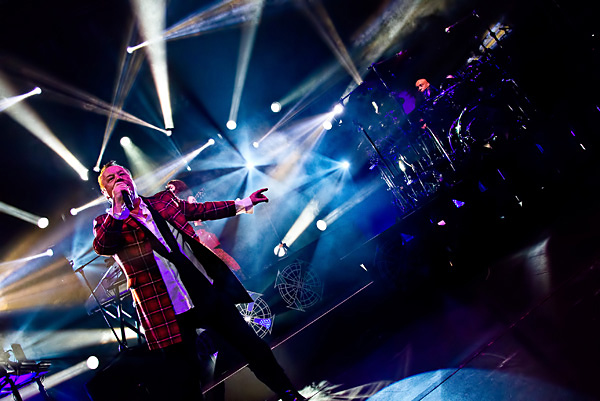 With a back catalogue as long as your arm and a well received new album (last year’s Big Music) to boot Simple Minds are never going to be short of tunes to play but they do their best to pack as many as possible into the set, which allowing for the break runs to over two and a half hours of high intensity performance. Nobody leaves complaining that they didn’t get good value.

It seems to have been fashionable among reviewers of Big Music to praise the parts of the album that hark back to the band’s early output and to be slightly dismissive of songs, like the title track, that evoke the stadium filling sounds of the late eighties onwards. But if we’re being honest here then for me, (and for lots of others judging by the reactions of the crowd on the night), then it was from Sparkle In The Rain that Simple Minds really made an impact on me and I have no problem with them revisiting that era.

With Mel Gaynor’s insistently snary percussion and Andy Gillespie’s keyboards providing the underpinning for the anthemic expansiveness which nowadays characterises the Simple Minds sound, the band seem to sound even more eighties today than they did in the eighties and the new songs blend seamlessly in with the classics. I won’t claim to be a Simple Minds expert and there are plenty of occasions when I can’t decide whether we’re listening to 20th or 21st century vintage but in this relatively small venue, which has a remarkably good acoustic for bands that can crank the volume up a little, it feels that we could almost be at Wembley or The Shea with Thatcher and Reagan chatting over coffee and looking deep into each other’s eyes just down the road. 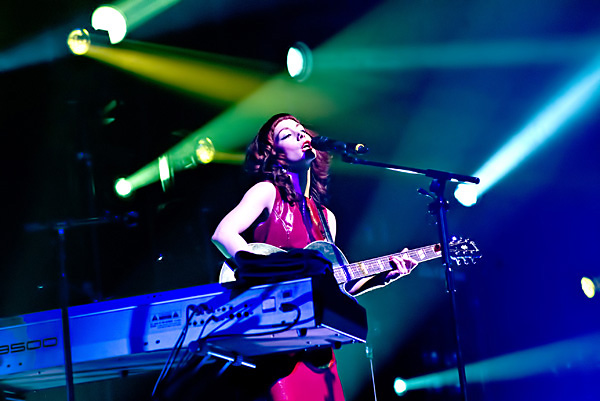 Good though the band are, with Ged Grimes unerring on bass and of course co-founder member Charlie Burchill laying down his trademark flickering guitar alongside those already mentioned, it’s Kerr who is the undoubted star of the show, grinning like a Cheshire and constantly in motion, leaning out across the pit to hold the microphone towards the audience, bounding around the stage twirling the mic stand like a dandy with a long cane, or doing what would probably be dad dancing if I did it but which looks rather cool when he does it , he’s a non stop ball of energy chatting with front row, discussing football or waving to people in the balconies. I read in an interview that he hung out for a while with Springsteen in New York and it’s the Boss’s kind of boundless energy and inclusiveness that he displays here. At the end of the gig half the people present will feel like they have had a momentary intimacy with the star of the show, and that’s quite a skill.

The first half of the set is predominantly rock and acoustic tracks (for which the band are joined by Welsh multi-instrumentalist Catherine AD who stars when she switches to keyboards for a stately Rivers Of Ice) and the second featuring soul vocalist Sarah Brown who takes a solo on Book Of Beautiful Things and backs up magnificently on Sanctify Yourself, on which Kerr is so convincing in his role as a revivalist preacher that you wouldn’t be surprised if he pulled a handful of rattlesnakes from the pocket of his black jacket (costume change during half time interval).

Highlights of the show? That’s a tough call and it’s always tempting at this point to pick an obscure track and say how nice it is to see it getting dusted off for the first time in twenty odd years and how you’ve always loved it and felt it was under appreciated but actually on the night it’s Don’t You Forget About Me which starts as a booming monster delivered across a sea of waving arms and mobile phones and gradually morphs into something small and intimate as Kerr lead a call and response singalong from a seated position at the front of the stage. 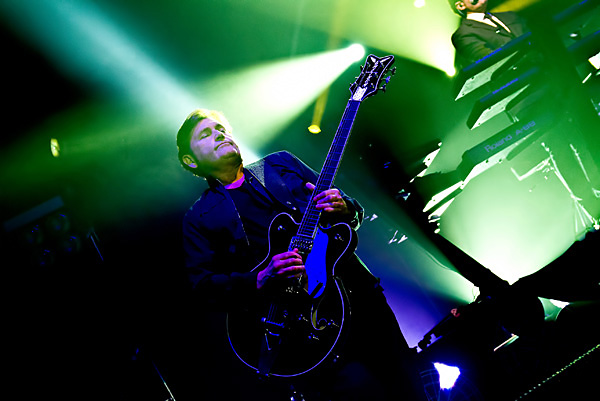 From pure eighties over the top stadium rock to delicate and emotional choristry in two minutes or less – it’s some trick and serves to prove that for this tour Simple Minds are a band back on the top of their game. The encores end with Riders On The Storm, as dark and malevolent as the original, and finally Alive And Kicking. As we file out and wait for twenty or thirty minutes to get out of the car park I can hear a lot of people singing tunelessly in their stationary cars and the town seems quite cheerful, almost. But don’t let it fool you.