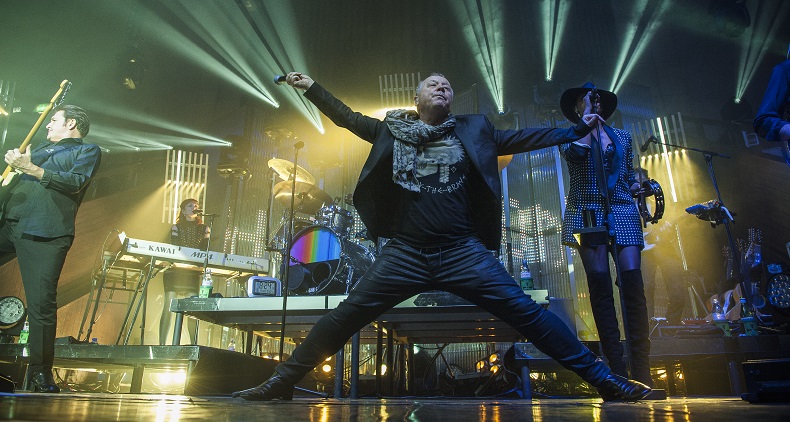 One of three gigs to showcase their new album saw Simple Minds taking in their hometown Glasgow (naturally), London (naturally)  and  thankfully, a stop off in Manchester in between. We catch Jim, Charlie and the gang as theymove on up to the front; a short, sharp, sneak attack yet you could never call a Simple Minds gig low key.

A stunningly atmospheric venue in which to play, the Manchester Albert Hall, a former Wesleyan chapel, is simply made for a Simple Minds gathering; an event, a musical celebration in a place of worship. And no holds were barred, nothing was held back, this was a proper show. No concession to the acoustic format that saw them last in town at the palatial Bridgewater Hall. This was a crammed in, standing up, fist pumping rock show with all the bright and shiny things that you associate with The Minds. 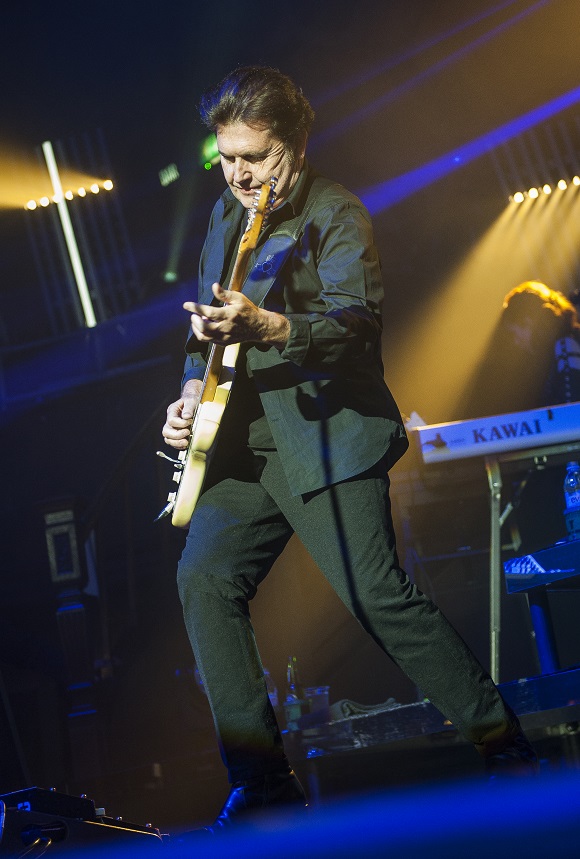 Jim Kerr and Charlie Burchill remain as the heroic core of the 2018 version of a band that’s ploughed a rocky course over its forty years. From the fledgling  new romantic influenced, electronic beginnings into becoming  a politically aware  arena and stadium act before emerging from a period of fallow years in a version that  shows a willingness to evolve and not dissolve into the heritage act circuit.

Proof comes in a new album that fairly reflects their current position and standing. What they call the latest instalment of moving forwards. Yet there seemed a sense of the nostalgic with a slew of Eighties music drifting across the pa pre gig; you can never underestimate a touch of Talking Heads as a warm up to the simple yet similarly familiar “Let me see those hands,”  – the order  JK likes to proffer in the same way  he has for the past few decades. Decades too which have continued to see the Kerr  troosers getting a thorough testing as Jim knelt, stretched and straddled his way through  an opening volley of songs from their formative years.

The combination of the old and the new in a format that allowed for a couple of short breaks (“we can’t play more than four songs without having to sit down”), their origins were strongly to the fore in that early days opening volley before they sat for the first of two short breaks to chat with Billy Sloan over Manchester memories. Dialling into reminiscences of their visits to Manchester with Charlie reviewing singles on local radio with two guys with stupid names, they were in a band too with a couple of albums already out. An Irish outfit known as U2.

Having set the scene, the notion of gamely running down the new album in full – played in two chunks as in both sides of the vinyl record – was the concession before the downhill slalom and eight song finale of classic Minds. And for all the focus on the reinvention of Simple Minds, their key moments remain rooted in the eighties. The pulse of Waterfront and the communal quality that induces masses of  hey-hey-hey’s and oodles of whoa –ho-ho’s during the non stop flow of the greatest of the greatest hits from the mid Eighties glory days occasionally had the goosebumps prickling.

However, it was the not quite unusual inclusion of Ewan MacColl’s Dirty Old Town (a bonus track on the new record) that proved a significant and cunning ploy. Not a band who’re averse to digging out the odd folk song – they’ve hit  #1 on the charts –it was totally apt that it should appear in a gig as close to MacColl’s Salford as dammit. They could sure teach the young bands a thing or two; a canny pair these Scots boys.