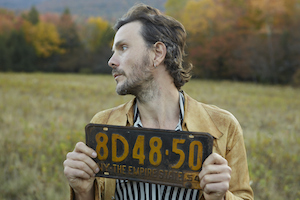 The new album from Simone Felice, Strangers, is a glorious realisation of raw emotion and crafted songwriting.

As he heads off on a UK tour we catch up with him and chat about the songs that mean the most to him.

Lucinda Williams – Fruits of My Labor

This quite Possibly my favorite love song of all time.

Like everything he turned his hand to, like every song he sang, it was for the people, the community. He never gave up on the thought of a better world, he split his own firewood into his 10th decade on earth, and his fire can never be put out, it’s imperishable.

I’ve been times through Waterloo station, and the last word that would come to mind is ‘paradise’, transcend the drudgery and grime of everyday life to something holy.

Townes Van Zandt – To Live Is To Fly

This set the bar for us early on, I can’t think of more perfectly written song, it’s back-road, parking-lot mysticism… ‘I’ll miss the system here, The bottom’s low and the treble’s clear. But it don’t pay to think to much. On things you leave behind’

Sandy Denny – Who Knows Where The Time Goes

Crippling in its haunted beauty, isn’t she our tragic heroine? Our unsung songstress of the mystic beyond.

This was one of my favorites songs when I was a kid in the ’80s. I played my cassette tape till it broke. Recently I rediscovered this diamond in the rough, the raw frenetic magic it weaves is just as intoxicating today, and even more so in a world of computer generated, meticulously button-up pop.

Joni Mitchell – For The Roses

The most honest, behind-the-scenes take on the seductive poison of the music business. Welcome to the machine.

An old friend put this song on a mixed-tape for me a very long time ago. Every time I hear it I’m transported to this strange little village in the mountains, a dream-place, a fable eerily close to my waking world.

The recording and arrangement, the harmonies, but most of all the distillation of the lyric strike me dumb. We are all 13 when we close our eyes and listen, awkwardly and painfully in love for the first time.

I remember so vividly driving up the New York State Thruway with my mother in our shitty little black Ford Escort when I was 6, and hearing the line ‘… and then we went up to Saratoga to see the total eclipse of the sun’ feeling like she was singing just to us. Long live soft-hits radio!

He is also on tour. See him at: