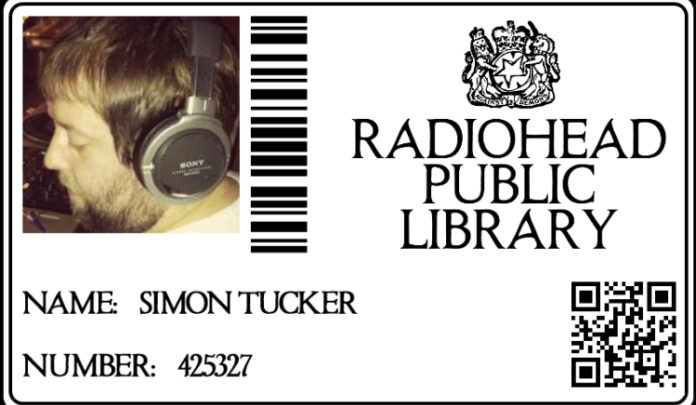 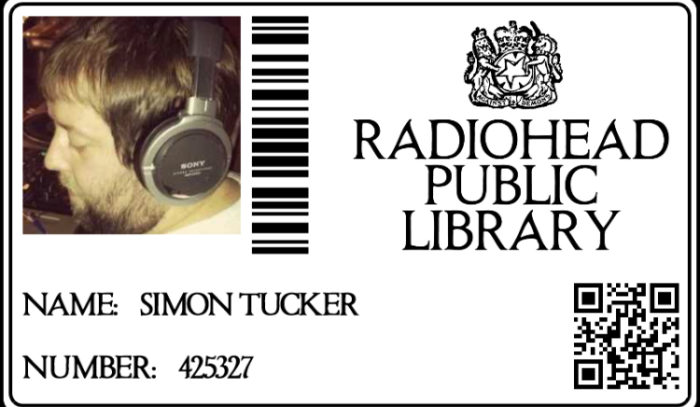 With the opening of the Radiohead “Public Library”, a massive online archive of everything the band have ever done, we thought we would send our in-house self-confessed fan-boy Simon Tucker through the shelves to pick out the best bits for Louder Than War.

This is the mother load. The peak. The marriage-threatening level of content any Radiohead fan could dream of. Scrolling through the new Radiohead so-called Public Library properly can take days..you may not see your loved ones or outside for a while…but hey it is worth it when you are this deep into the Radiohead vortex. It is an intimidating amount of content to get through so let me point you in the direction of my personal favourite bits..you can then feel free to tell me I am wrong in the comments section below before highlighting your own personal fave sections. 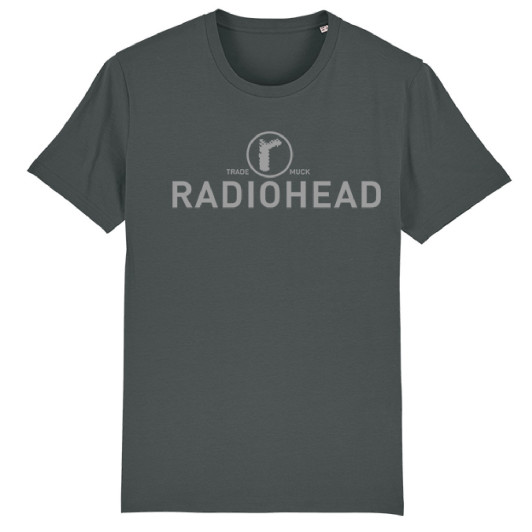 You will never have to chase that ridiculously priced classic t-shirt design from 1997 again or settle for cheap imitations. Within the library are sections focusing on recreated t-shirts from each era of the band’s career made to order. This includes the classic “Trade Muck” Tee from back when Pop was Dead and apparently anyone cold play guitar. The designs by Stanley Donwood / Thom Yorke get progressively better over time but for this writer the best period for Radiohead T-shirts is the Kid A / Amnesiac period…more of which later. 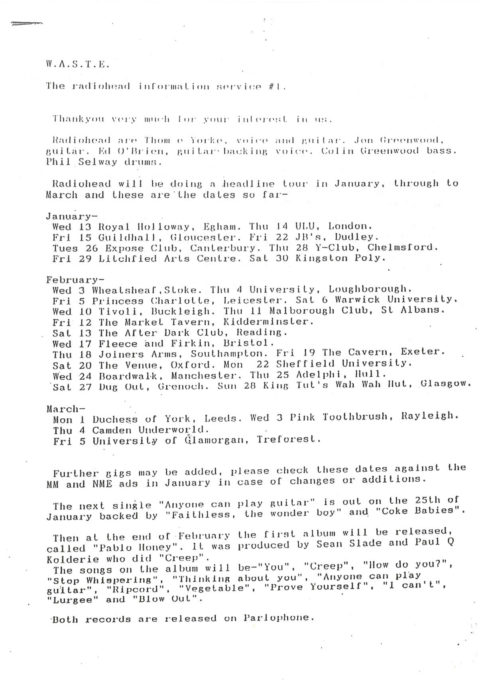 When you go back to the early days of the band you come across a section full of old newsletters for subscribers to W.A.S.T.E. These are really good to revisit as you see the bands sense of humor (they are not the pure doom and gloom merchants that they are painted as you know) and you can see how the little steps they were taking were helping them progress including playing Israel where Creep had become a surprise success..

Now we are getting to the real gold in the archive and probably the content that will keep many a fan locked in to the site for hours at a time. The amount of live recordings in the library is staggering and here are a few of my favourites:

Nearly three hours of the band taking another lap around The King Of Limbs. I still stand by the fact that to date this is one of the bands best tours aided in no small part by the inclusion of Clive Deamer on percussion who helped fill out the sound. The set list includes the “hits” and also fan favourites like The Gloaming, The Daily Mail and Kid A. The tour that supported TKOL was proof that that album was unfairly underappreciated by many of the band’s fans as tracks such as Bloom, Lotus Flower, Give Up The Ghost, and Morning Mr. Magpie sounded great live and easily stood up to the bands more celebrated songs. This tour was also the first time I wrote for LTW so you know…sentimental sod and all that.

Hell to the fuck yeah. What a gig. Everything about this is on the money. The red and black lights, the bands playing..Thom’s voice. Taking Kid A out on the road five days after release the footage we have here shows a band shrugging off much of their past with a set-list that is focused 90% on Kid A with only Just and Paranoid Android making the film. There is an air of aggressiveness to the band’s performance that suits the material. This gig also contains one of the finest renditions of How To Disappear Completely with obligatory cheers from the crowd when Thom sings “I float down the Liffey”. Simply stunning.

Good to watch the Pablo Honey and The Bends material live again..also serves as a reminder of how the band improved a LOT in a short period of time.

Later with Jools Holland special. The celebrated OK Computer era one is also here but for me this is the better of the two. Nasty, loud, soaked in electronics and jazz..Kid A and Amnesiac five song set (with The Bends thrown in at the end)..it’s footage like this that reminds me why I love this band. 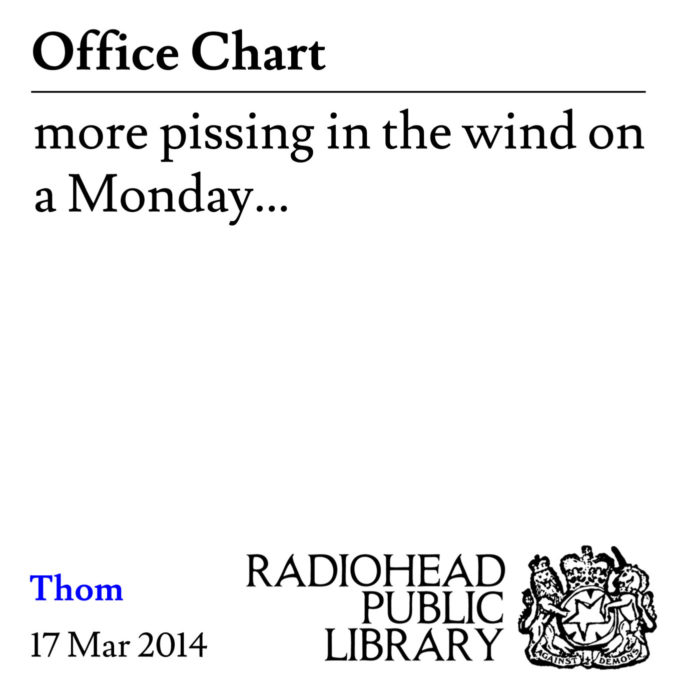 2011 – 2015 collection of the famed Office Charts where Thom would post a list of songs he and the band were enjoying only this time they have been compiled into streaming playlists so no need to struggle to find that random 12″ on Bleep anymore if you just want to hear the track. Interesting and varied..the band make good curators.

Throughout the site there are various clips which the band had initially released on their site throughout the years showing the band in the studio, relaxing, DJing. These clips are a fun watch as you get to hear the bare essence of songs that would later get the full recorded treatment plus songs that have still not yet been completed / released.

I could go on and on about this archive and what an absolute treasure it is for fans of Radiohead. You can go through the artwork of Stanley Donwood, revisit the Kid A “blips”, watch all of the bands videos or just get an absolute shit load of t-shirts. Whatever is your poison it is here ready to be served so go and dive right in and please do feel free to post your personal favourite bits below.