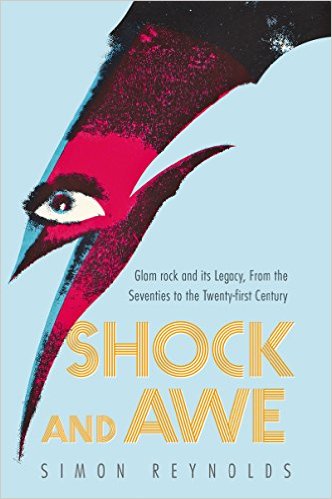 pre order the book from here
At last – glam gets a proper and thorough re-assessment.

Glam rock has been for far too long a lost corner in the pop culture empire.

Easily parodied it has been shoved aside by the serious music fan and mainly removed from the narrative apart from its golden knights like Bowie and Bolan and even Marc is treated as a two year pop moment instead of a seriously great pop artist.

Glam has become a byword for excess with a undercard of hobbits dressed in tinsel when, in reality, it was a truly thrilling pop period to grow up in and maybe the truest pop period of them all.

I grew up with glam rock and no matter how much punk rock was the key to my life’s adventure it was glam rock that meant everything. One day I wanted to write the book on glam but Simon Reynolds has saved me the effort as this is a fantastic, in depth and affectionate look at the musical form that is a triumph in pop culture writing.

Of course Simon Reynolds has got form- the former Meldoy Maker writer is one of the heavyweights. He’s written some of the best received books about music in the past ten years – his post punk tome – Rip It Up – is one of the great music books and redefined that period but in many ways Shock and Awe is his best work yet.

Whilst post punk was relatively easy to get all serious about, almost being designed for cultural analysis, glam rock has, for so long – apart from Bowie, Bolan and a few others like Sparks and Roxy Music, been consigned to the pop culture dustbin that it takes an almighty effort to reevaluate the form.

Reynolds has done this brilliantly, telling the tale of when British pop culture was at its most lunatic and intense. A time when nearly 20 million people a week watched Top Of The Pops for the latest missive in the dayglo insanity conveyer belt. It was. A time when the children really did go insane and every week a clutch of treasured seven inch singles would be released.

The writing here on Bowie and Bolan is, of course, brilliant and we could read for ever about their genius but what I truly love about this book is the affection for Slade and the Sweet and the so called also rans – the groups who were actually bigger than Bowie at the time but have been critically ignored for years. Even Geordie or the Jook get warm write ups!

Like Jon Savage in his England’s Dreaming book on punk rock it’s Reynolds love of the music that seeps through the sentences and makes the brilliant analysis and in depth think pieces explode with life.

Not only does he contextualise everything, from the riotously brilliant pop genius of Slade reflecting the grit and grime of the Black Country in a celebratory series of classic hit singles that soundtracked the British love of a good time despite everything or the Chinn Chapman songwriting genius that fired the underdog bands like Mud to being the best selling singles band of 1974 with great singles, I loved all these groups and still do and it’s great to read about them in this beautifully explained pop culture context.

Simon Reynolds also places the whole book into its timezone. You can sense that rush of a new pop generation defying the sixties monolith with its own soundtrack with the first generation gap in pop culture and the first time that their hip older brothers and sisters found themselves tutting just like their parents had done before them.

Beautifully researched and written this is a book that changes perceptions and sets glam in its rightful place as a bizarre and artful and thoroughly exciting half decade of great gonzoid pop, mental rock n roll and art school insanity that was a great soundtrack to grow up to.

It tells you why it happened, who made it happen and above all why it sounded so great and makes you want to listen to all the music yet again but with an understanding of why it even occured in the first place.