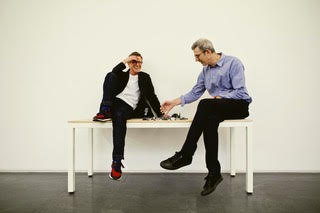 Celebrated composer Simon Fisher Turner and ceramicist / author Edmund de Waal have announced the release of their collaboration ‘A Quiet Corner In Time’.

The project (due out on the 27th March via Mute) began life as a sound work created by Fisher Turner for de Waal’s architectural installation, – one way or other -, at the Schindler house in Los Angeles, and since then has metamorphosised into a standalone album release.

Many of these recordings were made during a two-day trip around sites significant to de Waal and Schindler, chosen by de Waal. Fisher Turner and de Waal travelled to places that Schindler had been, but also places that had deep significance for de Waal’s own family history, described in his prize-winning best selling memoir, The Hare With Amber Eyes (2010). Fisher Turner’s ‘guerilla’ recording style (which also exists as a bi-monthly project with Touch called Guerilla Audio) allowed for what de Waal calls “a creative taking back”, describing a feeling of recuperation, and of finding something that has been lost. The thrill of trespass as part of these anarchic recording sessions has added resonance for de Waal, particularly around the Kunsthistorisches Museum, where art looted from his family by the Nazis was kept. “You just have to look as though you’re there with purpose,” says Fisher Turner mischievously.

– one way or other – and the album release, A Quiet Corner In Time – represents the first time de Waal has collaborated so closely with a musician. In terms of Fisher Turner’s work, this piece draws his past into the present, referencing his early sound work for Derek Jarman’s films, which included Caravaggio (1986) through to Jarman’s final work Blue (1993). The collapse of past into present is also a core theme of de Waal’s work, and he has consistently broken new ground through critical engagement with the history and potential of ceramics, as well as with architecture, music, dance and poetry.

Edmund de Waal can be found via his website