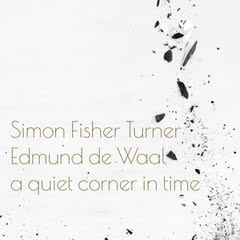 A Quiet Corner In Time began life as a sound work created by the composer Simon Fisher Turner for renowned ceramicist and author Edmund de Waal’s architectural installation, – one way or other -, at the Schindler house in Los Angeles, and since then has metamorphosised into a standalone album release. Simon Tucker reviews

Art is what you bring to it. Whatever the artist was trying to convey at the time of a works creation is irrelevant when it comes to the viewer / listener’s reaction to a piece. We frame art within our own lives and whatever may be affecting it at any given moment. In the case of music, a song / album can have a different meaning each time you listen to it depending on your personal situation. It can make you joyously happy one day…heartbroken a week later. Artists also have no control over when their art will connect with an audience. You have release dates, PR schedules etc but often albums are completed many months before they are heard by the public so there is no telling what kind of world their music will be released in. This is important to remember because when Simon Fisher Turner and Edmund de Waal created A Quiet Corner In Time they had no idea that it was to be released into a world of shutdowns and pandemics yet here is an album that is vital for these horribly uncertain and anxious times. I have been lucky to have lived with the album for a while now at what at first felt like a stark and and austere work has suddenly blossomed into a warm and comforting listen. In January the album highlighted its sharp ceramic edges with the sounds of broken materials scattering across a surface and the distorted ugliness of static that scrunches through the title track highlighting a sort of methodical destruction. Throw in the chill-fears of Right Side Up Or Upside Down which lurks behind your shoulders falling in to that creepy sync step you find yourself in every now and then with a stranger walking behind you in the dark and you had yourself an album of ambience filtered through a prism of fear and paranoia. Yet….

Here we are in March and suddenly A Quiet Corner In Time has flipped the script. Where once there was a cold chill now there is a warm embrace. As the news rolls on in the background I find myself drawn to the humanity of the piece. The shattered ceramics are now helping me realise there is a human hand there. The horses hoofs, the plane flying overhead and especially the children’s voices that are scattered throughout the album help me connect with a world outside my own four walls. A world that is feeling more and more distant with each passing day. The edges are still there and the music does still hold a heaviness to it but it now serves as comforting tool more than an esoteric work that was wonderful on a critical level but was too intimidating to enjoy repeat listens. Now I am able to bathe in its warm embrace with Fisher Turner’s sounds creating an ambience which is akin to allowing yourself to sit at the bottom of a swimming pool for a while and the odd serenity that that can bring you.

A Quiet Corner In Time is a gorgeous work that will reward the listener with many hours of comfort and pleasure if you allow it to. Embrace its edges and darker aspects and you will see how bright the colours of it truly are.

Edmund de Waal can be found via his website