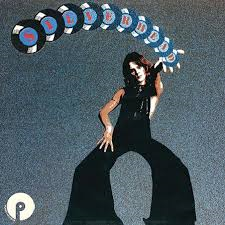 Silverhead /16 and Savaged / Live at the Rainbow London

Reissue programme on Deep Purple’s label (reactivated for this occasion by Cherry Red) of 70s trailblazing Glam/Hard Rockers Silverhead, consisting of the two LPs they released during their existence along with a posthumous live outing issued in Japan only, recorded at the legendary North London venue the Rainbow….Ian Canty checks the party animals invites and makes sure they only get one piece of cake each

Formed in 1971 by ex-public schoolboy and actor Michael Des Barres (he was one of the kids in Sidney Poitier’s class in “To Sir With Love”), Silverhead possessed an exuberant frontman, an image that fitted in perfectly with the incipient Glam Rock scene and musically combined the good time, high energy feel of the Faces with a more urgent 70s version of the Stones. But for one reason or another they never quite made that crossover into commercial success, despite some wild live performances and dynamic recordings. Somehow initially getting backing from living “Spitting Image” puppet Andrew Lloyd Webber and his cricket obsessed pal Tim Rice through Des Barres’ performance in the musical “The Dirtiest Show In Town”, the band’s line up also included Stockport native Nigel Harrison (prior to joining Blondie circa “Parallel Lines”, there’s that classic picture in which Nigel is playing bass and looking on in total horror as Iggy Pop bladed himself on stage at Roddy’s English Disco), guitarists Rod Davies (who played with David Bowie in the 60s) and Stevie Forest, with the band being completed by drummer Pete Thompson.

Though not quite as outlandish as the New York Dolls, they aimed for similar sleazy brand of Rock n Roll all topped off with a whole heap of bad attitude. Des Barres would throw himself into audiences half dressed, not unlike the aforementioned Mr Osterberg, while the band ploughed on at high velocity like the streamlined riff machine they undoubtedly were. Such rapturously received stage performances, as well as the good (or other) press engendered by off-stage shenanigans, saw them signed to Deep Purple’s Purple Records imprint, with them being asked to accompany the label owners on tour into the bargain (during the entire trek Ian Gillan, Purple’s singer of the time, allegedly did not say one word to the support act! Apparently the fact that the female company Purple kept appeared to be keener on Silverhead than the headliners may have had some bearing on it…..).

Soon their self-titled debut album emerged, replete with a Pop Art front cover photo of a hugely-flared Des Barres seemingly impersonating a railway tunnel with his trousers. Though not making the breakthrough the band might have hoped for, this is a pretty accomplished and exciting debut. Occasionally their straightforward fast paced R n B style seemed to anticipate the likes of Eddie and the Hot Rods by four years (on the “Ace Supreme” single and parts of the grandstanding “Rock n Roll Band”, probably the LP’s highlight), but elsewhere they utilise a slide guitar to up the Blues ante on “Long Legged Lisa” (well it was the 70s….), recall the balladry of “Mick N Keef” on “In Your Eyes” and get the old scarves raised up high for the Faces’ style “Wounded Heart”. But on the whole Silverhead’s stock in trade was freewheeling and powerful rock with not the time nor inclination for any instrumental frippery, they just kept the beat coming and the pace fast and fresh, which made for exciting times and indeed listening.

The new reissue of this first album features 3 live cuts (a bit echoey sounding, but the vibrant performances make them worthwhile) and some snappy 7″ versions. Though at the time Silverhead saw themselves lumped in with the Glam Rockers they had more in common with a band like Slade than the more premeditated glitter acts. They wrote all their own material, followed their chosen direction without being ordered about by record companies or producers like studio puppets and built everything they did on their frenetic live shows. All of which may have conspired to count against them, insanely, but those were the times. 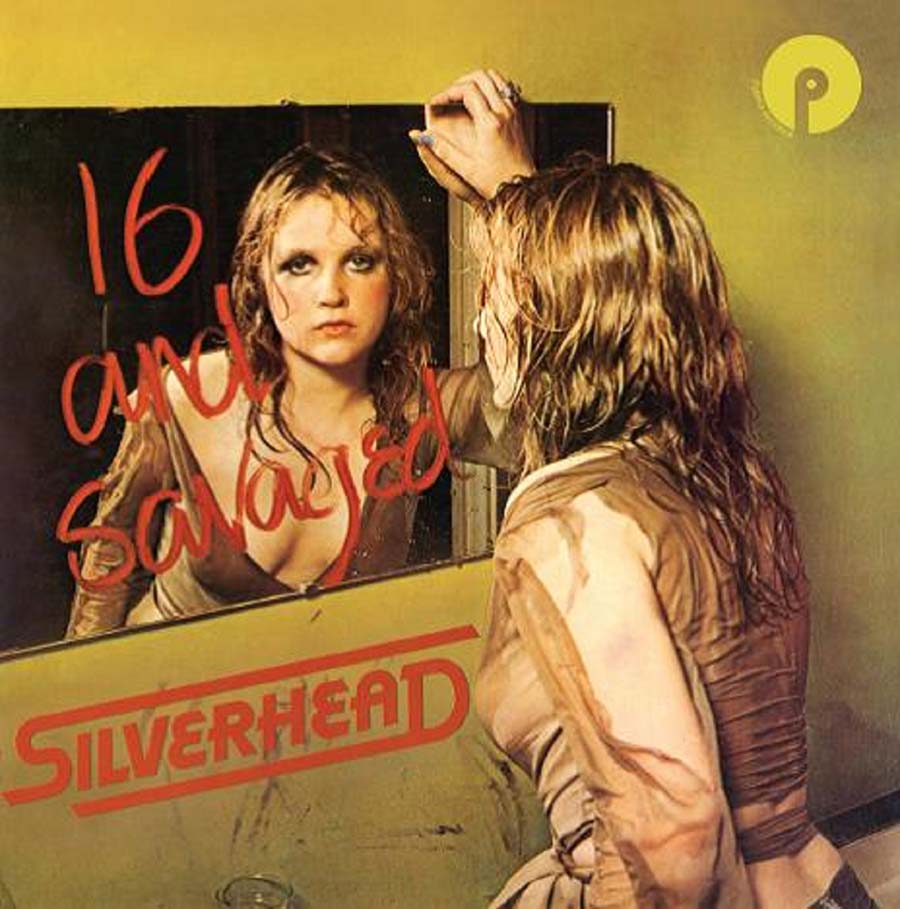 By the time of the follow up “16 And Savaged” personal issues meant that Stevie Forest had dropped out to be replaced by Robbie Blunt (Blunt was virtually pushed into the job by his mate Robert Plant, who would employ him as his guitarist of choice in the 1980s), but Silverhead carried on regardless and this potential setback was hardly noticeable.  The LP title and sleeve photo are as “non-PC” as you could only get away with in 1973, but after observing that let us consider the contents within.

Reading through the notes that accompany this reissue, their second album appears to be the one that the band themselves were most happy with. “16 And Savaged” follows the same formula as the first LP but tightens things up with only one true ballad surrounded by many convincing and loud efforts that skirt Glam and Proto-Punk. “Hello New York” is a great opening track for anyone’s money, with elements of hometown boys the Velvets driving rhythm semi-obscured by a rock solid guitar blitz. Pressing the innuendo button and coming up with the single entendre “More Than Your Mouth Can Hold”, Silverhead again recall Rod and the Faces here and on the ballad “Only You”, which just about steers away from being a bit soppy. But this track may have paved the way for the “Hair Metal” love songs of a decade later even so I’m afraid. Well I think in this case we’ll let them off that unfortunate bi-product because the remainder of this set is spot on.

“Heavy Hammer” gets us back on track though, a neat Funky riff wrapped round a very Steve Marriott vocal, which combined with a strong hook makes it a winner. The slide guitar is back with a vengeance on “Cartoon Princess”, which again dips a toe in the Funk. But the mystery of this disc is why their two salutes to Hollywood legends “James Dean” and “Marilyn” remained unreleased when they were such strong songs: the former is a driving Proto-Punk pounder, the later a little less relentless but still pleasingly tough and more than a tad scandalous! It’s way better than the Des Barres lone efforts which follow, obviously the powers that be saw him as a solo star to fit in somewhere between David Cassidy and Rod Stewart, but the songs presented here while ok weren’t ever going to be strong enough to get him in the charts. Some more rough and ready live performances of LP tracks round off this set.

“16 And Savaged” overall is a stronger album than the debut and should have seen them go onto a decent level of success. It wasn’t to be though and the band soon split up, with Des Barres going back to his acting career and later joined “supergroup” Chequered Past. This reunited him with Nigel Harrison alongside his Blondie compadre, drummer Clem Burke and Pistol Steve Jones. All that was left over after Silverhead split was the “Live At The Rainbow London” LP which was posthumously released two years after they broke up in 1975 and then only in Japan. 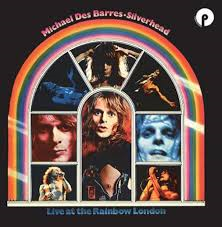 This final offering of this reissue series proves pretty clearly to me at least that Silverhead’s natural environment was in the live situation and they were in their element attacking an audience for all they were worth. It is electric and you can imagine them having the assembled throng in the palm of their hands. With Des Barres as the cocksure ringmaster and his well drilled colleagues supplying the thrills and spills, they must have destroyed all in their path at the Rainbow that night. Joined on this new edition by a BBC In Concert recording from the same year, this makes a powerful statement of their case for being one of the best live attractions at the time…many bands did not want to follow their sets and on this evidence, with good reason. It is probably the best of these three reissues (though they all worth your attention) because of the streamlined vigour and showmanship displayed, it’s infectious. The BBC session in particular is an object lesson in controlled power: the band sound right on the top of their game, being able to go from brutal to gentle and back again at the drop of a hat, whilst Mr De B holds forth effortlessly out front. They were patently masters of their chosen game.

Silverhead may not have been quite the Punk Precursors in comparison to their contemporaries the New York Dolls and Hollywood Brats, but they certainly were a tougher proposition than most of what passed for Rock N Roll in those days and they definitely had their moments in anticipating the aggression and fire of Year Zero if nothing else. All these reissues sound great and are furnished with authoritative sleeve-notes from Malcolm Dome with Des Barres, Harrison and Rod Davies all taking part to give a full picture of the band and the times. Silverhead are all but forgotten these days so it’s high time to reassess their ebullient 70s prime and with these CDs you get the full picture of a great, unheralded band.