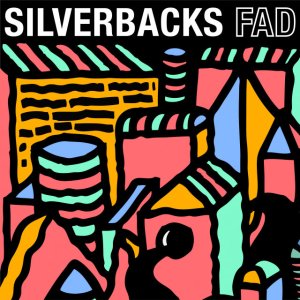 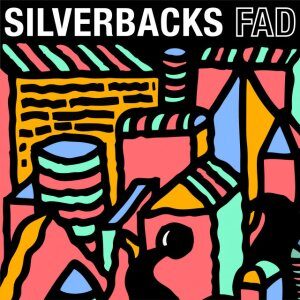 Coming at you from Dublin (via New York and early 80’s Glasgow) is Fad, the debut album from Silverbacks. There is much furore around fellow Dubliners, Fontaines DC. Silverbacks are more than deserving of some of that adulation.

As hinted at in the intro, the band has a varied sound, which has more in common with the likes of The Wants from NYC rather than their aforementioned Dublin counterparts. Featuring an angular discordant guitar sound much loved of the post punk era Glasgow scene – Josef K, Fire Engines et al, with elements of afrobeat thrown in for good measure.

Opening track and earlier single is a case in point. Dunkirk, opening with a throbbing bass and pounding drumbeat, adding those spiky angular guitars, and developing them into fresh afrobeat styled riffing as the tune closes out.

Throughout the album the band take their varied influences and make them their own, blending styles and inspirations to create their own eclectic heady brew. Add to this their sharp witty lyrics revealing their unique view on life.

The track the album takes its title from is an understated, stripped down Pavement-esque understated track. Fad ’95’s pace is set by trippy funky drum rolls with a backdrop of lightly plucked guitars and bass. Quips about politicians in denim hark back to the cringeworthy “Cool Britannia” era of the 90’s.

Talking of cringeworthy and Pavement…ludicrously, the atrocious Sports Team are up for the Mercury prize this year. In some quarters I’ve heard the utterly appalling and highly over-rated formulaic band compared to Pavement (Apologies to Pavement). Silverbacks have more talent and appeal in the off-kilter Fad ’95 than Sports Team have in their entire locker.

The lead vocals are shared with Emma’s silken voice taking the lead on a few tracks. The first of these is the sublime Klub Silberrücken. Up the Nurses follows later in the album and has an atmospheric rise and fall. Emma’s voice takes on a delicate Jane Siberry feel to it at times.

Just in the Band is a lively boisterous romp and is the closest the band gets to the sound of bands like Fontaines DC. Following on from this, such is its DIY indie sound, Grinning at the Lid could be a long-lost track from The Cribs.

Towards the end of the record, Muted Gold is one of the album highlights, funky drumming combined with lush experimental guitar riffs and rhythms borrowed from their love of African guitar sounds it is a triumph.

Penultimate track, Madra Uisce is one of the few little instrumentals scattered throughout Fad, at not much over a minute, it is the longest of the three intermission type tracks, but the addictive rhythm deserves longer. One for the road? Last Orders signals the end of the album. The jaunty taut post punk leanings nod towards Talking Heads and their ilk before fading to close as the last of the punters are kicked out into the night.

Silverbacks are definitely more than a fad, their fellow Dublin counterparts may be lauding a Hero’s Death on their new long-player, Silverbacks are deserving of a hero’s welcome for this richly lush and engaging listen.