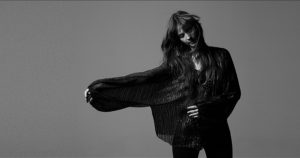 Silver Rose is the alter ego of Mexico born songstress Carla Sariñana. The Silver Rose project originated in Los Angeles in the spring and summer months of 2015. Inspired by shoegaze of the 90s and the iconography of the 1970s, Carla set to work rendering her unique take on these influences through the moniker Silver Rose. Carla had been playing bass and writing songs for successful all-female Mexican rock band Ruido Rosa since 2005 and they grew a loyal fanbase through their raw and energetic live shows. Basically, Carla has been cultivating and honing her skills for years now and is no way green behind the ears!

The EP was recorded at Panoram Studios in Mexico City from late 2015 into March this year, it includes session work from Edward Patrick on drums, Cesar Saez, and Javier Blake from Mexican punk pop band División Minúscula. All of the songs were written by Carla Sariñana except for ‘Where I Left My Heart’ which was written in collaboration with Cesar Saez. Essentially a bilingual project, it’s a record of two halves: English and Spanish, both cohesively tied together with Carla’s enchanting ear for dreamy melodies.

Seemingly drenched with the shoegaze and noise influences of 90s acts such as Mazzy Star, Lush, My Bloody Valentine and JAMC, Carla’s new material as Silver Rose was refined in live performance in various bars around Los Angeles and in Mexico City. With Ruido Rosa, she has played the Harvard and Stone, SXSW, ViveLatino, and supported KISS (!!), Maroon 5 and Queens of the Stone Age. Her song writing and influences feels very grounded and down to earth. She very much wears her influences on her sleeve and isn’t afraid to just make a beautiful melodic noise.

So lead track ‘Take me home’ begins with lovely feedback which soon erupts into a big throbbing insistent beat that has layers upon layers of shimmering guitar noise. The pounding chord progression immediately reminds one of Bowie’s ‘Heroes’ which is actually a really nice thing. I’m not sure if it was deliberate, but either way it is a welcome appropriation! Again, the vocal’s remind one of Lush, Mazzy Star, Slowdive, etc, but it’s the layers of melodic noise and the ethereal vocals that lie gently on top that absolutely make this track.

I have always attested that there is a beauty (and dignity) in noise and Silver Rose is testament to that. It’s lovely stuff and I for one am looking forward to hearing more from Silver Rose.