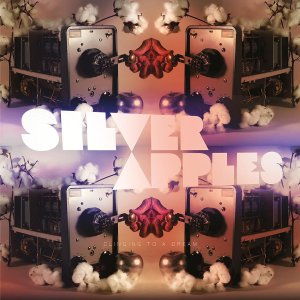 Silver Apples: Clinging To A Dream

Seminal electronic outfit Silver Apples return with their first album in nineteen years. With only founding member Simeon Coxe remaining from the original band, Simon Tucker discovers a band struggling to reach the heights of their past.

Silver Apples place in the league of influential artists is secured. Their early output from 1967 is rightly revered as they managed to foresee the oncoming revolution in German pop and helped birth electronic music as we know it. The question is, is it fair to hold such a respected band up against their previous works? Are we expecting too much when we wish for more innovation and more ground being broken? Some times we can allow an artist a period where they are not as revolutionary as their younger selves. It happens to the best of them. What can’t really be forgiven is when an artist not only doesn’t come close to their past works but actually goes backwards and turns into pastiche. Unfortunately, this is what Simeon Coxe has done here. Without the aide of founding member Dan Taylor (who sadly passed away in 2005) whose drumming was an integral part in what defined their sound, Coxe has delivered an album that is so entrenched in the past you feel it should come with free joss sticks and far out clothing.

The first four songs on the album are pop-lite and “groovy”. They are childlike in nature much like Frank Sidebottom songs. Colours is the worst of the offenders as it covers a really straight-forward pop song in wig-out electronics. It’s almost comedic in it’s desire to be “out there” and instead of psychedelic it is shambolic playing out like a modern art segment of Spaced (“it’s not finished….it’s finished”).

Things slightly improve with the atmospheric spoken word piece The Mist which introduces textures and an eeriness which is much needed. The Mist is akin to the work of John Carpenter and is a welcome reprieve from what has proceeded it.

Susie continues the high-quality with its driving and skipping alt-pop sensibilities. Unfortunately the quality soon disappears as we return to weird by numbers with songs such as Drifting (more like treading water) and Concerto For Monkey And Oscillator (honestly there is not much you can write about this) bringing you back to the land of Middle Earth.

Clinging To A Dream is a hard album to like. Everything seems forced or a desperate attempt to catch old stars. Luckily, this album will never take away from the bands previous achievements and they will always be rightly regarded as pioneers….just don’t go looking for adventure here.