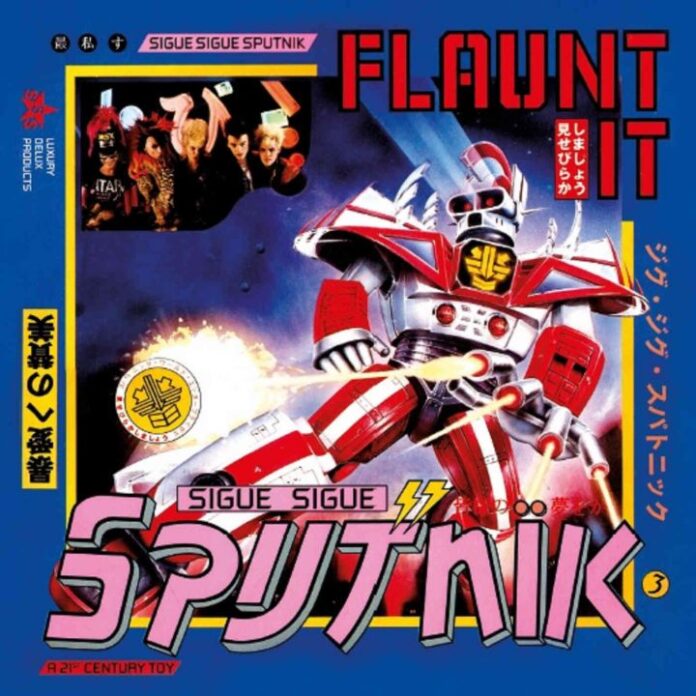 When the unfulfilled potential of Generation X’s second line up floundered in 1981, Billy Idol decamped to the United States to aggressively pursue a mainstream career in the simplistic pop/rock stakes. Co-founder Tony James, initially part of the Idol US package, was left high and dry by Billy’s new management. For a few years James busied himself in production and briefly featured in punk supergroup Lords Of the New Church. Other than that, he looked to transpose the ideas that came through the London punk scene onto modern technology. A lot of the crucial input for this came from his then girlfriend Magenta Devine. She took on the role as publicist for the project, helping develop the ideas across the media.

James slowly began to gather band members, starting with guitarist Neal X. Then came the recruitment of poser/apprentice singer Martin Degville and access to his shop YAYA was a quantum leap, a base for operations akin to the Sex Pistols and the Kings Road Sex shop. Tony took on people for how they looked and their attitude rather than any prior musical experience, with drummer Ray Mayhew being the next to pass the style trial.

The nameless, now four piece act made their live debut supported New Model Army. They played a variety of covers from 50s rock and roll classics, songs culled from the Stones’ songbook and the New York Dolls’ Personality Crisis. With extra drummer Chris Kavanagh joining up, the group were christened Sigue Sigue Sputnik after a Russian street gang named in a press piece that caught their eye. They obtained hi-tech gear via Mick Jones of the Clash, a good friend of James for years and by all accounts a massive helper and encourager of Sputnik in their formative days.

Sputnik then set about pulling together a coordinated image and to write their own songs, something that had so far proved illusive. They based themselves at a building in Harrow Road and worked hard on their craft. It has to be said they never really conquered that problem of writing songs per se – as the hype took over, they found a more fragmented solution to fill their records with and that became enough. Despite the fact that most of their tunes were a really variation on the Shoot It Up (the original title of Love Missile F1-11) theme, they managed to cram in enough entertaining samples, novel noises and slogans to cover the lack of any coherent song. Turning a possible negative into a big positive, they subsequently came across as fresh and edgy, both of which qualities were sorely need in UK pop at the time.

A big part of their sound was their professed key influence Suicide, the NY electro punk duo that had been cutting new ground since the early 1970s. Suicide’s music underpinned everything Sputnik did on Flaunt It and the associated singles. Mixing raw attitude and chaos with primitive synths, Alan Vega and Martin Rev often flummoxed audiences to the point where they were bottled off stage (something echoed by SSS when Degville was glassed at a gig later). Unlike the post-punk synth crowd, both Suicide and Sputnik were rock & rollers at heart. This gave Sputnik an edge into a different audience than just synthpop fans.

Through Devine Sputnik had good access to press, radio and TV. By putting together a multi-media blitz including their own highly controversial video demo tape, they managed to set off a bidding war among the major record companies. They were now “hot stuff”. EMI, at the time trying to shrug off the reputation as fuddy duddies after the Pistols shambles a decade before, stumped up the cash to sign Sputnik. The fee was however substantially less than the £4 million that James later claimed.

Love Missile F1-11 was their first single and an instant success. It helped that they managed to get the great Giorgio Moroder to produce the record and the attendant hype was enough to see it rise to number 3 in the UK charts. Sensationalistic tabloid coverage of the band followed, but just as they were getting front page headlines, the music scribes were sharpening their knives for them. The weaknesses of the project were sitting ducks for the “typewriter gods”, who went to town on what they saw as “rebels without a clue”. Which meant by the time Flaunt It reached the shops, Sigue Sigue Sputnik were seen by the trend conscious as a bit naff, which was exactly the opposite of what they intended.

Listening to the album in retrospect, I had to admire the band’s ambition and the skilful use of smoke and mirrors to present something that is still fun to listen to today. The big wheeze for the original LP was to sell advertising space between the tracks. Ultimately Sputnik couldn’t find enough takers and had to fill the empty spaces with adverts for their own corporation, their computer game (which didn’t actually exist) and one for EMI done by the band (nb these are the only three advertisements present on the reissue). Which felt a bit duff, given their grandiose press statements and pretentions to high finance.

Away from those concerns, the album versions of the singles are pretty good, with Love Missile F1-11 still sounding suitably sparky. Atari Baby refits Suicide’s Dream Baby Dream effectively and some hammering synths mark their real Vega/Rev homage Rockit Miss USA. Teenage Thunder is neat electro glam and has the line “no more heroes, no more fun” which sums the band’s outlook up in one neat couplet. Massive Retaliation includes hip hop rhythms and She’s My Man mixes dance beats and rock & roll very well. It’s the direction the band had to pursue to survive really. Overall I found Flaunt It an interesting period piece, it’s full of energy and invention. Also, the cool glammy guitar interjections from Neal X are always pleasing to hear.

Fitting in perfectly with James’ Malcolm McLaren tendencies at the time, bonus track on this first disc From The Gutter To The Stars is essentially Sputnik’s Some Product..Carri On Sex Pistols. It’s a similar mixture of radio and TV snippets, samples and interviews, plus that gruff voiceover man spouting their mantra with various bits of music providing the backdrop. This item reaches its zenith when some bozo of a DJ scratches and snaps one of their records live on air and Tony announces that the band want eventually to purchase EMI, an amusing idea that reversed the usual “musician selling their soul to the man” notion.

Discs two and three of this set gives us various remixes, b sides and rare tracks. Of the seven mixes of Love Missile F1-11 that feature on the second disc, I enjoyed the West Bam Remix Short Version the most. This take nicely slows the rhythm down, but remains very dance-orientated. The Magic Flute mix of Sex Bomb Boogie is a lot of fun too. Disc three has an early take of their 1989 single Dancerama and the slow glide and buried vocal of rare offering Suicide, caught live in Sept 1986. The basic feel and vibe of Buy EMI and another mix of She’s My Man end this disc, which is really one for the more devoted fans.

Talking of which, the final disc which documents a 1985 live show at Abbey Road, will be a positive boon for Sputnik spotters. The bum notes are left in, but there’s great vim and one gets a taste of how good they were live, plus a real sense of occasion. Starting appropriately with electronic explosions on Sex Bomb Boogie, this also features a deconstructed version of Twist And Shout and the pure rock & roll thrill of Jayne Mansfield. Degville’s vocals are bit rough (he did improve by the time of the album proper) and you can see the links to the New York Dolls a tad clearer. With samples dropped in on Shoot It Up, Sigue Sigue Sputnik do sound like genuine contenders here.

However nothing dates quicker than technology and novelty was barely keeping the band afloat after Flaunt It dropped out of the charts. Also the problem with outrageous hype is you cannot possibly hope to live up to it. Clad in outlandish, ludicrous spaceman rock & roll outfits, their computers played up sometimes and muted their live impact, which had the effect of making them just appear more like an updated glam rock thing than anything else. Which is ok, but hardly “the future” of rock & roll that their publicity trumpeted. Soon the tabloids had the Beastie Boys to play with, so they were no longer interested and Sputnik, despite later recordings with the pop production heavyweights Stock, Aitken and Waterman, never really regained their early swagger.

Despite all this Sputnik were definitely flash and fun, if you didn’t inspect the detail too closely. In that sense they were a natural successor to Generation X really, but far more skewed to style over substance. For a brief moment Sigue Sigue Sputnik managed to thrust Suicide’s hypnotic electro beats into the limelight, plus combining cutting edge technology, daft costumes, glam guitar figures and old fashioned rock & roll mayhem into one natty package. Definitely surface with very little depth, even so Flaunt It manages to catch the band before the weaknesses of the project became too apparent and is a very enjoyable curio, even if the years between have rendered it far away from their original intent.