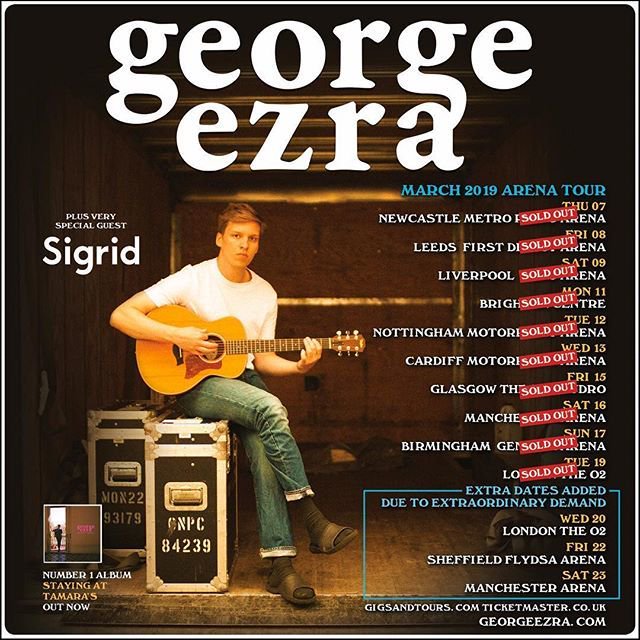 Back to end the tour in Manchester after being here a week ago – another date added…unprecedented demand, etc. Ladies and gentlemen…..

Now, Louder Than War might have its fingers deeply  embedded into the cutting edge, but we do like to keep our eye on what’s happening all over the musical world. What are the kids getting down to if not the frantic idealism and challenge of Idles and The Blinders.  So here was the  chance to see what’s happening in the mainstream and broaden the musical palette and awareness. Not so much get down with the kids but with some mums and dads giving their offspring a taste of live music – and if nothing else, good for them in getting a foot in the door by supporting live music.

It’s good to go out of the comfort zone. It’s a place where I find out that George has a new album out called, (on close inspection, as my original skim read suggested it was something about tomatoes),  Staying At Tamara’s, but more on that later.

First up was bright young (Norwegian) starlet Sigrid and her band. Hoping to follow the increasingly long line of artists and winners in the fame game who are known by one name. It served as both  a taster and also marketing opportunity  as Sigrid is due to go out out on her own headline tour – she’s already sold out one date at Manchester Academy with another one added (due to the usual unprecedented  demand) so warming up George’s crowd won’t have done ticket sales any harm. There’s method in the madness.

Hopping round in her Converse hi-tops and simple t shirt/jeans combo, whether or not she’ll progress to glittery leotards and choreographed set pices, you’d doubt. She just seems much simpler than that. A more intimate Dynamite that just made it above the crowd chatter but her set proved the  sort of inoffensive Europop that gets its showcase on the annual Eurovision extravaganza – one that George later admitted to needing a bottle of rum (bought from a stranger in Sweden) to get through.  Went down well though and maybe many will be back at the Academy dates in November.

So to Mr Ezra. Revved up by some well thought out music over the PA – Queen’s Don’s Stop Me Now and Van the man’s Brown Eyed Girl both getting healthy and hearty audience participation, but the ace was played with a roof lifting Don’t Look Back In Anger.  Manchester was ready to party on with George and after allowing his seven piece band to get into place on he strode; a self-assured and confident presence.

Clearly the focal point, stood at the lip of the stage on his round carpet, the band in formation in the ranks, he’s not what you’d call the most  cutting edge of  figures with his sensible haircut and shoes; smart black short tucked into his pants, but he has the packed literally to the rafters crowd in his hands.  A shit hot band (and you can’t beat a bit of brass to add some oomph to the sound) and some cool grooves, his easy style might remind those new to him of  Peaky Blinders’ Alfie Solomons but without the foul mouth,  although he did say ‘fuck’ a few times. Hopefully it didn’t penetrate the earmuffs of the youngsters in the room.

Punctuated by references to and stories of his songwriting travels – hence Barcelona, Budapest and the aforementioned Tamara who provided the hospitality for his latest songwriting retreat –  he was aided and abetted by a thoughtful and attractive production. Based round a backdrop of  three big arched windows and some lampshades to create a ‘George in his living room’ feel (a bit like the Deaf Institute but on a massive scale), it was half  an hour in before  Saviour and Did You Hear The Rain offered up something a bit different from the shiny happy persona. The former a big widescreen country/American sketch, the latter, an impressive  clattering  of darkness. Not songs to dance, singalong and  wave your arms to, but adding a little more musical depth to proceedings. But for those who wanted to dance, singalong and wave their arms, he has two albums full of those songs.  They were even singing Shotgun on the tram home. Nice to see how the other half live.