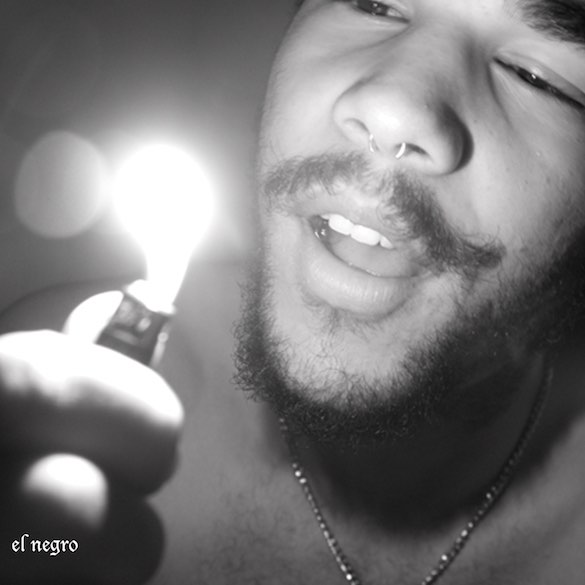 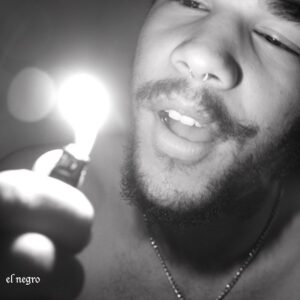 Virtuoso rapper and multi-instrumentalist, Signor Benedick The Moor, whose video we premiered a couple of months ago, recently re-released his first album. Simon Tucker reviews.

This review has been a while in the making as I have tried to make sense of the album. I’ve had to try and work out if my initial feelings towards it would remain after repeated listens. Would I be disappointed third / fourth / fifth time round? Would I suddenly notice a duff lyric or poor production touch? Would I get bored of it? Well, as you’ve probably guessed, the answer to all these questions is a resounding NO!

Signor Benedick the Moor has created an album that is cinematic in scope yet personal in feel. It’s rich, dense, political, introspective, humorous, and profound.

Musically, El Negro refuses to sit still and be pigeonholed. It takes you into its world, letting you believe you are heading one way before a disorientating switch in direction leaves you disorientated yet ecstatic. Signor leads you down the rabbit hole into his warped yet magical Wonderland, always encouraging you to peep around corners and explore paths that fill you with a mixture of trepidation and excitement.

Take Call of the Wild, a song that hangs itself on the basic frame of eighties synth-pop with New Order-like bass lines and precise and strategic guitar notes. The opening few minutes of Wild are more emotive and progressive than any so-called Indie band currently working at the moment. Forget the recent hype of a certain four-piece from Leicester, this is the real sound of the future of rock ‘n’ roll. As the song progresses, it slowly morphs into a thrash drum & bass number spinning the head and stomach forcing you to fight to hang on until the end. A master class in song structure and this is not even the best song on the album.

As mentioned before, El Negro is incredibly cinematic. It is 3D cinema widescreen in its scope and ambition and there are obvious film references in the sounds and textures within. One minute the listener is in the world of Harryhausen, all sword, sandals, and mythical creatures (All Revere (Le Narrater), the next you are transported to eighties / nineties schlock horror (Mouth of the Beast) which is both skin-crawler and nervous laughter. Then you are transported to a gritty drama (Black Blood Avenue) which keeps applying pressure before giving sweet slight moments of relief.

Signor always lets the songs take their natural course, never forcing them to end unnaturally, each one ending exactly when they should, never outstaying their welcome.

Lyrically, El Negro is sheer brilliance. Never falling into cliché, Signor displays an extreme intelligence, contemplating religion, modern philosophy, and modern day slavery (this is all just on the staggeringly brilliant Existential Humanitarianism as a Fashion Choice). Other references include the introspective psychoanalysis (.//End) which, with its primal scream therapy inducing delivery, is a tense yet beautiful song, and Looney Tunes (a cheeky nod to Elma Fudd appears in Black Blood Avenue).

On the bonus track version of El Negro we are also treated to the glorious h8 Everybody (Enter The Black Prince) which is pure British Goth-Pop and includes lyrics which tell the story of a man who’s imaginary friend and confident happens to be Siouxsie Sioux.

El Negro is  is another leap forward sonically and lyrically in Hip-Hop following in the illustrious shoes of Fear of A Black Planet, The 36 Chambers, and Operation Doomsday.

Oh, and this was all created by a twenty-year old.

An outstanding debut album and one that will certainly stand the test of time.

You can find Signor Benedick the Moor on Bandcamp (where you will also find El Negro), Soundcloud, Twitter, and Facebook.