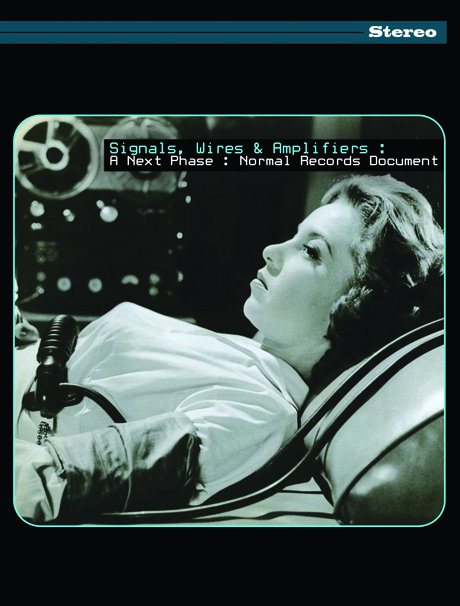 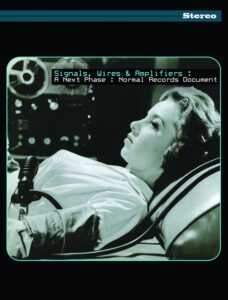 Signals, Wires & Amplifiers is an exquisite 20 track CD compilation featuring artists with from the Next Phase: Normal records label. The 20 tracks come from 10 bands on the labels roster, 11 of the tracks are exclusive to this compilation.

Next Phase: Normal Records first came to my attention when I received a 7” split single from Sissy Space Echo and the Invisible Collaborators/Edible Eyes for review on this site (read it here). What caught my attention as much as the music (both tracks feature on this compilation) was the wonderful attention to detail on the release.  From the personalised hand-written letter that came with the promo (no impersonal mass-produced press release for this lot). The retro sleeve imagery, and the attention to detail in the packaging. The sum of its parts was (is) worth so much more than the modern way (how old am i?) of streaming and instant gratification.

Anyway, this compilation brings together ten bands on the labels roster namely; The Razerbills, The Edible Eyes, Girl One and the Grease Guns, Horton Parks, The Science of Words, a.me, Sissy Space Echo and the Invisible Collaborators, mattrobson, Auto Queens & Deathtrippers. The roster of bands revealing a variety of musical styles and influences, but sitting together perfectly on this compilation. Its as if they were made for each other, a futuristic space/sci-fi theme running through several the tracks. The variety on offer should ensure there is something here to appeal to all. The compilation gives a taste of what the label is about, encouraging the listener to investigate these bands further.

Before I listened to the tunes, I was once again struck by the packaging. A DVD sized case with artwork by Jon Aldersea/Goldphone Creative Media, you would be forgiven for thinking you had received an old black and white horror B-movie. The Alligator People starring Beverley Garland to be precise (the star of the front and back covers). The imagery is in keeping with other releases on the label from the likes of Girl One and the Grease Guns. Inside, the attention to detail continues with 5 cards, each with a side dedicated to one of the bands on the label’s roster.

So, what of the music? Strangely, although there is a vast array of styles on show, they all somehow feel eerily connected and most definitely in tune with the artwork that has obviously been carefully chosen to reflect the mood of the music. The aesthetics here are more than just a cover, this is why physical music is more important to the likes of music fan like me than streaming or downloading will ever be.

The album kicks off with the first of two tunes from The Razerbills, Space Tornado is exclusive to this release and is suitably monikered. The mysterious masked fez wearing band offering up a whirlwind of interstellar surf rock. Their second contribution (Don’t Look) In The Eyes continues in a similar vein, developing the B-movie them in my head with a sinister mid-section and closing.

The Edible Eyes provide the electro synth pop of You’re Void, a warning to us all as we hurtle headlong into an uncertain future. The combination of atmospheric keys combined with contemplative vocals at the same time sound futuristic while recalling 80s bands like The Human League.

Girl One & the Grease Guns

Girl One and the Grease Guns provide three tracks on the compilation. The driving Suicide like rhythm of Telegraph Street radiates an electrical energy, crackling and humming threatening to explode at any time. For their other contributions Sign on the Dotted Line sounds like a 21st century take on early Depeche Mode synthesiser pop while their third track continues in the vein of early 80’s synth pop but this time the overlying feel is more of a New Order type vibe.

They are the band who Sissy Space Echo & the Invisible Collaborators rose from the ashes of. They also contribute 3 tracks here. The first of which, At 7.44, with its 1960s pop sensibilities wouldn’t have sounded out of place alongside some alt pop bands of the 80s, The Flatmates and their ilk. The Butterfly (Fills the Frame) channels the louche laidback 60’s feel of Nico era Velvet Underground while Sissy Space Echo close the album with The World Still Turns, an atmospheric vocal backed with an uncomplicated but sophisticated sorrowful melody

Horton Parks offer a different pace and style with the first of their tracks. Their forlorn I Can See, a lamenting acoustic guitar accompanying a vocal which at its deepest baritone moments resembles Beat Happening’s Calvin Johnson. Their other contribution, Rosehearty Doggers is an altogether more robust affair, full electric band, vigorous full on foot to the floor driving guitars. I need to be careful how I word this. It reminded me of childhood holidays, when we visited Rosehearty beach on the North East coast of Scotland. I don’t remember any doggers though – oh, and don’t look up the song title on google, especially if you’re at work…

The Science of Words storm the place with their glorious take on surf-punk with their first track here In a Space. Their second tune, Regeneration (Phase 2) crunches into life. It adds plaintive surf guitar and elegiac vocal before layering the remaining instruments into an elegant clamour. Blissful.

a.me provide the first of their two tracks with Waitland. A vocal has an ethereal like quality. While the band have a dream-like quality and sound nothing like The Clash, the persistent rhythm recalls Straight to Hell. Plus D’un has an eccentric off the wall rhythm running throughout with its harpsichord backing. A kind of mediaeval St Etienne if you like

mattrobsoon pacify with their soothing brooding atmospheric electronic soundscape Are We Always Like This? Their second instrumental offering the more upbeat trippy experimental Baraitster’s Shame.

Electro goth funk anyone? Shadow Girl (Hit the Floor) from Auto Queens seeps into your psyche with its dark electro beats. Then out of nowhere a funky guitar line appears along with a driving rhythm and addictive drumbeat. The second of their tracks here is the sample laden almost industrial like driving beats of the darkly topical The Terminal Zone, complete with distorted/megaphone style vocal.

With a name like Deathtrippers, you couldn’t expect anything other than gothic majesty. This time in the vein of the first wave of goth, combining Sisters style guitars with Pete Murphy-esque vocals. The sweeping shadowy guitars swirling and enveloping you in their darkness. As the song develops layering its textures, it becomes almost A Forest era Cure-like, the abrupt ending securing that thought.

If this is the only release from Next Phase : Normal records you buy, it is worth splashing out on. I’d like to think though, if this is your first exposure to the label, you’ve dipped your toe in and the water feels good? Now is the time to dive right in and explore the pool of talent the label has to offer.