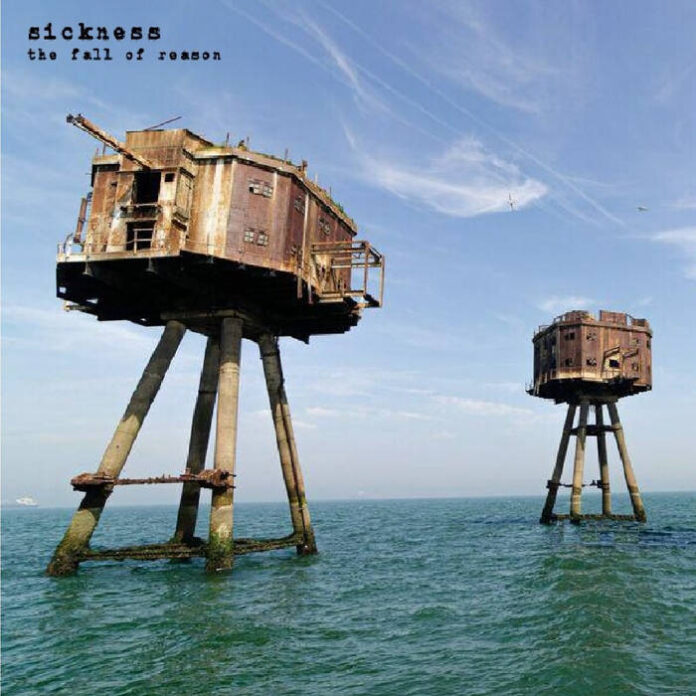 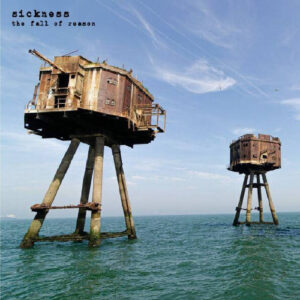 Sickness – The Fall Of Reason

The latest release from Sickness uses pounding rhythms and intricate guitar work to reflect on the darkness of reality says Nathan Brown.

There are 5 tracks on The Fall Of Reason which has been released as an EP, but I would argue this is definitely a Long Player. There are plenty of albums out there that are shorter than its 29 minutes. E.g. DOA’s seminal Hardcore 81 (recently given a 40th anniversary reboot) originally came in at under 20 minutes and OFF!’s self titled album was under 16! If it were pressed on vinyl it would need to be on 12 inches. I’ve seen a source claiming an album should be 35 minutes or more than 7 songs. They can go to hell. This FEELS like an album! And it passes the “lasts longer than a pint mug of hot tea” test.

The Fall Of Reason is a continuation from the Loss Decay and Insanity album, and Nick’s work with Sanction This. Rhythmic pounding drums and driving bass lines that make the floor shake provide a foundation for delivery of intricate or screeching guitar work and oft demonic sounding vocals. Songs that come screaming at you or build in intensity. There is a section in the middle of Atrocity that is so chaotic it sounds like you’ve stumbled into a medieval battle. The heavy Killing Joke influence on the sound is still evident. The ghosts of Rudimentary Peni, Amebix and Zygote loom from the shadows. (In a post modern twist the song Holy Nimbus contains the line “Blinko’s black cloud smothers his brain”).

However, Sickness has its own sound. Nick’s sometimes rambling vocal style with his North East accent is individual in character. This is no carbon copy of bands that went before, despite any formative influence. Part of the Sickness experience is experimentation with sounds generated by guitar or grabbed from the outside world. They are ripped apart and put back together again to build a new sonic landscape.

One other characteristic of Sickness is the dark undertones that occupy the lyrics. Themes of religion, war, society’s ills and deeper stuff about the way our minds work… they reflect a dark reality. The “horror, screaming horror” as Nick screams in What is the future? “Have we got what we want? Have we got what we need? Or is it simply greed? Gas is escaping from an old woman’s fire. Dead for fucking weeks. And no cunt enquired”. In The Fall Of Reason “The realisation that those aren’t birds overhead but bombers sent to blast our children in their beds” could apply to so many situations in the last one hundred years. A reflection on humanity: “We’ve gone too far and I don’t recognise where I am”. The delivery of these words can at times be a diatribe, while at others builds anguish or torment into anger – catharsis and reflection or just exasperation.

Listen to Atrocity by Sickness

The Fall Of Reason is the epitome of DIY punk rock and culture over commerce. The whole thing was written, performed and recorded by one person. And he’s done a fine job too. The limited edition of 100 hand numbered CDs were professionally duplicated but the covers and intricate lyric booklet were hand assembled. A couple of Maunsell forts stand like alien invaders or malignant sentinels on the front cover . Rather than spew “limited edition” all over social media to cash in, Nick has quietly released these shiny carrier pigeons carrying a message to people he has built personal connections with in the punk scene over the years. He hasn’t asked for a penny.

For those who missed out on the CD, the album (yes, it’s a feckin’ album) is available to download on bandcamp on a Pay As You Feel basis. The music and the message matters more than the money to oor Nicky.

The write up on bandcamp includes a detailed declaration of all the equipment and some of the technique involved in production, down to the guitar pick up. Drums were not just programmed from preparatory software but built from individual samples. This would account for why they don’t have the robotic sound programmed beats all too often suffer from. There are only a couple of occasions on this release when you could tell the drums aren’t a live drummer, and that’s if you’re actively seeking them out.  You’ll just as likely not notice at all.

You can download The Fall Of Reason from bandcamp and support Nick’s further endeavours.