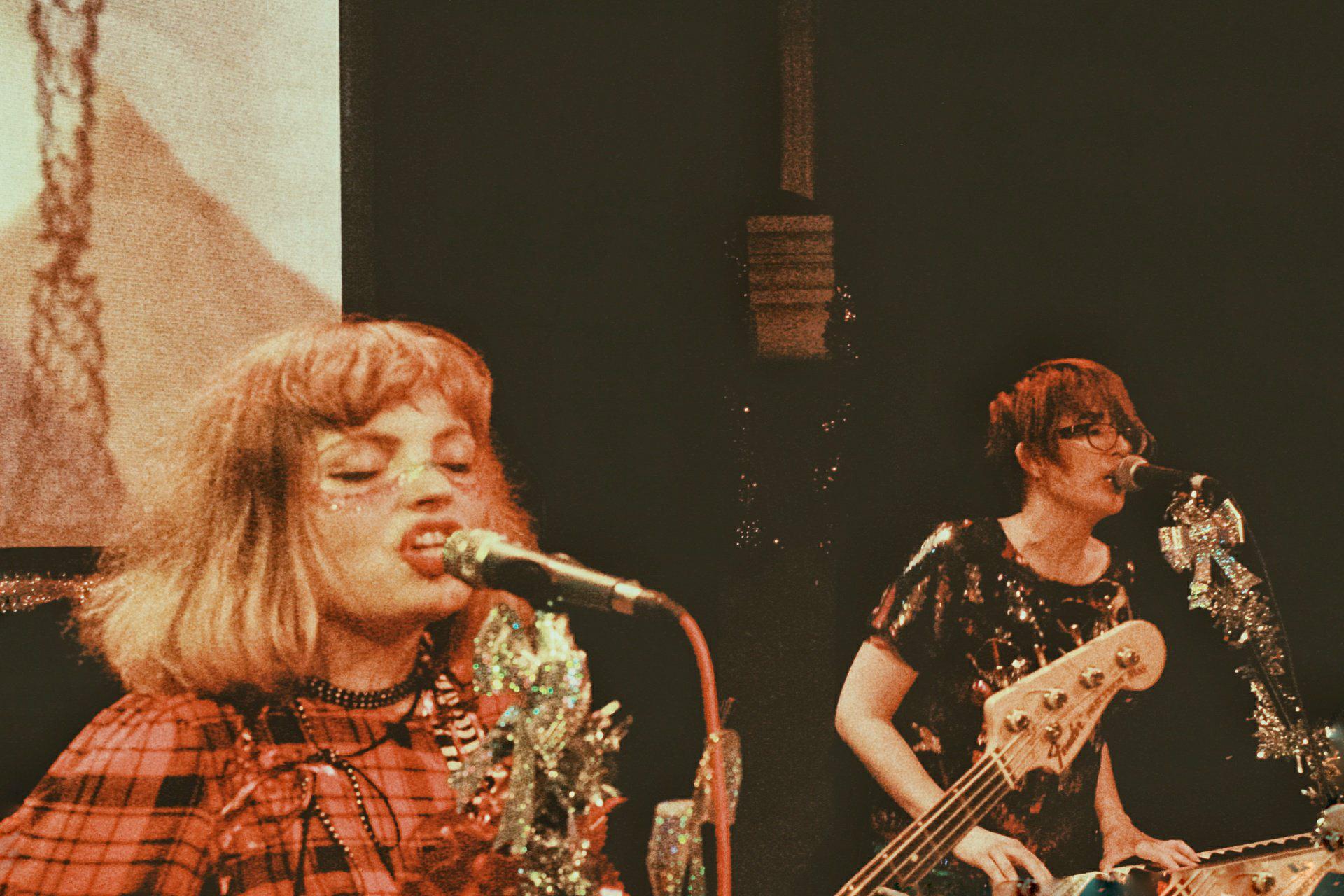 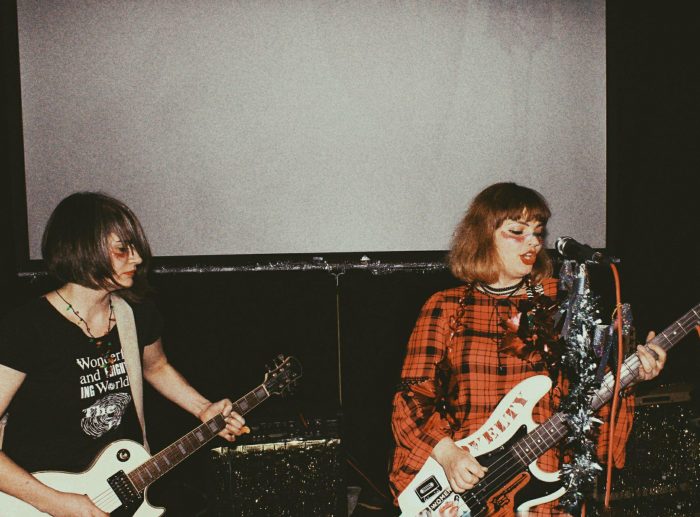 Being ILL at Christmas can be marvellous. Well, if you are the four-piece Manchester band of wonderful, wonky tunes it is, says Louder Than War’s Emily Oldfield…

Perhaps it was because it was the ILL album preview night, or perhaps the gutsy, grungy set from London band Nun Habit and the blistering DJ tunes from Deb Jump and Pink Kink – either way, the ‘Very Sickmas’ event at the Kings Arms Salford, has left me feeling fabulously feverish.

I’ve been itching to write about it. In an age where so much entertainment, even music, is available at the swipe of a screen, a constant barrage of information – it seems people are rarely attuned to actually focusing on anything. However, the ‘Very Sickmas’ gig was proof of the hypnotic, haunting qualities of music which had the crowd hooked and hungry for more.

With the first 30 in the door of this brilliant Salford boozer being awarded a ‘free shot of man tears’ – this was set to be a night of feisty expression, purging out any restrictive notions of gender and power, throwing up a funky beat… inviting all in for a massive musical mash-up.

First up were Nun Habit, a five-piece from London bringing garage-dredged guitar pop to the stage. They sing of the likes of ‘unexpected item in bagging area’, belt out tunes about the dickishness of cheaters, top gutsy guitar with both male and female vocals. Hints of aggression underneath. Proof that lo-fi can still stimulate a room full of energy and send out a brilliant medley of guitar and rhythms which hooks the crowd in seconds.

And if that wasn’t enough to have us in a sweat, then the set from all-woman, Manchester icons ILL certainly was. We were ready to witness the Illness, as the four-piece took to the stage, decorated in glitter. Consider it two fingers in the face of flacid festivities and an eff-off to Christmas… ILL were determined for this night to be a rehash of their original Halloween event earlier this year – and now an occasion for a fantastic album preview too.

The sound of disco was sloshed into psych-pop and pulsed through with keys as they pounded the stage. The wonky wonder of ‘Space Dick’ had an ideal anthemic quality early on, fuelling up the crowd to shout out against the stereo 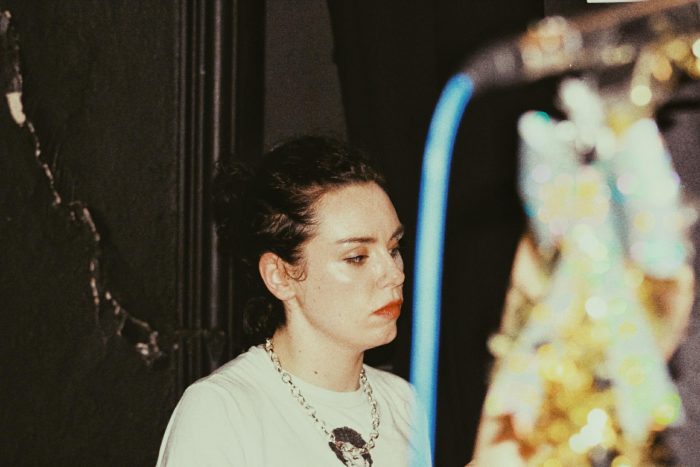 It was an incensing set, with lighting and sound from John Tatlock which added to the spiralling intensity. Thanks to Harri Shanahan’s lingering, long-drawn lashings out at the keyboard and frenzied bursts of vocals, combined with Whitney Bluzma’s gusty bass and voice soaring almost to a yodel – there was something certainly hypnotic going on.

Giving gravitas and sending the music right through to strike in the guts was Fiona Ledgard thundering on the drums – providing a cacophony of creativity for tracks like ‘Ill Song’ especially – and Tamsin Middleton’s raw, resonant guitar playing opening up wonder, weight and the wounds behind the tunes. ILL tell us about the sickness of society, how some things can seem surreal… when they are an irritating reality.

Sexism, prejudice, power-trips – all expanded-on and shamed. Eerie video loops in the background added to this, with great effect.
In an utterly propelling progression of tracks we heard new material including ‘Bears’ which blistered in its unfurling of folklore and dredges of dark guitar; along with some of the best vocal blends I have heard seeing ILL live. Classic track ‘Power’ had the crowd pulsing and ‘Lizards’ lingered with its sinister, stalking bassline and billowing lines of ‘they’re coming for you’.

Another highlight was watching the drummer joined by another… as Fiona Ledgard was accompanied by added beats from Kate Themen, with added thunder through the hard-hitting ‘Drunk Fight’ in particular – a track which saw Harri wade into the crowd, crushing Whitney to the floor with feistily-thrown vocals. Yet the visual spectacular is never gimmicky – it brings in elements of the grotesque with gripping artistry.

ILL also manage to mould a drawn-out, drone-kind of quality into their work which adds to the hypnotic effect – and yet also maintain a tight set which moves the audience in a momentum which certainly isn’t melancholy, instead seriously inspired. A gig which gave and grew the energy in the room, spreading the kind of illness you certainly should want to catch this Christmas.

Keeping it infectious after such an intense set was DJ Deb Jump, spinning out a blend of feisty, feel-good tunes amplified with old-school favourites and then a DJ set from Liverpool based party punks Pink Kink.

A massive bellyful of blistering tunes and even more dancing? No wonder I feel ILL. In the best possible way.

Photography of ILL – with thanks to Zarina Akhtar 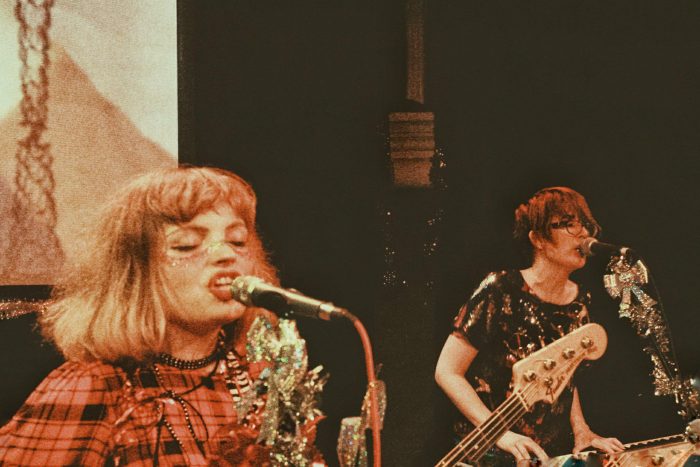