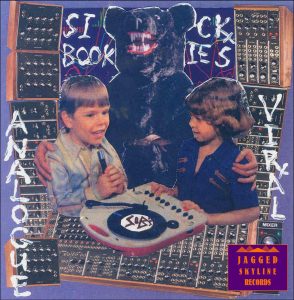 Sick Bookies – Here Is That Thing

Louder than War’s Ioan Humphreys has a listen to some ram shackled lo-fi loveliness courtesy of Sick Bookies.

Sick Bookies (great name!) are a four piece band from Lincolnshire. Consisting of Christopher Clarke, Les Overend, Mark Setterfield and Tom Smith. They are (according to their label) influenced by both their interchangeable record collections and almost schizophrenic ability to switch between 3 and a half minute lo-fi indie pop songs to transcendental instrumental improvisations. On multiple listens to the LP, I can’t disagree with that!

Analogue Viral is their second studio album proper and on first listens, obvious influences that come to mind are Pavement, Truman’s Water and Thinking Fellers Union Local 282. But this is no way a bad thing. This mid 90s lo-fi movement managed to produce dozens of quality bands that continue to influence decades on and their presence in the 21st century is more than welcome. And Sick Bookies are one of these.

Sick Bookies show an envious ability to create big sounding bass riffs, ramshackle and infectious guitar riffs and stop start laconic vocals that on repeated listens display a playfulness that immediately ingratiates one with the band.

The music that the band produces is intricate and loose to the extent of falling apart. Yet they always pick it back up when needed and continue to show the endless possibilities they have with their art.

To date they have released two albums based on improvisations from the practice room; “Volume Won” [2015] and “Volume To” [2017] and two studio albums “Magnet Hopeless” [2015] and “Analogue Viral” [2016]. A third studio album is currently being recorded and with Sick Bookies so far been played by BBC 6 Music’s Steve Lamacq, Gideon Coe and Stuart Maconie, who knows what awaits this band going into 2018.

Analogue Viral is released on cassette as part of Cassette Store Day on 14th October.