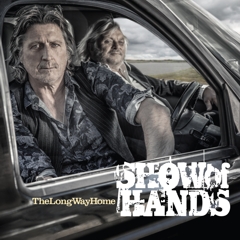 Some twenty plus years into their career there’s talk of  them returning to their musical roots.  Phil Beer and Steve Knightley’s first album since 2012’s  ‘Wake The Union’, arrives at the back of  a tour up and down the country where they’ll have been doing the decent thing and teasing up the new songs in their rightful place onstage. Mike Ainscoe checks out the recorded evidence.

So what does returning to the roots entail? Something possibly to do with one of their most famous songs which goes by the title of……‘Roots’, which despite its political connotations, thoroughly explored on the song’s release, essentially  champions good old British values, something Show Of Hands have always had at their core. And that’s also despite Steve Knightley singing in ‘Walk With Me (When The Sun Goes Down)’ that he doesn’t want to sing any more about the urban poor, country life or greedy bankers (and no that’s not cockney rhyming slang).  Perhaps he’s spotted the potential  danger of  becoming a parody of himself.

Yet, having said that, apart from  theatrical spoken word elements to the album opener ‘Breme Fell At Hastings’ there’s little to surprise their regular audience in a collection which pulls together the usual themes of songs of war, travels,  exiles and seafaring. A set made up of Knightley originals, a few of the expected trad. arrs., a cover of Dick Gaughan and Brian McNeills’ story of English hero and watchmaker John Harrison, and  a  couple of contributions from Topsham (that’s their neck of the woods) songwriter  Chris Hoban – his ‘Hallows Eve’ in particular will be familiar to anyone who might have been at recent gigs, knowing the SoH penchant for trying out material before committing to record.

It’s all  housed in a package with some atmospheric photographic art based around a series of evocative monochrome images of the pair looking all rugged against  stormy skies, peeling paint and rusting ironwork on a nautical theme. Quite apt then that there’s a modern sea shanty from  German based duo Broom Bezzums’ – ‘Keep Haulin’  a splendidly chorused piece and given what the band have called the Fishy Friends treatment. Possibly with the aid of a few drinks in the backroom of a local pub. Allegedly.

Going back to their roots could also refer to the  acoustic rock and roll roots of ‘Sweet Bella’, which  might shift the goalposts a little, or more likely the coats on the ground, but it’s quintessential Knightley. He could do metal, he has the hair for it after all,  and you’d be able to spot him instantly. Talking of which, Phil Beer and his instantly recognisable fiddle, also gets to take the lead on two traditional songs – traditional in every way too, both the content (and title) of the archetypal English rural song ‘Twas On One April Morning’ and ‘’Virginia’, a tale of convicts transported to the American colonies, deeply rooted in the folk tradition.

And guests abound, all playing a little part to decorate the already richly laden SoH sound;  award winning duo Philip Henry and Hannah Martin plus Jackie Oates are in there and Ange Hardy returns the favour of Steve’s contribution to her stunning ‘Esteesee’ and last but not least,  the wonderfully named Bridge Inn Shandymen on vocals (rivalling the Hicks St Chip Shop Singers on Richard Hawley’s ‘Hollow Meadows’).

‘The Long Way Home’ is a classic case of Show Of Hands keeping on keeping on; bringing what they do on the road to the studio and gracing a new set of songs with their lush sonic tapestry.

You can listen to ‘Breme Fell At Hastings’ from the album: