The languid strum of guitar strings, the lonesome wail of a harmonica, a black-clad figure in a desolate landscape… welcome the wild wild West Country.

The opening bars of Shoun Shoun’s new single Refresh & Replay evoke the opening scene of a spaghetti western. But instead of a lone rider beneath a baking desert sun, chewing on a cheroot beneath his wide-brimmed hat, we get a tracking shot of a hooded figure in black walking through some long-abandoned industrial quarter of Bristol.

Its derelict buildings are covered in graffiti; an overgrown grass verge leads down to a murky river; tower blocks stand sentry in the far distance. Abruptly, the figure turns, stares into the camera, and pirouettes before unveiling a repertoire of sultry modern dance moves amid the rotting wood and rusting metal girders.

It’s a compelling introduction to Refresh & Replay: the bastard child of Polly Harvey and Nick Cave (something that would have been entirely plausible in the mid-90s, around the time of The Boatman’s Call) shot by Sergio Leone and scored by Ennio Morricone. And it’s a tantaslising taste of Shoun Shoun’s forthcoming and so far unnamed album, due towards the end of this terrible year. 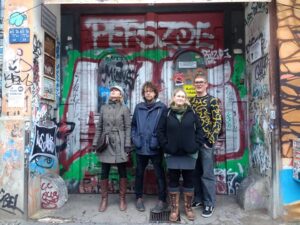 Moody, sinister and hauntingly melancholic, the style – dream pop filtered through garage rock via the urban ennui of Marlene Dietrich and The Velvet Underground – is a departure for front woman Annette Berlin following years of battling ferocious noise in Bristol bands Big Joan, Male, The Final Age and Rose Kemp.

So too for her new band Shoun Shoun – Boris Ming (violin, synth), Ole Rud (bass), Amy Hag (drums) – whose collective CV includes other institutions of the Bristol underground like The Moonflowers, Mooz, Patrick Duff and Chikinki. Amy (pictured with the band) has since been replaced by Giuseppe La Rezza on drums.

The video, shot near the Cumberland Basin in Bristol, features Bristol-based ballet dancer Sara Louise Mather. The band won the 2019 Glastonbury FM songwriting competition for A Hundred Trips, taken from their debut EP in January 2019.

Their single, Much Sweeter, went on to catch the ear of Tom Robinson on BBC 6Music Introducing in May, alongside fellow Bristolian and LTW favourite Emily Breeze, and was played live by Shoun Shoun on a session for Resonance FM.

Shoun Shoun are hoping to celebrate their next album with a gig – remember them? – towards the end of the year. Coronavirus permitting, of course.

More about Shoun Shoun on these links: