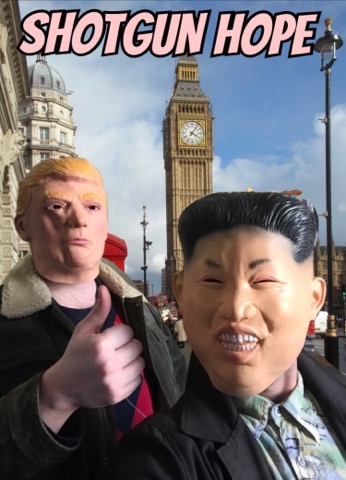 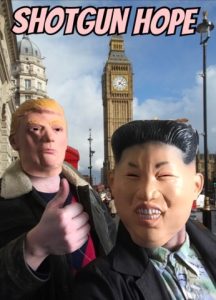 Having a band member famed for changing his name to that of his past record label may give some indication that Shotgun Hope may have a slightly less than orthodox approach to making music. Being a ‘serious’ artist and all the pretentious crap that implies seems refreshingly absent. Labelling themselves as subtle pop, the band produce pared down but inventive tracks, often featuring old-school electronic beats and distorted samples to bring out their first album, Shake Well, via Bandcamp. Alan Trashmouth Records, formerly of BAT-BIKE, is no stranger to self-releasing albums, a great way to throw your creativity into the ring with permission from no-one. Along with Kenneth David Cousin, he has begun Shotgun Hope. The Glasgow duo are experimental in the extreme. In their own words.

‘We say punk is learning no chords, singing about nonsense. Get a Mac on credit. Make enough choons til you get laid off and can’t afford the payments.’

The ‘choons’ begin with Hey Boo Boo. From its slurping start and siren led electronic pop, this is a woozy, trippy affair. There are distorted vocals aka early Prodigy and drum machine-tastic beats. Wrong Number is more disco wonk pop with its almost six minute dissection of, well, a call to a wrong number. It has all the right ingredients: keypad sounds, ring tone and the eponymous ‘Hello, I think you’ve got the wrong number.’ ‘Nonsense’ it might be, but it makes for a great pop record.

Love Abortion is slower with slightly tortured sounding vocals. The tempo raises with Come Up, featuring more repetitive interesting sounds; intriguing and dreamlike. The next track, The Fucking Madness of Life, is a departure. The electronica gives way to strummed guitars and a dreamy over-voice, which gradually becomes more fraught in keeping with the content of the song. The backing vocals have a faux-grandiose quality, re-enforcing the distressed feel of the track. Such Enthusiasm continues the laid-back feel, with the louche spoken vocals. The retro-electronic feel returns on the last track Other Men. The ostentatiously spoken vocals make this one of the most exciting tracks on the album.

Shotgun Hope may say they sing about nonsense, but the songs hang together extremely well. Some may find them a little long, but their repetitive nature is a strength rather than a weakness. Shake Well is a promising start.