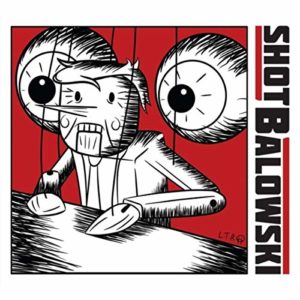 One of the albums of the year for this writer has been the self- titled debut from Shot Balowski. If you’re unfamiliar with it, I’d heartily recommend giving it a listen. If you’re a fan of literate punk-influenced music a la The Manics, you’ll love this. It’s great to hear a band from the (for the most part) ridiculously conformist punk scene doing something that’s future-focused and pushing the boundaries. Wasn’t that what is was meant to be, in the first place? Simon Whittle spoke to LTW and rather than an interview per se, we thought it would be more fun for him to talk us through the tracks on the album with a bit of insight into where they’d come from and the thinking behind them. Take it away, Simon……

Emily Does – “If there had been an Emily Wilding Davison cartoon in the 1980’s, this is a full-on punk rock cover of its theme tune. Wrote this after reading Lucy Fisher’s biography of Emily. Davison used to throw bricks through the PM’s windows, wrapped in a note that read, ‘Rebellion against tyrants is obedience to God’. The sample is Ana Matronic of the Scissor Sisters on what punk means to her.”

Critique of Everyday Life – “I had this tune on the go for a while. We had to review the lyrics a couple of times cos it name-checked politicians who since became has-beens. Used to have the line, ‘An inbred PM, leaning on a sad Lib Dem.’ They were propping up the Tories earlier this decade – after the EU elections, it could be the other way round. How rotten is UK politics, when the Lib Dems pick up protest votes? Politicians come and go, and they get forgotten – it’s the hierarchical structures that bore them that need to be overturned.”

Commander in Cheat – “Written on the day of Trump’s inauguration. With Trump at the head of the climate change-denying, warmongering, woman-hating GOP, this makes them the most dangerous organisation in the history of the planet. Imagine him and Boris…? We’re nearly doomed as it is. I wanted the music to be like something off ‘Last Scream of the Missing Neighbors’ – I thought this was too close but the band liked it, so we recorded this after one rehearsal. Same with Nissan Poppy, Emily Does, American TV, Suicide Forest – much of this album was written while it was being recorded in Dumfries.”

Muhammad Ali – “Ali was radical AND world famous. He deserved a tune, and this one concentrates on his most radical years, when he was an obvious threat to the rich/white status quo in America. I wrote it in the first person – he’s a very quotable fella. Sneaked in the line, ‘King and I and X were not born to bleed,’ so this song mentions ‘The King and I’. Well, I laughed…”

Destroy the Daily Mail – “There’s a lot crammed into three short verses. Hate mail for the Daily Mail. The middle-eight didn’t have a solo, so I sent the writer Patrick Jones the lyrics and the raw recording and asked if he’d write something for it. He’s worked with John Robb, Billy Bragg and Nicky and James from the Manics, of course, and many others. He delivered the goods, a pile of Mail-esque headlines – his bit is just awesome. It takes it all to another level. I wasn’t around for punk; I had the Manics and Patrick Jones – they were my Sex Pistols.”

Nissan Poppy 24/7 – “About people who have politicised the poppy to the extent that it’s now perceived to be a badge of forgetfulness, of intolerance in a governmental cold war against the populace. Some ‘punks’ won’t get it. That’s why we’re here. You’re welcome! Not specifically aimed at Nissan drivers or poppy-wearers, but I love a silly title.”

American TV – “The TV star president; the TV star princess… I wanted to tear apart the idea of the American dream, and TV and film is a big part of that. I don’t hate the US people – I’m reading about the American Revolution at the minute. I love how they recognised that Westminster was taking the piss, so they just turned round and said ‘Fuck you!’ – there’s a lesson in there…”

In the Suicide Forest – “A bit of prose about the Logan Paul suicide forest incident. It was written as a poem, then we thought it could be an intro to the next song, You Love Yourself, cos it kinda fits in with its theme, but we thought, why not let it stand alone? Vloggers are the new pop stars – wait till they move into politics. There’s already hacktivists who’ll take over your printer or smart TV, just to tell you to follow some vacuous baw-bag vlogger. Interesting times…”

You Love Yourself – “A post-punk pop at the news, and it turns round and calls the viewer a muthafucker cos most people just lap up what they’re force fed. With the media being sewn up, you’ve got to put a bit of work in to find anything close to the truth. I don’t mean conspiracies or conspiracy theories. It’s all about power and fine balances of power and relationships, in the end. And complete silence when things should be shouted from rooftops.”

The End of Friendship – “Wrote this one years ago. Not about anyone in particular, just a bit of teenage angst, with Thunders/Lure-style lines like, “You never called me on the telephone.” And the years have turned it into hectic, breakneck punk rock. Solos borrowed from early Blondie.”

Redemption Song – “When we were thinking of covers and Redemption Song popped up, the arrangement came really naturally. I already knew the original like the back of my hand. We’d tried some Amy Winehouse and La Roux and stuff, but we gave up on them. The last thing we covered was Territorial Pissings – but we just did it like the original. Sometimes, we just wanna have fun.