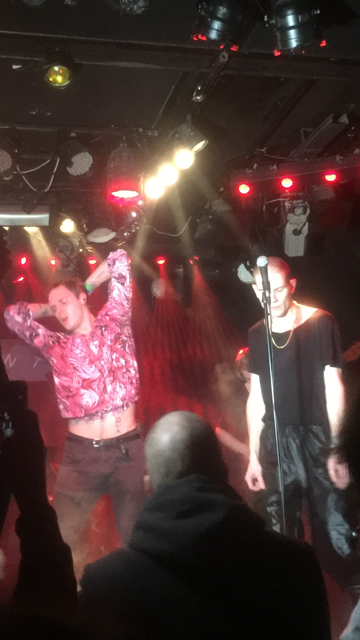 LTW boss and Membranes singer John Robb went to MENT festival in Ljubljana and found yet another amazing Russian band who combine a post industrial electronic throb with a haunting falsetto vocal, guitars, Belgian new beat and soundtrack into a compelling and brilliant whole.

As we have mentioned many times in the past year on LTW, the mighty and endless Russian bear is having not only a creative renaissance but its peak musical performance ever.

In some of these lists like this one where we already mentioned Shortparis or another list here we have tried to keep up with this mesmerising scene of bands and they just keep coming. This week are at the brilliant MENT music festival in Slovenias’s capital Ljubljana and as ever our minds are being buffeted and blown by all manner of bands generally from East Europe who care little about the poisonous music business dollar and make music on their own wonderful terms.

The last band of the evening is St Petersburg’s Shortparis and they are a truly serious business.

When they take the stage and even before they play they set an intense and powerful atmosphere that has the ghost of Ian Cutis twitching with their deep eyed singer with his Bowie kecks and dark eye stare and chiselled cheekbone face staring into the audience before the music stomps in with its astonishing mixture of Belgian new beat, techno stump, accordions, freak electronics, Russian folk melodies entwined with a post-industrial falsetto, Einsturzende Neubauten inventiveness and deconstruction and a stunning drummer who plays against the tracks with an almost Shellac style deconstructed assault. This is a true death disco – a post-industrial dark and thrilling ride on the dark side that you can dance to. A thrilling combination of electronics and post-punk deconstruction with operatic vocals.

The whole thing is jack knife full of rhythm and power and when the singer starts to sing in this glorious falsetto like a psycho jam between Billy Mackenzie of the Associates or even Sparks but totally on his terms because, to be honest, it’s pointless trying to roadmap a band like ShortParis’s sound – because they sound like no other.

Their music is full of groundbreaking action and intensity and a dark and melancholic danger, they are the post darkwave, they have the songs and the charisma to fill the Depeche Mode stadium circuit, they sound like the 21st century now, they make electronics sound warm and human and full of vim and fuck and the singer does these wild sex dances that part hypnotise the audience and part terrify them.

In short ShortPatis are the band of the moment.

The whole room is dancing, transfixed on the music that is restless and powerful and full of the throb of primal dance and the space of Martin Hannet’s unique vision for Joy Division, they are so original and so now, they reflect the darkness of these times but you can dance to them, they are the huge room fuelling wobble of electronic and the direct possibilities of rock.

They are the now.