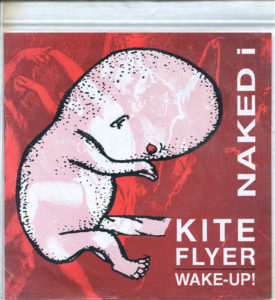 LTW boss John Robb has been forced by the lockdown to have a sort out of the darkest recesses of his record collection; he has unearthed a couple of 7″ singles he produced many years ago.

Naked I comprised the three Collingham brothers; Joel, Nijel, and Sean who all lived in Devon.

John Robb was invited by the band to produce their third single ‘Kite Flyer | Wake-Up!’ which was released on the Thrill City label in 1995. John was running the label at this point. The single was offered with offered with Here Be Monsters Fanzine #8.

Its a really good, powerful sounding indie/alternative rock release that frankly should have been rewarded with a full length album.

We have a dozen copies, pressed on black vinyl, with a white label centre (the titles are hand written) in a fold out sleeve housed in a clear zip-lock bag.

These are mint un-played copies.