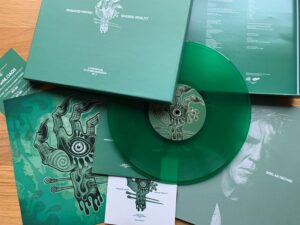 This summer sees the release of Part 3 of the Countdown to Pharmageddon series of box sets by Paranoid Visions. Like parts 1 and 2, part 3 comes as a 10” coloured vinyl record presented in a box with CD, inserts and a poetry book by the bands vocalist and lyricist Deko Dachau.

Unlike the first two, part three carries an additional CD of bonus material and a download card for a remix project of various tracks.

In keeping with the bands history of working with additional artists, Diverse Reality includes the track “Alphabetty Spaghetti”, a 26 verse song featuring a cast of 26 guests voicing an alphabet letter each and combining into a sampled chat through the track as The Alphabetty Choir

The record also includes the track “Lie No More”, effectively a new set of lyrics written for the Poison Girls track “Cry No More”

‘when a band as perfect as Poison Girls does a track as perfect as Cry No More from and album as perfect as Wheres the Pleasure, there’s little point in doing a straight cover and little point in trying to improve on perfection… that’s just impossible, so Deko wrote new words inspired by theirs and we put them to the music…it’s a tribute rather than a cover. For the sake of interest, we also did the original lyrics as one of the bonus tracks though, along with our covers of Dirt’s Hiroshima and Crass’s G’s Song’