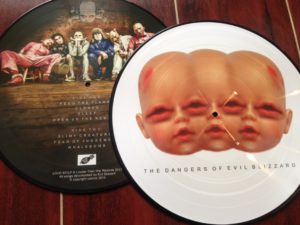 ‘The Dangers Of Evil Blizzard’ was initially issued on both CD and LP (Pink Vinyl) – the pink vinyl rapidly sold out; Louder Than War Records have now re-pressed the album, but this time as a picture disc – only 400 copies were pressed, the majority have gone already…grab a copy now.

The album was recorded live in one take at Sunshine Studios in Manchester by Andy Gibbon (who has worked with The Fall amongst others).

Recording it took 5 hours…Mixing it to emulate the chaos of them live took 5 months.

‘The Dangers Of Evil Blizzard’ Tracklist:

February 4, 2015
We use cookies to ensure that we give you the best experience on our website. If you continue to use this site we will assume that you are happy with it.Ok