John Robb: The Charlatans, We Are Rock 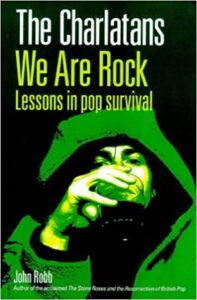 John Robb: The Charlatans, We Are Rock

In the crazed aftermath of the late ’80s northern pop explosion there have been few survivors. The Charlatans, however, still prosper despite once being perceived as runts of the Manchester music scene. The cruellest of luck has visited heartbreaking death, nervous exhaustion, a jail sentence, and the prospect of falling almost totally out of fashion upon them. And yet, a deceptively tough band with a charismatic lead singer, their combination of unnerving honesty, sheer pop talent, great live shows, and a total and touching commitment to their fans has seen them survive some of the worst disasters that fate has thrown at any pop group. They have remarkable street suss that, with their small town backgrounds makes them totally at one with their huge following — a relationship that has given them a fistful of number one albums. This is a tale of a love of pop and a lust for life. A story of northern pop and a band with guts and a passion for creativity. It traces the rise of the Charlatans from the fringes of the Manchester scene in the late Eighties to their current position at the top of British music, one of the key bands of the Nineties in possession of a rare and beautiful canon of great pop tunes.

First published in September 1998 – now long out of print.

We have 2 SIGNED copies, new but showing minor storage wear, hence the price.

Be the first to review “John Robb: The Charlatans, We Are Rock” Cancel reply