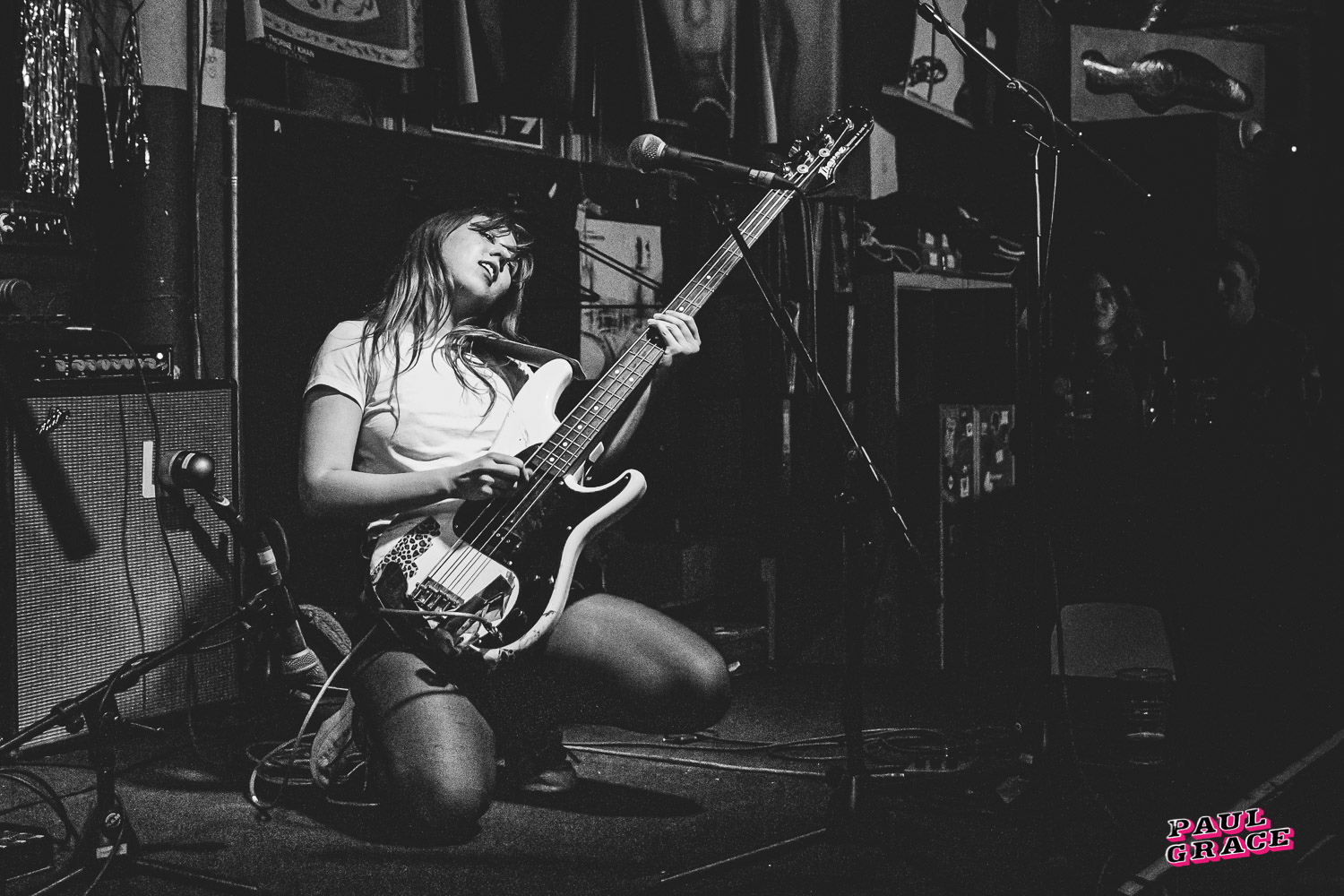 With a selection of homebrew releases dating back to 2016, and a recent collaborative stint with the Melvins, ShitKid are back to terrorise British audiences for a week-long run of shows. Keen to investigate, Brett Dunford checked out the Swedish electro-punk duo at Rough Trade East in London.

There were several gigs that I could’ve reviewed from the roster this week but I chose ShitKid. The name just grabbed me. I hadn’t even heard of Åsa Söderqvist or Lina Molarin Ericsson until that moment. And it goes to show how out of touch I am because the first person I met outside the venue was a young lady who had travelled from Israel. 3,000 miles is quite a journey just to see an off-radar band from Sweden at a grungy London record shop for half an hour…

Alex Chilltown start off the show. All of the groups play for around thirty minutes apiece with fifteen-minute breaks betwixt, so none truly shine or outstay their welcome. While sonically different to the looser, crazier shenanigans of the following two acts, Chilltown’s dreamy indie-rock offerings are big, breezy and easy to sway along to. 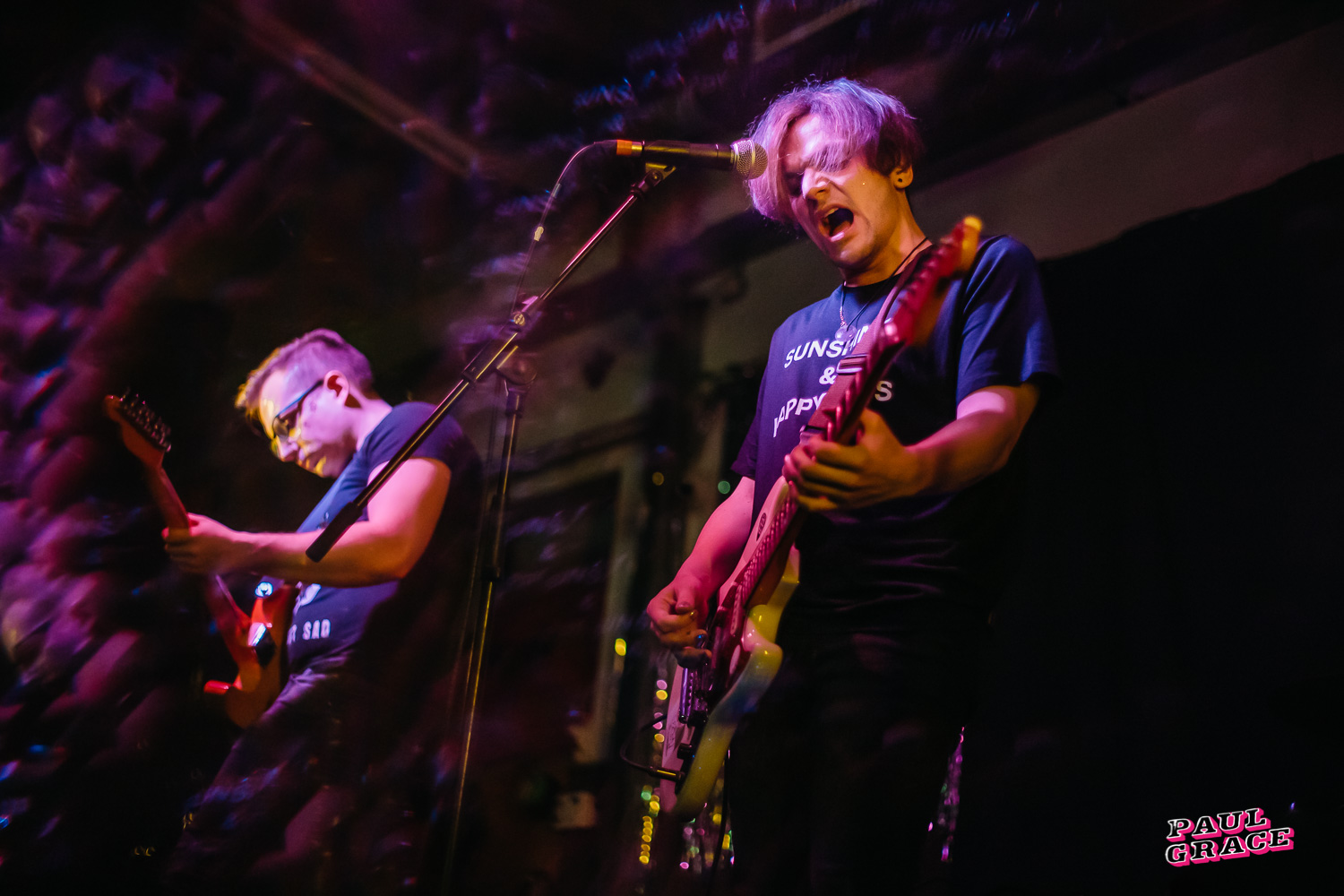 The singer has an androgynous appearance and is charismatic enough to charm the crowd. The drummer pounds hard. The guitarist walks around with his axe aloft. My Vitriol-ish. Gothy. Psychedelic.

Speaking of psychedelia, when Fruit Tones took to the stage, I wondered what year they were all living in. The singer/guitarist looks like Tony Iommi circa 1972, the drummer looks like a cross between Robin Askwith and Gaz Coombes, and the bassist looks… well, like a bassist (I know at least two people who’ll give me flak for that one, soz). 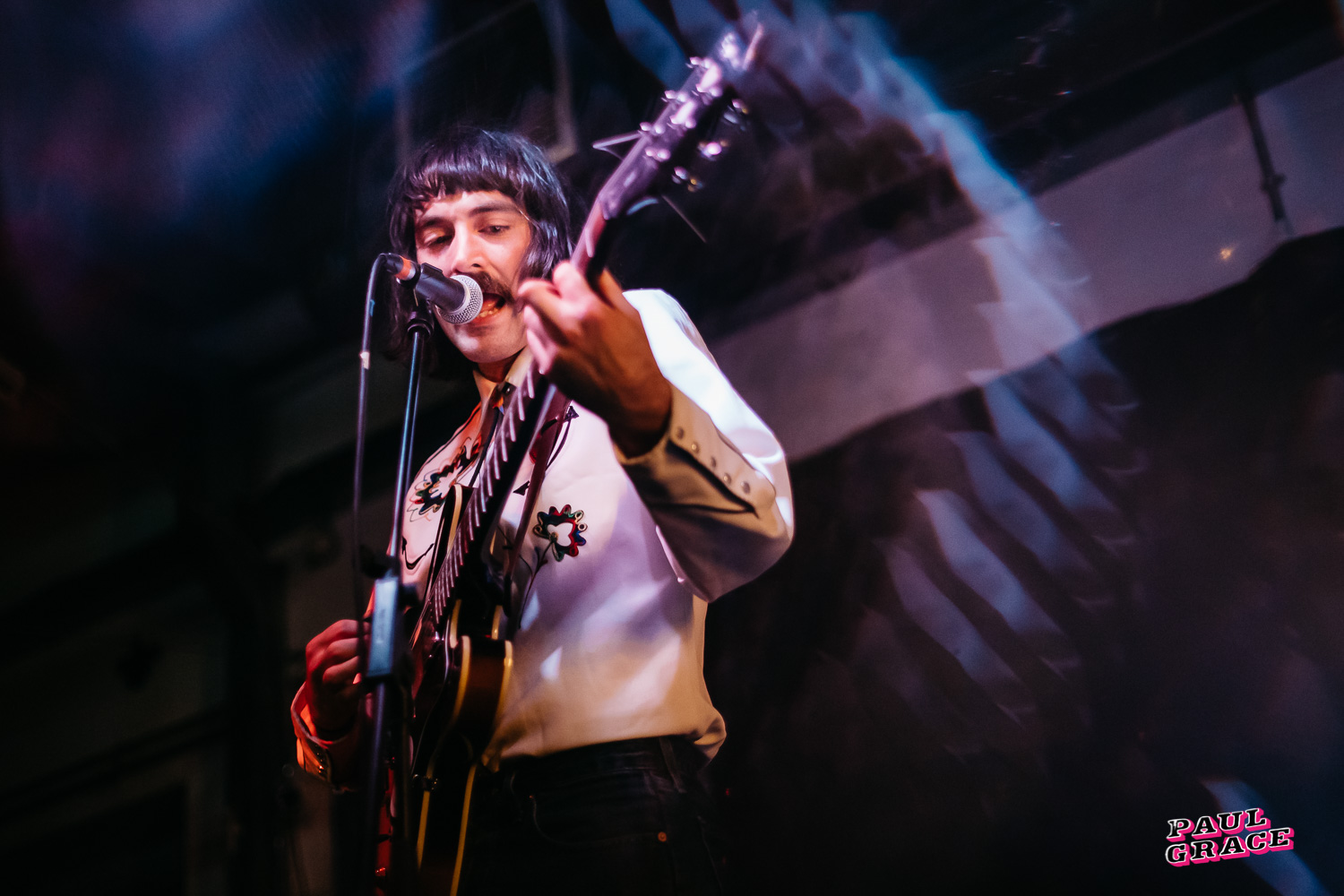 But these cats from Manchester are electric! Think of a cocktail consisting of Thee Headcoats, with a dash of the New York Dolls, garnished with the humour of The Hives, and you’d be warm. All three members connect perfectly, whether they’re rocking out or indulging the crowd in sarcastic banter, and I wasn’t prepared for their rapid, earthy old school jams. They could steal the show from any headliner, which is an uphill task even when ShitKid are playing at their worst. If it wasn’t for a previous commitment, I’d be watching them again tonight.

By the time tonight-tonight’s ‘headliners’ hit the stage, I was beginning to wonder if I would indeed be viewing Shitkid at their worst. A series of technical problems threatened to chew up their time-slot. First Åsa’s equipment. Then Lina’s. My photographer for the event, Paul, spoke in my ear, ‘Oh, shit. Her guitar keeps cutting out’. I then spoke into the ear of the young lady from Israel, ‘Oh, shit. Her guitar keeps cutting out.’ And her face was literally, ‘Oh, shit…’ 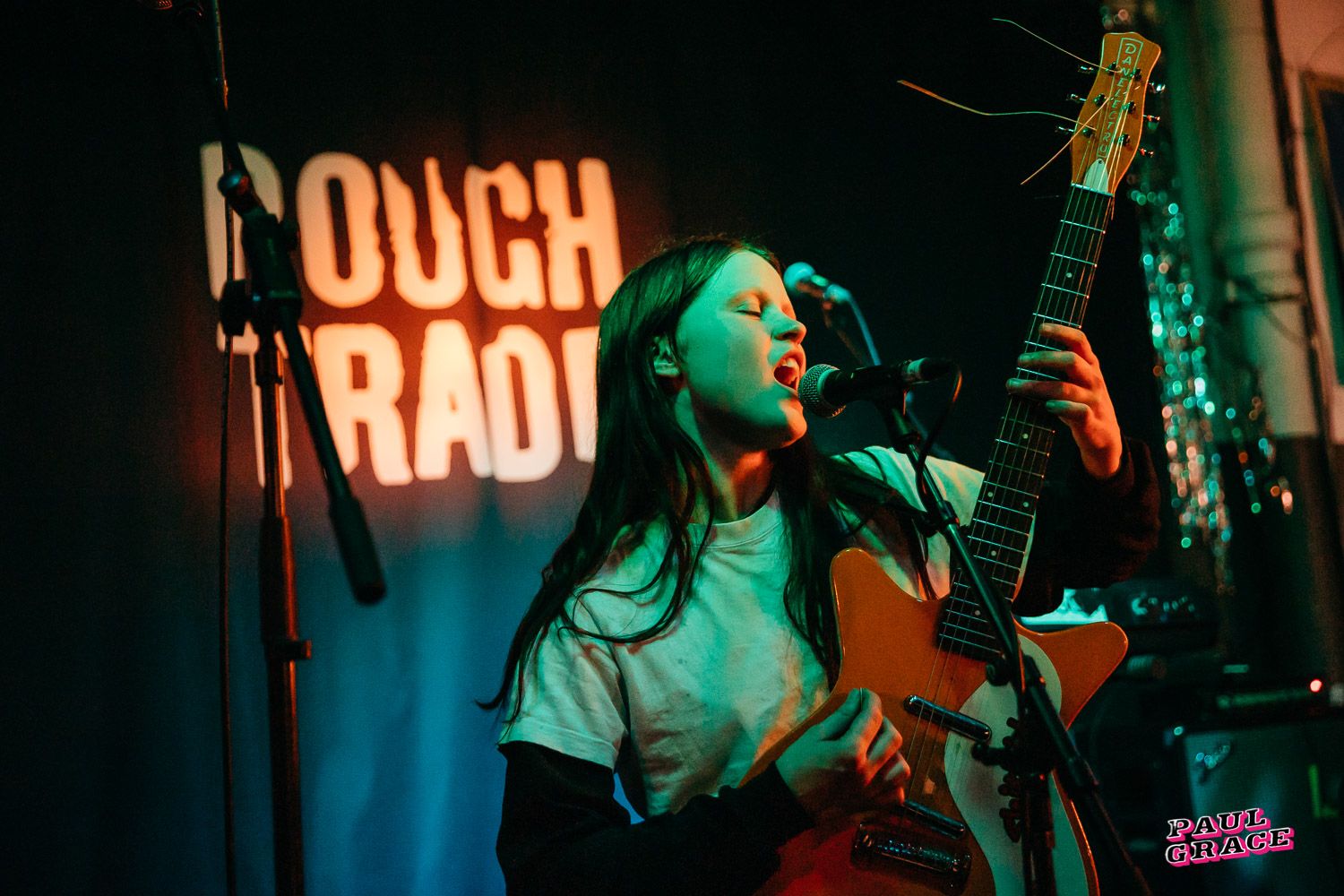 Thankfully, intervention came (numerous times) and the girls dropped straight into the dirty slink of Feels Like the Movies. It’s hard to describe them. Let’s just say they’re either your bag or not. Minimalist punk. Sometimes electronic. Oftentimes incoherent. Always fun.

Romance came next and was played incorrectly from start to finish. Did anybody care? Nope. It didn’t stop me from enjoying myself. In fact, they screwed up a fair bit throughout the concert. And that’s the thing: ShitKid could fuck up your whole life and you’d still forgive them because among all the bum notes, feedback pops, and general sound of everything being held together with duct tape and chewing gum, they’re loving every single minute of it. And the small crowd gathered in the heart of Brick Lane were loving every single minute, too.

‘This next song is called Romance’, announced Åsa straight after playing the exact same song. It’s hard to tell if it’s a put on or not. ‘Oh, wait,’ she corrected herself with a coy grin. ‘We just played that one. Sorry.’ 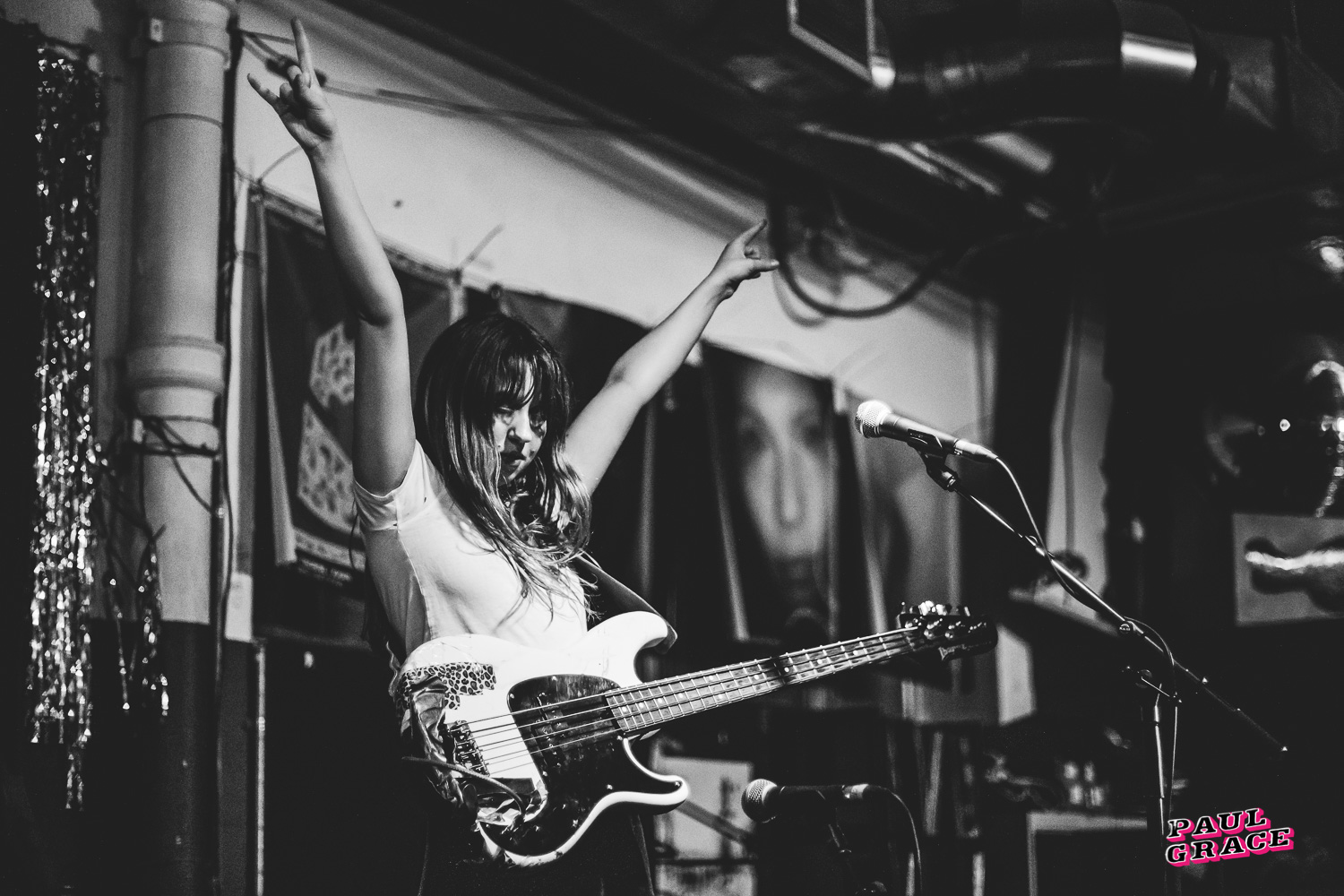 I think Get Jealous was next. You’ll have to forgive me for not writing down a set list; I was too gleefully distracted to care. The four chief numbers that make up their latest record, Duo Limbo, were performed in pulsating, sludgy fashion. Lina shone. Sliding around, pulling off trademark bass girl moves; on her feet, on her knees, on her back, and even playing with the instrument behind her head at one point. She puts on a spirited display.

And… oops! Åsa just messed up the lyrics to their Basement Jaxx-esque thumper High Way. Again, no fucks given. She’s just bopping around the place with a grin.

Anger MGMT and Eagles Over America were both in there somewhere towards the end. Despite Åsa’s gaffes, she’s a great vocalist and competent musician who can belt it out shrill and deep. You’d probably think she was American if you didn’t know anything about her. Exudes a cocky attitude that’s reminiscent of a rebellious teenage daughter who got busted for stealing her dad’s car. 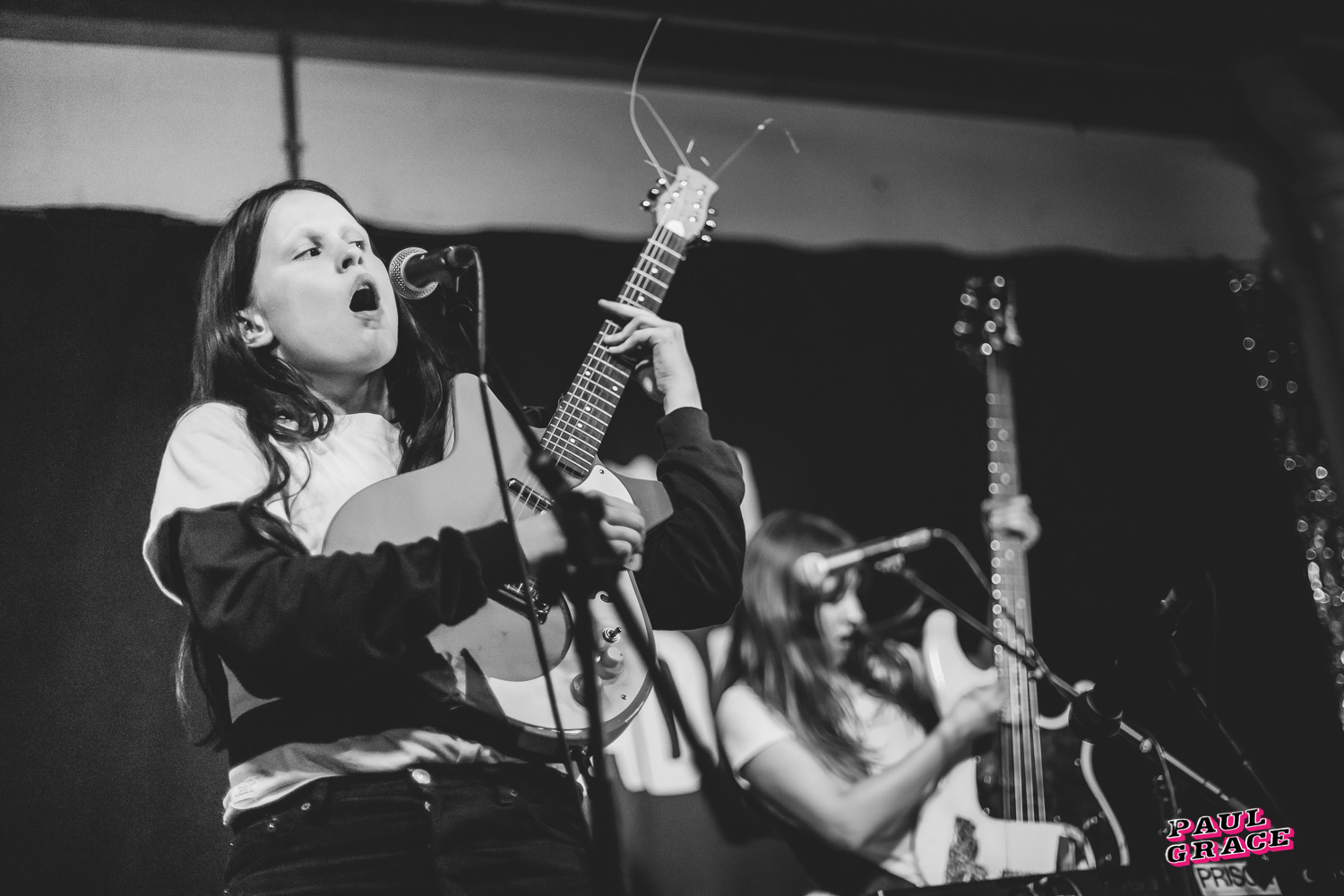 ‘Hey,’ she addresses the amused crowd with an enquiring tone. ‘Has anybody got any weed? No, look. I’m serious. Can anybody get some weed?’

I kept my smirking mouth closed.

Sugartown wrapped up the set and went down a storm. It’s easily their best-known song and buzzed away like a metronomic hornet. The crowd were totally going for it. Lina slammed her guitar down on the keys during its catchy chorus, while Åsa slurred seductively into the mic: ‘I’m off to Su-Su-Su-Su-Su-Su-Su-Su-Sugartown.’

Sandpaper rough around the edges, ShitKid provide a soulful live experience. Visually energetic, boisterous and borderline shambolic, they are musically dark, deviant but addictive. If you’re in the London area, they’re playing at the Old Blue Last in Shoreditch on February 8th, so, if you want to see what all the fuss is about, go check ’em out. You might just fall in love.

Information on Fruit Tones can be found at their Bandcamp and Facebook page.

Information of Alex Chilltown can be found at their Bandcamp and Facebook page.

Words by Brett Dunford. You can read more of Brett’s work with Louder Than War at his author’s profile.