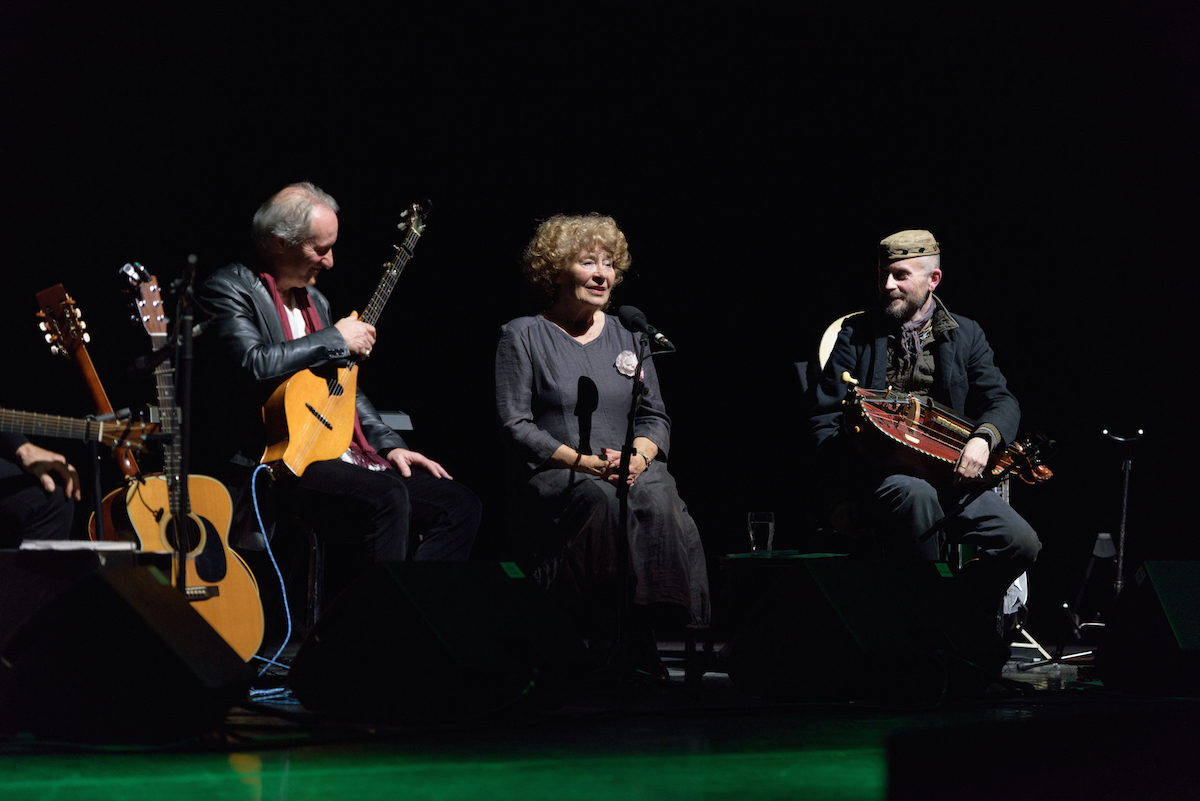 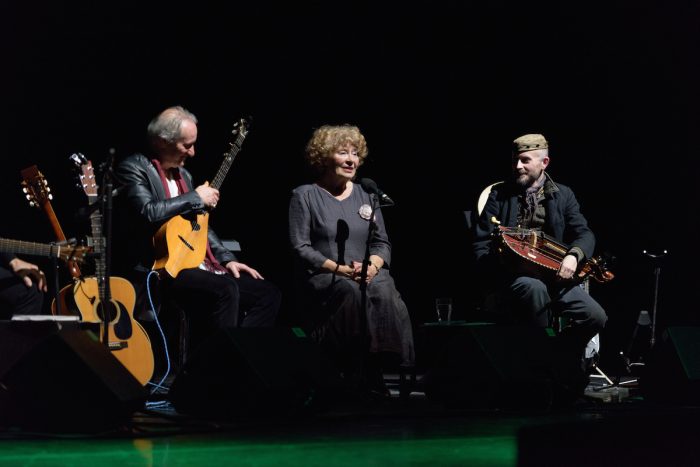 An exceptional evening in the presence of an incredible artist, the wonderful stories and equally brilliant songs leave everyone in awe of Shirley Collins.

Late last year saw the very long awaited release of Shirley Collins latest solo record Lodestar, it was received with huge critical acclaim. Rightfully so as Lodestar is both wonderfully intense and humorous in equal quantities, so an opportunity to see a true living legend in the flesh was hard to pass up. First up though were a couple of very special guests, with two of Shirley’s band members Pete Cooper and Dave Arthur taking to the stage first. 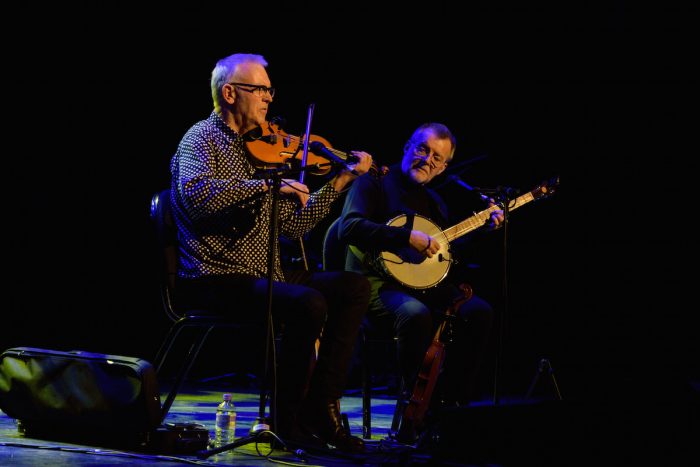 Their short set sees them delving into the vast catalogue of American folk songs, with a couple of a jovial numbers to get the evening off to an amusing start. There is also a murder ballad involved so it isn’t all fun with these two, it’s all over too soon though as Emily Portman is welcomed on to the stage. A couple of more downbeat tracks follow as she opens with some beautiful and delicate traditional folk songs.

Her sweet voice is particularly endearing, as we fall under her spell she then welcomes another exceptional folk singer in Alasdair Roberts to the stage. The duo combines to sing a couple more beautiful tracks, explaining each before playing them. That is the real beauty of the evening every track comes with a poignant story regardless of how bizarre or outlandish it may seem these folk tales enthral and enthuse adding to the passion. Its an impressive set from the duo, and there is still one more element to the first half. 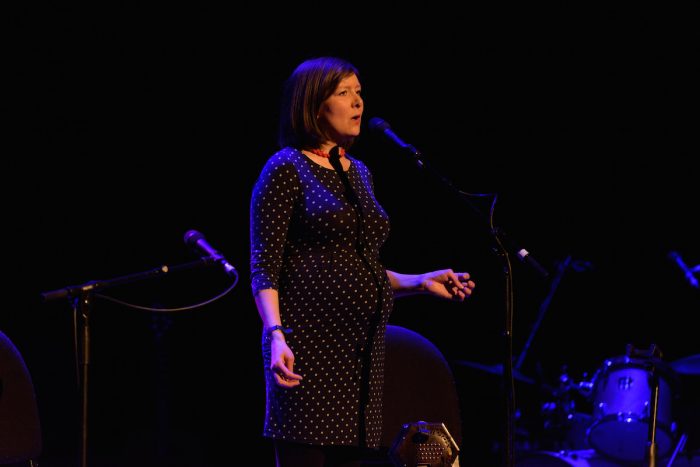 You can hear throughout Lodestar the jangling of Morris bells, but tonight drawing on local tradition they welcome local Rapper Dancers Star And Shadow. If all that had gone before them wasn’t brilliant enough these ladies top off a brilliant first half with an awesome rapper dance that leaves everyone aghast at their talents. With so much excitement before Shirley Collins has even set foot on the stage.

Following a short interval and with the crowd safely back in their seats, Shirley makes her way to her seat at the back of the stage. As she opens with Awake Awake/ The Split Ash Tree/ May Carol/ Southover which is a tale of revenge, this epic opening is the perfect way to begin. It’s dark and shape shifting Collins passionate in her delivery, the combined visuals bringing the song to life. 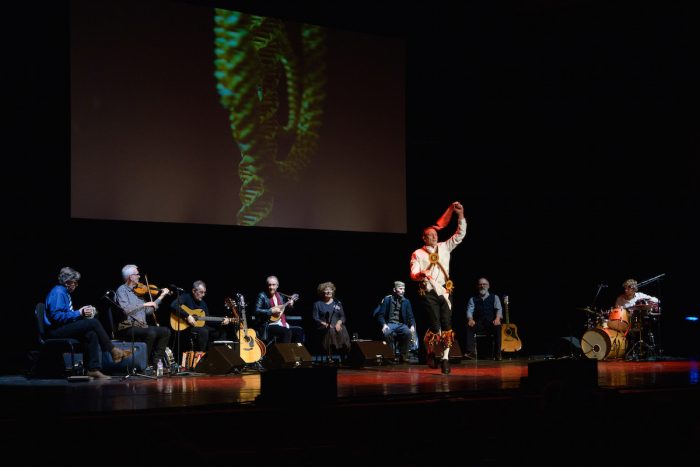 As with the other artists tonight every song is preceded by an anecdotal story of it’s origin, Pretty Polly being a particular funny one allowing Collins to share a personal story about how this song came about. The song itself is captivating and features Collins attempting to sing a line that lacks the correct number of notes to words, which provokes an excited crowd reaction.

Old Johnny Buckle breaks the darkness of the evening with its contradictory terms, and daft lyrics it lights up the room and prevents the morbid nature of a lot of the tracks from setting in. The Rich Irish Lady/ Jeff Sturgeon was at the opposite end of the spectrum and much like tonight’s opener a gloomy and urgent track but no less intriguing. 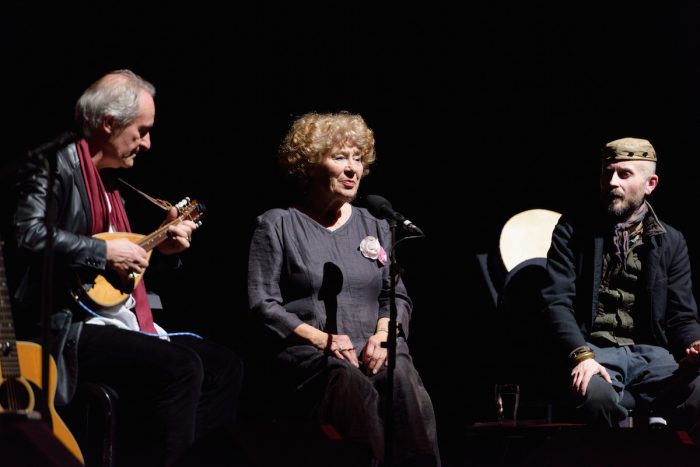 In all it’s an incredible set from a true living legend, her influence is incredibly wide reaching and it’s plain to see why. Her endearing nature and wonderful voice and equally enthralling stories bring to life the songs, in a world of mediocrity and generic formulaic music Shirley Collins sheds light on incredible songs from the past and long may they live on.

~
Shirley Collins can be found online here shirleycollins.co.uk. She also tweets as @ShirleyCollins.