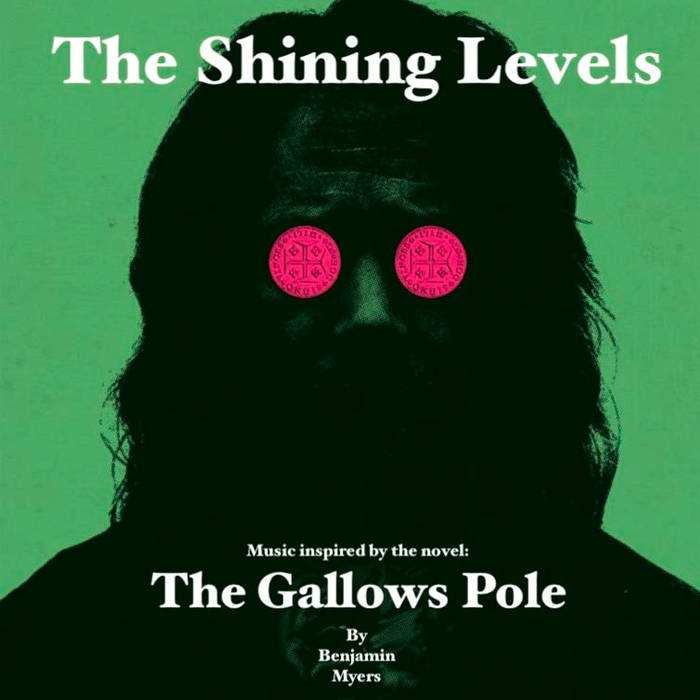 I often apply the word ‘escapism’ to music I enjoy … and yet occasionally I come across an album which rather than offering escape, grips at some deep part of the self and draws the imagination open. A wonderful and resonant thing. And that was certainly the effect when I sat down to listen to The Shining Levels’ companion piece to Benjamin Myers’ brilliant novel The Gallows Pole.

I say ‘sat down’ because The Gallows Pole OST really is music to be immersed within, not just songs, but a sensitively crafted soundscape. In turn, I heartily recommend reading The Gallows Pole – which is a historically-informed tale of ‘The Crag Vale’ coiners and the coin-forging community in rural eighteenth century West Yorkshire. Listening to the album may well draw you to read it; resonating with the raw currents of nature, notes of hot human emotion and wild surges of power and defiance which underpin the narrative.

The music is cross-cultural, cross-temporal, playing on these themes and yet not shying away from using modern musical techniques, recording in a range of places and providing a contemporary perspective. I was gutted to miss their gig at The Lantern in Halifax (3rd February), where The Shining Levels presented a live version of the album… already making waves.

The Shining Levels is a musical collective put together (by Dan W Coggins and Davey J) using rural folk musicians, loops and electronics, with much of the material written and recorded on the moor-clothed edgelands of Durham and Northumberland. Again emphasizing the cross-cultural, time-shifting sensibility of the music; this is an exploration of the themes of the book, rather than fixed location.

Creating an album accompaniment to a contemporary book is after all an ambitious undertaking, but certainly holds capacity for inspired creativity – and when done well, works to build a relationship between musicians and the listener: we are all bound on this journey together. Indeed, the support of The Gallows Pole author Benjamin Myers himself, from the original publishers of the book Bluemoose and many more associated with The Gallows Pole, highlights the communal craft of this type of music. And it is indeed, well done.

‘Stag Dance’ begins the album with enchanting female harmonies, balanced however with choppy guitars and cuts of the bow which create a stirring sense of unease; the type that sets your hair on end. Rhythmic thunder of the drums and shimmering acoustics make this an evocative opener, for sure, with the track itself going on to develop into a kind of jam, dredging the listener in the immersive world of The Gallows Pole. I might just crack open the novel again (it will be the fourth time now), using this for fuel. Having after all, grown up close to the setting of the novel, the plunging and wooded valleys above Hebden Bridge…. It feels like a hit of ancestral, human home. One of my favourite tracks of the album, definitely.

‘Moonless Nights’ offers a carefully balanced contrast, coming in with beautifully played piano which pulls the attention of the listener in a different direction, allowing them to appreciate the surges of emotion – like those which underpin the book. Longing, craving… the drive of hunger. A guiding guitar and relaxed drumbeat allow this track to resonate, the lingering line ‘is it you my love?’ caught my heart like a candle. What is evident is that The Shining Levels can master a collective not just to craft mood, but evoke real feeling.

What I also admire about this album is the element of surprise. ‘Broken on a Wheel’ bursts in again differently, a flourish of strings allowing the imagery to flood open: ‘cradle me my milk white queen’. The visceral, tactile finger-picking of instruments really pushes the sense of intimacy here, enveloping the listener in a track which is reflective and wistful, rather than the violence the title suggests. I sense insight here into how communities could be ‘broken on a wheel’, so to speak, absorbed in a revolving cycle of work and toil – a reality which was faced by many of the Crag Vale Coiners.

This is after all an album of human stories and spoken history, a reality again resonant in the track ‘Valley Boys’ which plunges in with a working man’s vernacular, giving a jaunty jolt which emphasizes the exploratory nature of the listening experience. And it has to be said: anything with an accordion in it, captivates me. It is as if we are face-to-face with one of the coiners themselves (or at least ear to ear), as the listener is drawn into a shanty-like story of clipping coins, being ‘lads from the vale’, learning from the harshness of ‘ale and a crust to keep the kids fed’. The combination of guitar and piano give a gutsy rhythm which is punctuated by artful stops and aspects of rhyme, driving to the almost anthemic ‘clip a coin and fuck the crown’. This is an unforgettable line from the book, made especially evocative. It makes me want to join the chant.

Other highlights from this impressive ten-track strong adventure include ‘Progress!’ (plus who can resist a track with an exclamation mark in the title?) which wields a reflection of cruel winters, lingering illness and bursts of bitterness (I can almost taste the cold North air) …yet there is a later burr of brass instruments which still manages to mould a line of hope hot through the centre. This music takes on the textures of hardship and hope, the human continuance and determination to strive in the countryside, to come to some kind of understanding with nature.

Noted, mastering melancholy and encountering hardship can be a difficulty within soundscapes, but a number of pieces later in the album underline the skill of The Shining Levels’ technique in doing so. Whilst ‘Deighton’ is crawlingly atmospheric, ‘Men of Straw’ moulds closely recorded guitar to a kind of upbeat… and yet heartfelt female vocals tell of waiting and loss. This could be considered an evocative expression of landscapes and communities where nature steers turbulent rhythms, bringing life but also hardship and death. On that note, one of the most emotive parts of the album has to be ‘Veil of the Vale’, the symbol of ‘the money tree caught up with me’ magnified through mood-inducing strings and soaring, emotion-stung harmonies. The harmonies start with female vocals and later, the addition of a male voice, making this a tale of toil capable of bringing a tear to the eye. The billowing of brass towards the end, does it for me.

Within the course of ten tracks The Shining Levels (that is Dan W Coggins and Davey J, and their range of talented guests) have managed to bring tears, evoke warmth, wild wonder and craft exploration. The final ‘Death of the King’ seems suitably tactile, telling of a community where death was seen and felt, often violent and harsh. Handclaps, distinct keys and crafted curls of the fiddle draw the album to so a close, an almost tide-like chant ebbing into more adventures for the mind to meander on.

The Gallows Pole OST by The Shining Levels is available over at Bandcamp: https://theshininglevels1.bandcamp.com/album/the-gallows-pole-ost, now with a limited number of CDs available too. And of course, grab yourself a copy of the book. Then let the journey begin.