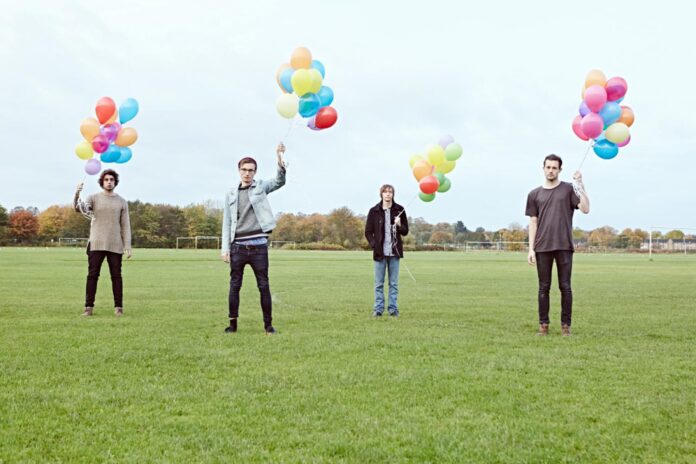 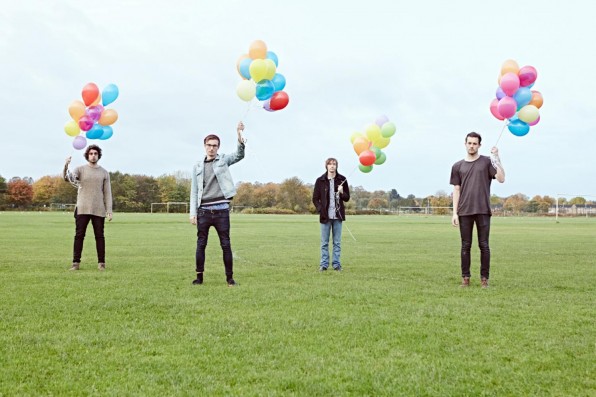 Manchester band Shinies, master practitioners of melodic guitar-pop songs, released their debut album on Monday. A great time, then, for Katie Clare to catch up with the band she first wrote about three years ago, to talk about the album, some Daily Mail brouhaha and much more.

Deliverers of a lusty fusion of pop guitars, impetuous shoe gaze and smooth lo-fi: Manchester’s Shinies have finally released their début album Nothing Like Something Happens Anywhere and it’s as vibrant as we’d hoped. The nine tracks don’t just exude engaging vigor but also a sweet harmonious melancholy and like their single and EP releases before them, the album is full of flirtatious and evocative lyrics. Louder Than War and the Shines met up for a few beers and a chat about the release itself, about videos and, of course, biscuits.

Childhood friends Adam and Ric once upon a time moved to Manchester where they met up with Tom. With the three of them having long held a desire to be in a band they did just that and, armed with a great demo, it all came together when they met Joe, who takes up the story…

“I’d been in bands before, mostly metal bands, but decided I needed to step back from the angry stuff. I was a guitarist but these three wanted a bassist. They’d been offered a load of gigs off the back of their demo and so I became the bassist…”

Tom chips in … “That was down to the NME writing about the demo – it kind of seemed like success overnight.”

Adam: “We are very DIY and we hadn’t set out for that to happen – and we didn’t set out to sound like anyone, it was just something that came about.”

Louder Than War: Was that the same with the name?

Ric: “We started scribbling loads on a wall and picked the least ridiculous, there were some real gems in there.”

Adam: “Like The Allen Keys and the Flat Packs!”

Louder Than War: “Putting together furniture and a début album – you have been busy! Tell me more about Nothing Like Something Happens Anywhere.”

Tom: “It was time – it felt right to move on from the EPs, be more serious, and we were pretty keen with the songs we had written. The album only has the one old track on it – it’s from the original demo. It felt right not to redo what we’d done before, but it was hard work though.”

Joe: “We did enjoy creating it and once you’ve been in a band and in a studio it’s hard to want to do anything else – even the playing in tiny rooms with no one there, the videos and everything.”

Tom: “Most of us like to think this is something of a starting point, but if the fun goes away, who knows?”

Ric: “It is important that we don’t just focus on the band, you can’t force creativity, it has to come about naturally.”

Tom: “It should be something where you have no choice, that you just have to do it, a case of you don’t want to write but you just need too, like you can’t fight it.”

Louder Than War: “Creativity wise, the cover to Nothing Like Something Happens Anywhere was a photo taken by you right?”

Adam: “Yes I was going to the train every day to Leeds and I became obsessed by this building they were demolishing. I kept seeing it and eventually I took a photo on what happened to be a really bright sunny day and the guys were okay to using it.” 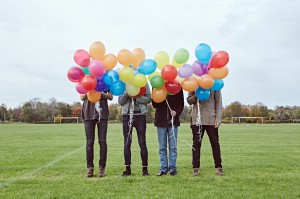 Louder Than War: “Your videos are very creative too.”

Joe: “Our videos get us into lots of trouble!”

Tom: “Fabio r Younnis is responsible for the videos, he is great at putting together videos for no budget and in no time. Nowadays it’s a given that people don’t really watch videos more than a couple of times, so you might as well go all out.”

Ric: “Taste was actually really tough, I just kept having more and more and more milk poured over my head, it was grim, you can see the pain on my face by the end of the video!”

Joe: “I think we all were suffering by the end of it!”

Adam: “We got a lot of hate for the Ennui video, mostly from the Daily Mail, some of the comments were tough such as ‘You are what’s wrong with society’ and ‘Your promoting violence for your generation’.”

Tom: “We all really do love Pat Sharp, I mean, I’ve watched him on TV since I was 6 years old … and Dave Benson Phillips was to expensive.”

Joe: “The fact we were able to piss off the Daily Mail is not a bad thing!”

Adam: “I admit I did buy it just once for a free Simply Red album.”

Ric: “We have very eclectic tastes.”

Louder Than War: “Taste is a useful gauge: let’s say if Nothing Like Something Happens Anywhere was a biscuit what biscuit would it be?” 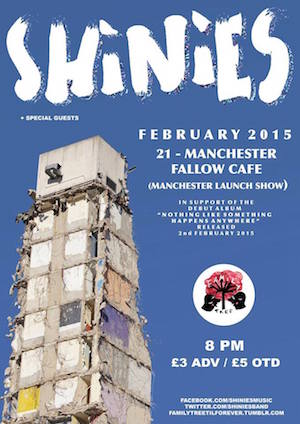 The Shinies debut album Like Something Happens Anywhere is out now on Dirty Bingo Records available in CD and vinyl formats and the download version is available on iTunes.

The band currently have three upcoming live dates in February:

Up to date news about the band can be found on their Facebook, twitter (@SHINIESband) and Tumblr.