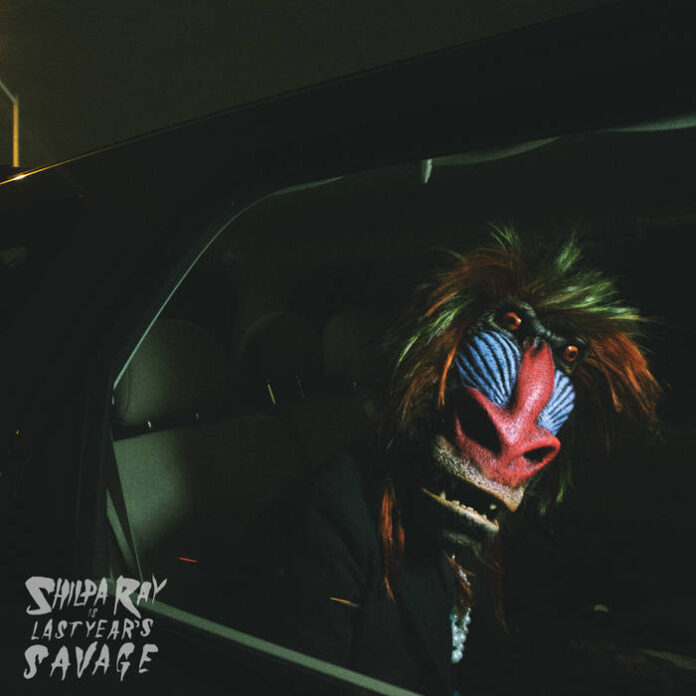 Nick Cave sings her praises and we’re that “…just about every musician in New York  City who doesn’t hate her, loves her.”  She sings about sex, death, bodily functions and betrayal (not necessarily in that order). Ged Babey gets gradually more and more obsessed with Shilpa Ray.

“Nobody wants to be an artist’s artist”, complains Shilpa Ray in her press release, which also describes her as being… “…armed only with an incomparable voice and a harmonium”. Well, she does have a backing band on this, her debut album, too, which may or may not be her erstwhile band the Happy Hookers.

She is an enigma is Shilpa Ray. Is that her real name? Is she a solo artiste or a band? It doesn’t really matter because this is an amazing album… which I admit, takes a few listens to become obsessed and totally infatuated with. It’s totally New York and cinematic sounding, yet it’s also intimate, uniquely bewitching and beautifully flawed.

In my usual amateurish way I have to use comparisons to give you an idea of what Shilpa Ray is-stroke-are like. But it’s hard. There is no one like her. Nico was the last female artiste I know of who used a harmonium and the only other one is Ivor Cutler! Add in the exotica & narcotica of New York and all I can say is listen to…

…and boil them down to their essence and that’s what Shilpa Ray the band do; literate, sardonic, witty and wise New York pop songs about life, death, sex and derangement of the senses. In a post-feminist, post-irony style. Kinda.

Before I’d heard the album I read a really pretentious review on another rival music website which almost put me off wanting to hear it. (Which strangely is the worst thing anyone has ever said about one of my reviews!) The subjects of the songs are conundrums for the most part and as Shilpa sings in one of them  “I don’t know  what the fuck they are sayin'”. I know they have a soulful-sounding detachment and are funny and cool. And that’s good enough for me.

Johnny Thunders Fantasy Space Camp is the song that attracted me to the album and it’s arguably the standout track, being the most upbeat, catchy and funny. It both mocks and celebrates the myth of the junkie artist. The narrator sits back at home with her cats eating cream-buns ending up with “flesh-eating cats and diabetes” which, in her New York drawl, I misheard initially as “die of VD” rather than diabetes!

Shilpa’s voice is one of those Winehouse-ish honey-dripping-off-a-spoon drawls, part Country, part Jazz, and she could sing names out of a telephone directory and they’d sound sensuous and trouser-stirring. But her lyrics are even more appealing, surreal at times and bizarre yet poetic at others.

“If I broke your spine, would you hold my hand…”  is an example of her dark romanticism. As is… “Let’s hang ourselves from the traffic lights…”. The titles too, like Pop Song for Euthanasia, Sanitary I-pad are useful pointers to the American Gothic going on in these songs.

In UK ‘pop-cultural circles’ we know the name “Shilpa” is of Asian descent thanks to Bollywood actress Shilpa Shetty’s appearance on Big Brother, but Shilpa Ray’s ethnic origins are of no real relevance to her music except for the fact that (and this bit is nicked from the ‘net…)

“Ray grew up in a household that forbade Western music, so the Indian harmonium became her instrument. The wheezing, organ-like tones make her songs sound out-of-time, like something so old it’s completely new again.”

The song which opens the album, Burning Bride, is menacing and dreamy, threading the old Hindu practice of bride-burning with her own feminism. Her singing voice and accent gives away nothing about her ethnicity. She is just one of New York’s cultural melting pop. At times her voice reminds me of Ronnie Spector’s ( my favourite female voice) and is just as instantly recognisable and God-given.

The video to Nocturnal Emissions is exceptionally weird. We quote…

The idea for this video was “conceived” during the Todd Akin controversy. Ray posed the question, “What would the conversation be like if we were discussing male reproductive rights?” on Facebook, to which her friend, and fellow musician, Michael Leviton replied: “Every time a man ejaculates and fails to conceive, he’s killing millions of sperm which are living organisms.” If you were to take the ludicrous conservative ideas about abortion and birth control and apply them to men, then every sperm lost would be a life lost.

If you’re not convinced or at least intrigued by now then you won’t be and I’ve been wasting valuable keystrokes.

Shilpa Ray joins a cool-as-fuck roll call of Rays: Man Ray – Sister Ray – Voodoo Ray – Mr Ray – Johnnie Ray – Ted Ray, and she’s the motherfuckin’ coolest. And she knows it. Why else would she tweet under the name @shilparayisgod? Cool.

All words Ged Babey whose author profile is here. If you enjoy Ged’s work and have cash to spare please donate if you can to the Jess Hensford Appeal. Thank you.