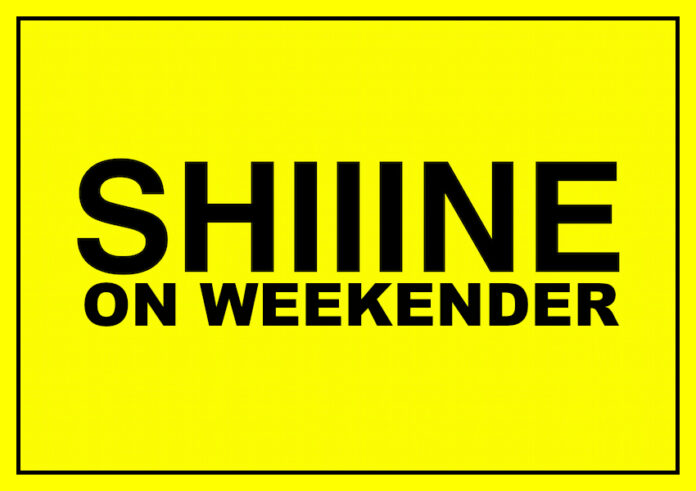 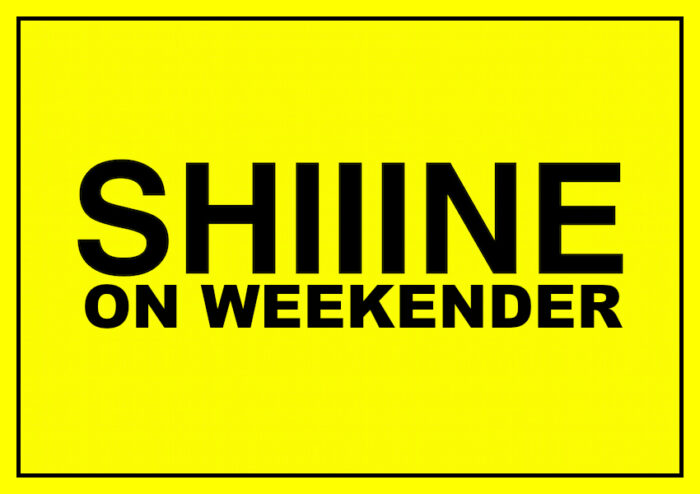 Shiiine On Weekender is the new festival on the block one that promises a celebration of indie and dance music from the late 1980s and early 1990s (and beyond) by bringing together the artists that created a golden period in popular culture when clubbers and gig goers came together in what seemed like a glorious decade long party.

In a fit of bitter tears at losing out on Glastonbury tickets October 2014 and a furious internet hunt for ‘something else’: Stumbling across Shiiine Weekender for which a good number of acts had been announced and with a fortune favours the brave belief it was booked. Over the next 12 months periodically bursts of excitement as new names were added and eventually in a last minute flurry (having been side-lined by The Stone Roses announcement on the Monday) bags were packed the night before the long journey to Somerset.
Arriving prior to check-in we were able to avoid any traffic delays and the inevitable queue for apartment allocations and wrist bands: The staff were not only speedy but knowledge and helpful – seriously faultless. So unpacked, fed and ready to enjoy the delights of which there were plenty – in truth so many that this would be a ten-thousand-word review and nobodies got time for that so here are the in brief excerpts from the Shiiine On Diary.

Considering the event, the Inspiral Carperts did not draw entirely from their way back in the day catalogue: Spitfire, You’re So Good For Me and Let You Down all from last year’s eponymous album. However, it is the sounds of 1990’s Life that produce the crowd bright-eyed and grinning to dance about as Clint Boon’s feverishly whirling Farfisa organ dominated. Stephen Holt’s voice has to date delivered proclamation’s as much as harmonies but here tonight there is something more melancholy and sing-song in his melodies and it resonates well standing in front of the speakers. Encoring with Saturn 5 seems tailor made for the nostalgic thick air at Shiiine On, “All the things you ever represented to me Take me once more, take me to heaven again.”

• There was Angel Delight for pudding, strawberry flavour, it was extra tasty as someone else was washing up.
• Decked out, to begin with, in what had to be a stifling faux fur Space front man Tommy Scott along with original member Franny Griffiths on keyboards, 2011 additions Phil Hartley and Allan Jones on bass and drums respectively – delivered a truly smooth set full of glossy neo-psychedelic indie gems: expectably Female of the Species and Neighbourhood had the Shiiine On crowd singing along and had even those new to the band were bouncing and cheering. Space will be releasing their new album Strange World in March 2016.
• The Farm offered a solid well-constructed mix of tracks Peter Hooton’s reserved performance was in polar opposites to an excitable crowd. It is surprising that many of their tracks while of their time do resonate strongly with issues still abound today: a fact not lost on the band themselves. The set included an unexpected cover of The Clash’s Bank Robber as well as the bands biggest hit’s Stepping Stone and All Together Now when the audience went all out to fill the Butlin’s Arena with their voices.

A cornucopia of sonic delights started off a busy Saturday at Shiiine On: The Winachi Tribe kick started events on the Arena stage with a performance of the very highest quality. Providing a funky diverse mix of indie, soul and groove that is so smoothly infectious it would melt the coldest of heart and have the most rhythmically challenged toe tapping in time. The five strong Tribe: vocalist Liam Croker, guitarist Jamie Mcgregor, bassist Richie Rich, percussionist Inder Goldfinger, keyboardist Antony Egerton and drummer Sam Tushingham looked right at home on the Shiiine On stage. They filled the space with such warmth they drew in more and more people from the fringes leaving their new audience truly won over and cheering for more. The Winachi Tribes current tour continues through November Leicester, Nottingham, Aberdeen and Sheffield: Full details and ticket links can be found on the bands official website. The most faithful sound and atmospheric replication you’d be fortunate to experience The Clone Roses reputation has preceded them and has the Club Madchester’s Reds Stage packed out a good 40 minutes before their due on stage. There are no surprises here and none are required as The Clones run through The Roses Heaton Park set on 2012 without one dodgy note. The pack in the Shiiine On audience sang along, danced and screamed to the last note, security was on hand and on the ball for a couple of eager attempts at stage crashing both swiftly derailed, the band finishing to a genuine and very rapturous applause as they took stage front for a bow.

• Popped into check out Pete McKee’s on site shop a bright and thoughtfully set up space that had plenty of ohh-ing, ahh-ing and furiously checking of available funds. This end result of my visit leaving with a couple of filled penguin adorned carrier bags and a big grin.
• Eton Mess was top pick of the deserts.
• The Stereo MC’s must have burnt a billion calories with their mind scrambling energetic stage performance. Rob Birch along with Andrea Bedassie and Verona Davis didn’t let the high energy dip for one second and were rewarded by a very enthusiastic response from the packed Arena throughout their performance.
• Arena Stage headliners the Happy Mondays did just what was expected of them: Bez did the best Bez-ing possible, Rowetta whipped her whips while hitting all those high notes right and Shaun was Shaun of course … but Shaun with a stronger, cleaner and more robust vocal. Has the result of cleaner living had an impact on Mr Ryder’s voice? The Mondays et al provide a well-constructed, concise and perfectly played show, all the hits and bits that stir those teenage senses: made one slightly misty eyed for the shambolic shenanigans of the past…just for a few moments mind.

The effervescent Miles Hunt is just the tonic for any lingering festival fatigue: his exuberance, bon viveur persona is only equal to his impressive lack of ageing, this really could be 1988 all over again. He opened his Shiiine On set with Red Berry Joy Town it didn’t cross my mind until Miles informed us that The Wonder Stuff (for the sake of argument The Wonder Stuff is Miles and where Miles is there is there is The Wonder Stuff) has been serving up their wondrous catchy punk rock pop songs full of bitterness, snarly attitude and self-deprecating incisiveness for 30 years. There is a good showing from the first two albums the one’s that sound tracked our transition years and created the everlasting love of The Stuffies and as we blister through It’s Yer Money I’m After Baby, Give Give Give Me More More More, Who Wants to be a Disco King and Golden Green it is very noticeable just how incredibly fresh and vibrant each one still is there is not a drop of stale pop around. The Wonder Stuff have always stood for tenacity, optimism and a bit of healthy wrath and after 30 years it fills you heart to see that’s not changed one bit.

• Less than 4 hours sleep for the past three days finally took its toll at Shiiine On. While the spirit was willing the body was not and a brief r and r wallow meant missing Stella Grundy’s The Rise and Fall of a Northern Star show: a semi biographical dramatically inventive ironic parody of which there has been nothing but good things said and reports of the Shiiine grapevine was that once again it was nothing less than ‘brilliant’: I chastise the body for its limitations once again. Even though I didn’t catch the performance I couldn’t miss giving this a mention due to the amount of positive feedback.
• Having got over excited at the desserts – combined Eton Mess with Angel Delight: Not wise the result was overkill.
• Catching the end of CUD and hoping they’d repeat the performance it looked like a ball.
• Taking the prize for most guitar changes at Shiiine On is David Gedge – he switches from one to another, snaps strings taking on a replacement or repaired instrument for each song (his guitar tech gets all the gold stars for her on point diligence). There has always been something appealing beautiful about Gedge’s voices which is both tenderly sweet yet raw and anguished. It works its way around lyrics themed on love and sex – the unrequited and the desperately wanted with something confident and knowing. Just how good The Wedding Present are – had faded somewhat in my mind so I throw nothing but kisses to Shiiine On for reminding me I love the bones of these tracks played tonight and I won’t leave it so long to visit them ago and kudos for yet another comedy moment goes to the gent in the crowd rocking that apple pie above their head throughout Kennedy.

And so it is over Shiiine On 01 a festival full of music, giggles and unexpected discoveries that indeed experienced more a little rain however provided a friendly, safe and dry place to lay excitable heads. Shiiine On as a festival didn’t just try to meet expectations but went above and beyond to deliver in all categories: from the artists booked, the great sound and stage systems to the restaurant, site and security staff each and every one of you is a rock star and we thank you all. Glastonbury pfft you can keep it.

All words and photos by Katie Clare. More writing by Katie on Louder Than War can be found at her author’s archive. She can also be found on Twitter where she uses the handle @tokyo_katie.