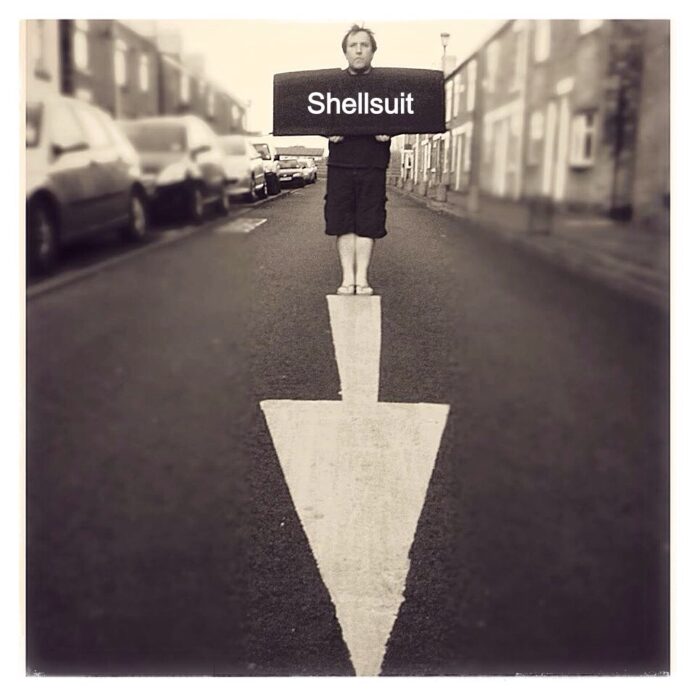 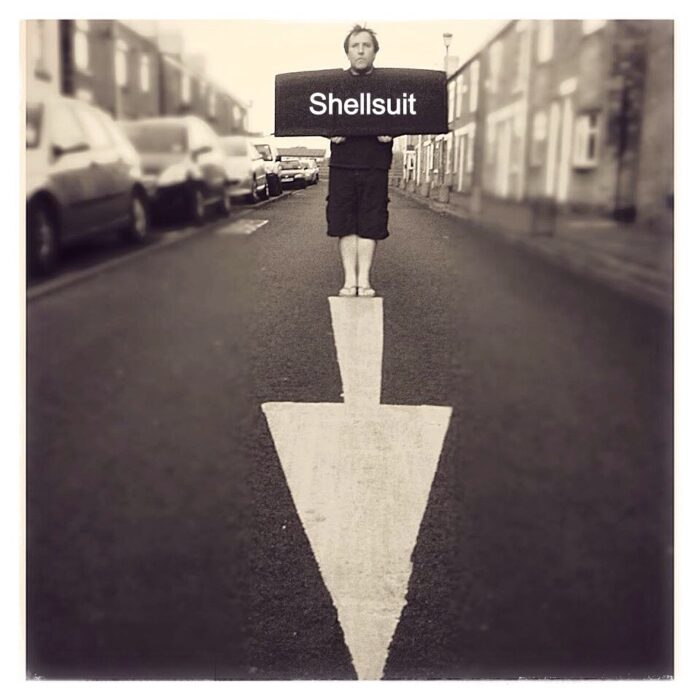 A Liverpool band by the name of Shellsuit. Shouldn’t work, should it? It conjures up all manner of archaic caricatures and simulacrums; curly hair, moustaches, choruses of ‘calm down, calm down’,  the sketches of Harry Enfield & Hale and Pace turned up to eleven, brought to new life in 3D and projected to a CGI-animated 21st century audience. Fear not, dear reader, this is nothing but a false flag operation. You see, this motley crew of two ex-postmen from Walton Vale and a backing band know their surroundings as well as a recalcitrant dog knows which parts of its anatomy to lick before giving the owner a sly kiss on the face. Something’s rotten at the heart of the Big Society, very rotten indeed, and they’ll be damned if they’re gonna take a back seat when it comes to relaying this to the masses. Enter Shellsuit.

Opener ‘Death Or Bongo’ sets the tone of the night immaculately, a deceptively groovy, foot-tapping little number which reeks of lo-fi indie charm. Hang on a minute though, what’s he just said? “You’re such a big shot now, since you were kidnapped and tortured.” Not what one was expecting. Although similar lyrical territory has been covered several times before, a line like this has considerably more visceral power when thrown into such a bouncy, relatively uplifting tune like this. The rest of the evening is highly political, largely good humoured and explosively energetic, tracks like ‘Iraqis In Shellsuits’ highlighting hypocritical attitudes towards immigration, pointing out the Irish heritage of many Merseyside residents, and some blistering attacks on the Thatcher years and the modern day ‘Victorianism’ we find ourselves disastrously hurtling towards in the present day. It’s exciting stuff; the shaven headed, red tonic suit jacket wearing frontman burning like a fire and brimstone Trade Union preacher, ably assisted by the long haired bearded bassist, the Perry Boy saxophonist and the sultry tones of a guest female backing singer. This is what the UK underground gigs of the Eighties must have felt like, the smouldering soul of The Redskins, the cartoonish shenanigans of The Three Johns, the haunted classicism of The Pale Fountains are all invoked in these thrillingly intimate surroundings. A travelling contingent of fans from South Wales are namechecked, a group from County Road playfully insulted, and appropriately the whole thing ends with a mass stage invasion. How else?

In the manner of fellow latter day chroniclers of social decay and unruly decadence, from the twisted minds that brought you the likes of Sleaford Mods, Fat White Family and The Lovely Eggs, Shellsuit are part of a modern musical movement which refuses to stand back and let the bullshit roll. A kind of ‘Gritpop’, perhaps; the Cool Britannia years regurgitated several times over by a flea-ridden feral cat, the produce of a decade grilled by its own vanity and creating an identity of its own, a channelling voice for uncertain times. Love’em or loathe ’em, once you’ve seen them live you won’t forget Shellsuit in a hurry. That’s a promise.