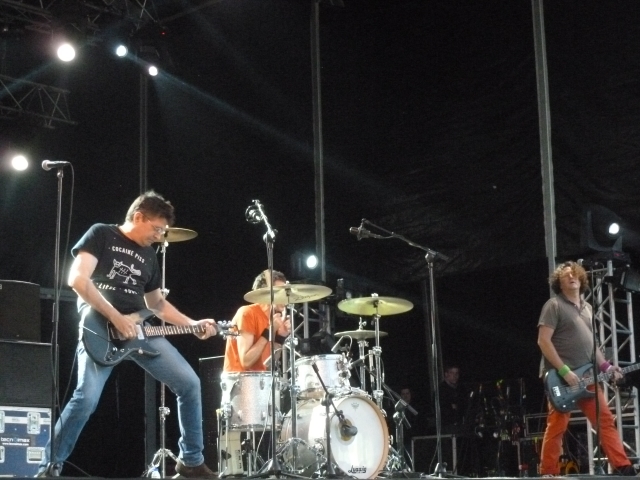 Great news from the frontline±!

“We just did a rehearsal weekend; we’ve got eight or nine new songs that we’ve been working on,” Albini tells Exclaim! “We’ve been playing three of them on recent tours the last couple of years. We’ll probably sprinkle the remainder [into] live sets over the next year or so. I’m terrible at predicting when we will make another record. I know we have the capacity to make another record and so it’ll happen eventually.”

He adds, “We’ve already done some recording of the new material, and early indications are that we’re still happy with it all. We like to record our music in an early iteration so that we get to hear the ideas in a realized form, and then we also like to let those songs evolve over live sets for a while.

“So, often they won’t get recorded for a few years after we’ve written them, because the practice of playing them can change the way we want them to sound. Sometimes we’ll record them very early to get a snapshot of them, and then record them again after they’ve matured on tour. It’s kind of an even split, as to which ones have been better over the years.”

In their own way, Shellac are rather prolific, and in their earliest years, they were particularly productive, officially releasing all manner of singles and unique recordings beyond their proper albums, both on and off of their home label, Touch and Go Records.

There was a 1995 double-split 7-inch comp of AC/DC covers/inspired music (Shellac did a version of “Jailbreak”) or another split-single released in 2000 that accompanied a Dutch comic book by Barbara Stok called Sex, Death, and Strips. With no plans for more pressings, unless you could track down second-hand copies of such singles, you might never hear these songs. On the face of it, the members of Shellac seemed fine with this and have never really revisited these releases. That is, until now.

“There’s a Peel Sessions record being released that is all our collected [late BBC radio pioneer John] Peel sessions and there’s a compilation album of all our early singles that are now becoming hard to find,” Albini reveals. “We’ve been working on both of those records in the background for a while now.

“One of the principles of the band is that we didn’t ever want to do anything where we would feel like we were milking our audience. We didn’t want to repackage or reissue stuff and sell it again for reasons that weren’t transparent and obviously necessary. One of the ways we can do that is by making sure our stuff stays in print all of the time. The problem with that is that the odds and ends wound up on compilation albums, or on singles on labels that went under, or are one-off special releases for things. A lot of that stuff just isn’t available and we started to feel bad that we didn’t do something to make it available.”

When asked if, say, the aforementioned AC/DC cover might be included on this Shellac collection, Albini tentatively says, “Yes,” but then adds, “For the moment.”

“We haven’t actually done the final cut for any of this. There’s a possibility that somebody will say, ‘Y’know, I’m not into this one; let’s skip that.’ I would like it to be comprehensive, I think it likely will be comprehensive, but the smartest thing to do is wait until it’s done and then I’ll know,” he chuckles.

Of course the white whale for Shellac record collectors remains the 1997 instrumental LP, The Futurist, a.k.a. the “Friends of Shellac Record.” Consisting of music originally composed for the Montreal dance troupe La La La Human Steps, Shellac pressed 779 copies of this album with every single intended recipient’s name printed on the cover and each individual’s name circled in silver ink on their personal copy (among them, members of Canadian bands like Sloan, Shadowy Men on a Shadowy Planet, the Sadies and Jale).

When The Futurist rarely comes up for sale on the computer, it’s routinely listed for hundreds and hundreds of dollars, but Albini says that despite some archival activity among his comrades in Shellac, The Futurist won’t be leaving the past.

“No, we made that record for our friends and we’re happy with that,” he says simply.