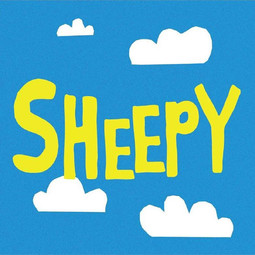 I’ve spent the last couple of days trying to decide; Sheepy – either an utterly crap or utterly brilliant name for a band, each point I considered actually countered itself and left me no nearer a decision…the name is so stand alone, its meaningless, it offers no clues, no pointers, but then I like that, here we have a band without desire to be pigeon-holed, a band that by name alone fails to define its genre. The band logo is dire, possibly ‘designed’ and I use the term loosely by a 3yr old – but then that works perfectly, a logo by definition is to aid and promote instant public recognition; it certainly does that. The sleeve of this their self-titled debut is singularly the worst sleeve I have seen in a good long while, ignoring the quartet of band images within the booklet the design process must have taken moments, a simple search on Google images and voila! However, for the same reasons that the name and logo work the sleeve works also – it forces you to abandon any preconceptions, to be receptive solely to the music, music composed by the Liverpool based trio that make up Sheepy.

A brief history lesson; Sheepy AKA Luke Jones apparently took up the guitar aged just 3yrs, and in the ensuing 24yrs recorded fifteen albums in his Liverpool bedroom before being spotted by London label Blang Records playing a pirate radio festival in Ireland; he was signed immediately and went on in the Sheepy guise to release three singles; the third ‘Another Day’ was played thirteen times on BBC 6music, including seven spins from Steve Lamacq alone – in the meantime Luke recruited school friend Ollie Phillips on drums and Irishman Villy Raze (ex Dead Class) on bass, the result being this quintessentially English sounding release; having listened to this a good few times trying to find reference points, similarities and the like I have come up with a hotchpotch of names, some dating back to the 60’s, others more recent – I noted down The Kinks, Buzzcocks, The Undertones, The La’s/Brit/Indie pop, perhaps TFC, hints of psychedelia and even The Ramones…

Take opener ‘Wrongun’…it instantly grabs you and throws you back to the early days of pop-punk Buzzcocks, then adds the refinement of swooning harmonies – a non-stop, melodic rush; simple but wickedly effective instrumentation leading us into -Ket Party’ the bitter sweet vocal refrain “You lose a limb or two” – Sheepy sound like everybody, but somehow manage to reside in their own warped rock ‘n roll bubble. ‘These Clothes’ a bass driven high energy power-pop charge – an analogy for honesty as Luke and an unknown partner reveal themselves; whilst ‘Don’t Know Much’ is a collision of Kinks infused pop mixed with Glasgow twee creating an ideal summer vibe, as Luke expresses confusion with the world around him…’Another Day’ begins with a real lo-fi garagey guitar riff before morphing into a real melodic punk belter – it seems effortless, though I suppose with so many albums behind him Jones has certainly learnt his craft.

Stand out track, certainly for me is ‘Little Chatterbox’ a sub two minute achingly gorgeous amphetamine rush, structured around a deceptively simple looping riff and strident drum pattern that will appeal to anyone who’s own musical education began post summer 76’ and then ‘Warwick Hunt’ – a silly lyric, though when repeated in a typical harsh scouse accent…well you get the idea, but yet again Sheepy have crafted a slice of engaging artistic pop that will leave you grinning inanely, similarly with ‘Hugs & Kisses’ effortless melody and dangerously catchy distorted guitars as Luke cajoles “You’re not Sid Vicious/ You want hugs & kisses” in an almost whimsical delivery.

The entire album is a kaleidoscopic mix of pops finest reference points, blended with humour and self-depravation; Sheepy are clearly enjoying themselves, how else would you explain the video for ‘These Clothes’?

I suggested this is an ‘English sounding’ album; I need to clarify that everything about this album is English – nothing to do with chest beating or xenophobia, it’s the very quirkiness of the album, the crap sleeve etc; I can’t imagine a US act and label putting this record out in its current form – the focus group or demographic analysis panel wouldn’t have sanctioned it; Sheepy have crafted a melodic, hook laden classic – a slice of real independence, so adverse and unconcerned as to what is current, to what is gracing the pages of the NME.

Sheepy are singularly focussed on their own sound, clearly they have an ear for a great pop hook; they are determined to forge their own path, and on the evidence of this debut album release the first few stones have been set, and I’m pretty sure they don’t care what I think about the name or logo.