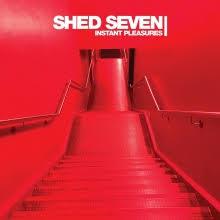 Emperor Hadrian, William the Conquerer, Guy Fawkes. All names who have history aligned within the walls of York, but since 1990 its arguably greatest export has been Britpop and indie knights Shed Seven. Since the release of Truth Be Told in 2001, things have been most unwelcomingly quiet from the band – albeit live performances continue to win favour with steadfast fans of the Sheds.

Wait no more – fifth album Instant Pleasures is released on 10 November, produced by Martin Glover aka Youth from Killing Joke, and heralds the band’s largest ever tour with over 50,000 tickets across the UK sold prior to a single trademark somersault over his drumkit by drummer Alan Leach.

Debut single and album opener Room In My House is draped in the outfit’s energetic guitars and theatrical vocal delivery. It is that energy which fellow Britpop bands such as The Bluetones and Dodgy have struggled to capture during their live performances, and with space permitted for the music to breathe between Rick Witter’s anthemic chorus, this is a formidable, swaggering return by Shed Seven. Verses on Nothing To Live Down hint that the band have made peace between themselves, and not even recent accusations that former One Direction star Harry Styles ripped off their 1994 single Ocean Pie have embittered them or their focus to make catchy pop music.

Witter’s rousing vocal rings throughout the record and the reflective tone on songs such as It’s Not Easy, Better Days and Hang On To Yourself never veer from the sanguine, positive timbre which the band is oft-associated with. Inclusion of gospel backing vocals, bluesy pianos, tambourines and horns all build on the solid classic rock prototype designed by the Rolling Stones (Not least, a specimen taken from the Stones’ Sympathy For The Devil on the latter track) and exploited by the Sheds during the 1990s.

At points however, less is – well, less on the IP album. The simple ABAB rhyming structure hobbles on those Yorkshire cobbles during tracks such as Victoria, with lazy lyrics such as “I think I adore ya, Victoria” thrown together in a tepid attempt at romance. Likewise, the album trails off three-quarters into the record on songs such as People Will Talk. Indeed, they will.

For the album’s zenith though, turn ears and disco-down-dancing feet to Enemies & Friends. Electronic waves, pulsating synth, rousing guitars, and a fresh vibe interspersed with classic Sheds-stylings and this could be a most useful single deserving of BBC Radio 6 Music airplay. As an acclaimed guitar-led band, the refreshing synthesised sounds taken by producer Youth offers the listener hope that new music can equal previous success, or surpass it. The strained-guitar reverb and Verve-esque strings on album closer Invincible is another promising piece of work which works impressively under Witter’s melodic chanting. ‘You’re not that easy to forget’, he sings – and neither are Shed Seven it would appear.

Although there is a perceptible unbalance between staying loyal to their Britpop roots and blossoming into areas of unfamiliar territory, this is a record which will be embraced by the band’s original parish. But like any well-built Shed, there are tools not used often enough which could vastly improve the garden.

Instant Pleasures will be available digitally, heavy weight vinyl, limited red vinyl, cassette, CD and a limited deluxe 2 CD featuring new tracks, demos and remixes. Shed Seven will also be releasing a 7” Box Set which will contain seven coloured 7”s and one polaroid which will be unique to each box. Limited to 777 boxes, available exclusively via their artist store.

Watch the official video for It’s Not Easy here:

Find out more about Shed Seven at their website.