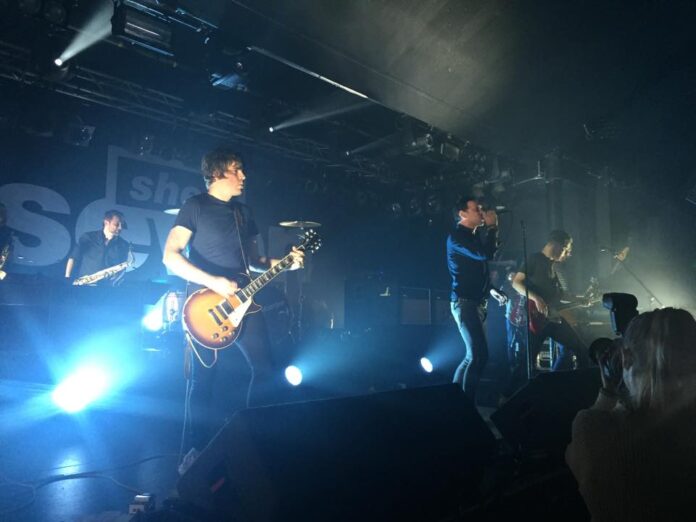 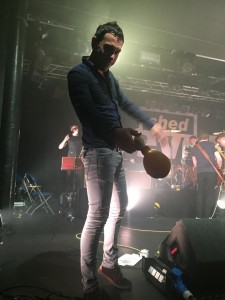 Shed Seven’s Shedcember tours have become a festive staple for many and last night they discoed down at Rock City in Nottingham with supports Inspiral Carpets. LTW editor Sarah Lay reports from the front line.

Anthropologists studying isolated tribes in the remotest corners of the world have found many things about humanity and the traits we share, the cultures we build as a species. And while they have made notes from the foothills of Peru and in the jungle of Timbuktu about how us people like to raise our voices together in song, about how singing together bonds us together, they could have just as easily made that observation at Rock City tonight.

Shed Seven roll their greatest hits tour into town and the scattered tribe of Britpop blokes and birds scurries back together, answering their call. As Rick Witter leans toward them from the stage and drawls ‘Let’s all have a massive sing song’ they hold their cans of Red Stripe aloft in salute and raise their voices as one: “I don’t need to be, I need to survive, You’ve got the key, to staying alive.”

And while the years may still lay heavy on the body they fall away from the spirit as with enthusiastic discord the bond is remade, a shared history re-affirmed. Tonight is about singing from the heart, feeling from the memory and knowing that you belong to this tribe of strangers, that you are all bonded together through this era of songs.

It starts with early doors and the shimmering percussion of the Inspiral Carpets. This is the tripping rhythm that resets the beat of your own heart before the organ kicks in and the world spins into a melting vortex of psychedelic colour and sound, pulsing with the brusquely-delivered vocals. It is the sound of Madchester hailed with chants of ‘Boon Army’, it is a band who are deeply adored but not critically revered despite having a recent album of songs more than worthy of standing shoulder-to-shoulder with any of those from their bulging back catalogue of indie anthems.

Tonight they work the crowd well; comeback track You’re So Good For Me is sung back at them as heartily as old favourites She Comes in the Fall, Joe and finally Saturn 5. It may be the swirling keys of Clint Boon that immediately spring to mind when you think of the Inspirals but this is a band that over three decades making music together have become greater than the sum of their parts. Pragmatic but content in their approach they grab your attention with those organ riffs but they keep you coming back with the complex but precision rhythms, the floor-shaking bass lines, the edgy guitar that is the undercurrent that lifts the keys, and those words both of everyday life and dreams of the extraordinary delivered in that northern drawl.

They are a great choice of support for Shed Seven: in the Inspirals we are reminded of the songs we’ve loved for years and that while the ’90s produced an abundance of indie the two tonight are among only a few bands that managed to secure themselves on the soundtrack of our lives as more than one hit wonders. 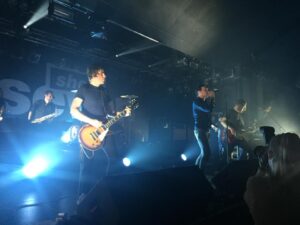 Shed Seven are a band who know this of themselves, are not complacent but confident in the strength of their back catalogue and who have taken a definite decision to exist only as a band that tours those old hits rather than one that chases something new.

Back in the Britpop melee they may have been classed as try-hard fall-short also-rans, finding themselves hailing from the wrong side of the Pennines as Manchester was fetishised as the well-spring of all guitar bands, but as the passage of time has rubbed the industry shine of much of what was churned out during those years Shed Seven have sailed through, still reserved a special place in many musical hearts.

These pre-Christmas runs of gigs have become almost traditional over the last few years with people settling into the sentimentality of the season eager for an extra shot of nostalgia on the side. Everyone knows what they’re here for and save for a changing running order and the occasional addition of a b-side or album track its now a reassuringly familiar selection, expectations set before you walk through the door and firmly met by the performance you get.

Last night’s crowd at Rock City took a hold of Shedcember fully with wave after wave of grinning surfers pushed forward, hands thrown in the air and voices raised as one. The band start us off with the half-chanted, staccato riff of She Left Me on Friday and followed with Casino Girl.

Not for the last time tonight Rick Witter shows how comfortable with the crowd he is, how aware of his own place centre stage, and the earthiness of this band with the way he performs. He still has the moves like Jagger, snake hips swinging as he crouches low then explodes forward thrusting at the frontline with a hand on his crotch. Flanked by the poker-faced Paul Banks, the foot-on-monitor posturing of Tom Gladwin and the unassuming strolled circles of Joe Johnson it’s a front line that caricatures rock and roll while never being anything less than genuine. Behind them Alan Leach’s kit is raised on a dais making it all the easier to see his exuberant style, the laid back but exaggerated movements that create rhythms to which we shimmy, shadow box and po go.

It’s a high energy set when all you’re playing is the hits and you have so many of them. They span the years when the band were actively creating music – from Dolphin, Speakeasy and Ocean Pie, through Where Have You Been Tonight? and Bully Boy, to Disco Down. 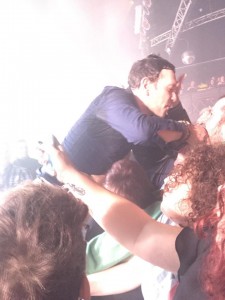 The crowd sing every word – sometimes too eager making the band pull back some of the control with On Standby as the audience repeatedly rush ahead in the pause mid-first line so the band go back and make them wait again. None of it sounds tired, none of it sounds dated. There is little in the way of variation other than the addition of a horn section – all part of the celebrating with simplicity vibe you get on this tour.

The band bring it all to boiling point in the encore as Rick Witter makes his way along the barrier during Getting Better, leaning over to offer the microphone to the frenzied crowd. This is the petit mort, the climax of live music and nostalgia and it satiates us. All that is left is the pillow talk of Chasing Rainbows that delivers us from this festive bunk up, that bonds us one final time with the recognition that things might not be perfect but there is always hope, that even when things are bad having a bloody good sing song to one of your favourite bands can bring great strength.

Shedcember is an unashamed tour de force of nostalgia, a festive indulgence in the indie anthems of our youth. Their songs seem swagger toward you like a drunk with a puffed out-chest fisting for a fight but changing tack at the last minute to embrace you and draw you into the hands aloft sway of a sing-a-long. Yes, full of bravado and guts, sometimes bolshy and for so long underestimated in their ability to lift you with them as they sweep and soar on high. In Shed Seven we have a band who are celebrated as the underdogs of the maligned Britpop era but who are quite happy to live within their legacy, not lazily or lightly churning through their back catalogue but celebrating it with us.

The Inspiral Carpets are profiled in the latest issue of Louder Than War magazine. Pick it up at WHSmiths, independent newsagents or order online.