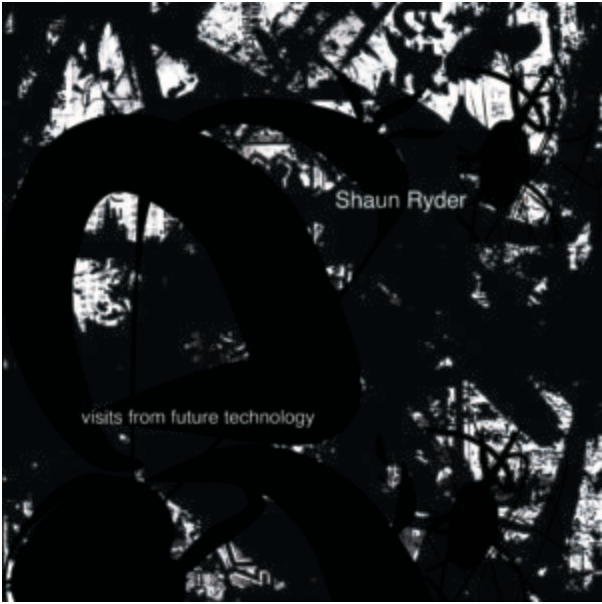 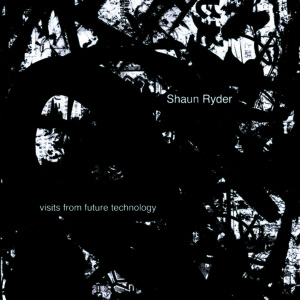 Out on 20th August

Like the discovery of a time capsule buried below ground for aeons, the Poet Laureate of the Dispossessed, Shaun Ryder, sticks a screwdriver into its stiff, crispy lid and unveils to an increasingly expanding, ever-interested demographic of fans the vast galaxy of experiences contained within – making Visits From Future Technology an essential listen for all.

And now this…a new solo album by the anthropomorphic embodiment of a city, Manchester’s mad hatter, the English Lou Reed, who, on his incredible new album, offers up a range of different styles and serves up an array of subject matters that quintessentially twist the melon’s flesh until a melody pops out.

Visits from Future Technology is released on his own SWRX Recordings imprint and produced by Sunny Levine. Started in 2010 in Venice Beach, California, the main single Mumbo Jumbo was pretty much completed during these sessions before Ryder was to partake in I’m A Celebrity.

Mumbo Jumbo, the first single from June, has Ryder exhaling heavily into the mic with that damaged, slanted Manc-rap cadence only he can really execute. It’s classic Ryder, hellraiser and wordsmith, conjuring up magical melodies from the air as though the pop song is a form of sorcery. An attack of that instantly familiar accent breezily bringing the lyrics to life, it prowls and pounces and bounces like some battle between a couple of gunslingers in the middle of a post-apocalyptic spaghetti western sci-fi shoot-out. A jazzy, skanking bass is always on the go.

It quickly crashes into Close The Dam, an absolute album highlight – Massive Attack’s dark, dancefloor equipped mysticism; ominous trip-hop electronics pulsating from within a space where smoke surrounds all and, eventually, consumes. A hole explodes into the floor and Ryder emerges from the earth’s core. Silky, slinky guitars flicker and glisten above odd assortments of feral 808 bleeps and beeps. Jacked Chicago-house sounds erupt into seizures of mechanical laughter.

The coherent and consistent excellence of the tunes is remarkable, impressive even. Lyrically, there’s a lot to take in. As tends to be the case, Ryder is the human sampler; one who keeps delicious turns of phrase and spoonerisms in a white pick ‘n’ mix bag and sprays them onto a canvas as both brutally sincere social commentary and surrealistic experiments with colloquialisms local to Ryder’s encounter with everyday life.

One such example would be Pop Star’s Daughters. Part-accent and part-melody, like as a whisper in the ear whilst also leading this euphoric liturgy from Salford to Zion, it’s a tongue-in-cheek homage to his four daughters. But it’s also a clever, comment on the passing of time and a beautiful, symbolic act as Ryder participates in the slow removal of the armour and bears the naked flesh to the world as a mortal man standing on the edge of the earth with his fly open and a black eye. “As you get older, time goes really quick. The five years you spend from the first year to the fifth year in school, seem like a million, now it goes like that (clicks fingers) in the blink of an eye”. His scars still run deep despite the wounds having scabbed and healed over long ago. A man who didn’t ‘arrive on this world with a set of instructions, just a brain that barely functions‘.

Maybe there’s some kind of unspoken force of hostility working against Shaun to let him have fun but not too much fun – not when dealing with geography teachers as big as Coldplay or safe, staple radio menus from a crass cast of Next models ranging from Kaiser Chiefs, Killers, Keane, etc…

However, the contribution of such royalty from Levine is detectable from the off; the raw, yet equally rich work itself not needing any external input, the honesty and opinion of both Ryder and Levine, bouncing back and forth between each other. As is the case with killer tunes such as Honey Put the Kettle On or Crazy Bitches.

The former shoots fast in a blast of mangled electronic experiments, and burns below a snappy, simplistic ballad of melancholic acoustic guitar and two-piece drum kit action. It’s psychoactive melodrama conflated to lovely, lamenting, poetic anecdotes from the humorous half of the darkness where Mike Leigh hopelessly pours his heart onto the typewriter.

On the latter, hot blobs of buoyant bass dart in and out of view but leave an irreplaceable presence lingering in the mind; the flesh on the fingertips kissing the strings with tough, funk edges dunked in a pot of dayglow paint.

Electric Scales hits like slick, primitive UK glam guitars, all fizzles of glitter as a peacock sachets along a catwalk. Sticky bass limbs emerge from the bubbling jaws of a swamp, shuffling and strutting along a stretch of the street still boiling hot from being freshly tarmacked. Baggy, bluesy chord progressions are considered criminally insane and given electroshock therapy. And although Youth didn’t contribute to this album, the song’s scale soon transforms from Stones to Beatles, by way of otherworldly Orb-tronics and inflatable, radioactive melodies, most likely imaginary but introduce new tastes to the tongue that is utterly alluring.

One such ‘anything’ would be Clubbing Rabbits, which concludes the album. ‘With that, there’s a bit of a metaphor going on there. All my songs have got metaphors going on. The thing is I forget what the fucking metaphor is”.

Shaun is no stranger to the continuous, endless cyclical twists and turns of the industry conveyor belt and all that comes with its ebbs and flows, its ups and downs, its peaks and pits. ”Someone is given a fresh start, and six months later, they’re repeating the exact same thing through bad habits, or whatever, or robbing, or whatever. So it’s sort of all that shit going on. Personally giving a dig at someone”.

Maybe the someone is Shaun himself. Maybe it’s the people, once a firm feature of his everyday existence, but now he is able to rejoice at relinquishing them from his vision.

And he’s all the better for it.