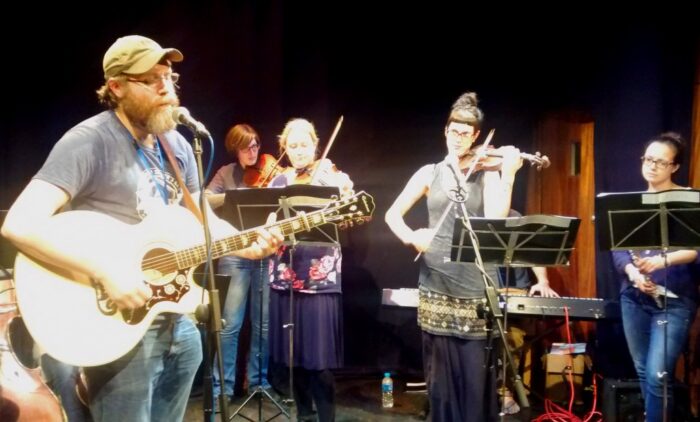 There is a point in tonight’s challenge when Shaun Buswell defies the audience to describe the concept of the ten day orchestra challenge to one person, and notice how difficult it is to do without it sounding “shit”.

Well, I’m going to try and describe it to thousands of you. I can’t promise that I’ll make a good job of it, but at least I would have tried.

Shaun Buswell likes to set himself challenges. In the past he’s created pop up orchestras consisting of total strangers to play at venues such as Shepherds Bush Empire and Glastonbury. His new challenge is the most ambitious yet.

The Ten Day Orchestral Challenge sees Shaun and his friend Erik Nyberg playing a ten day UK tour with each date seeing Shaun try to organize an orchestra of total strangers that can only be assembled if musical members of the public personally get in touch with him, or if they bump into him in the street. The aim is for ten orchestra recruits per night. Tickets for the shows are free, any funds received are through kickstarter and by donation from those that attend the performances, should they deem it worthy. Whatever monies are received will be split between every single orchestra member that plays over the ten days. If the target isn’t reached, they’ll be paid regardless and Shaun will go bankrupt. It’s an astonishing and somewhat risky challenge to undertake, and at the heart of it all is Shaun’s belief in spontaneity, altruism, serendipity.

The first half of the evening is a stand-up/PowerPoint presentation of why the Ten Day Challenge exists, what its aims are and the thoughts behind it. As speakers go, Shaun Buswell is a very charismatic. His explanation and theories on the act of getting up and trying something, and how failure is far from a bad thing are inspiring. In theory, the challenge is already a success as it can’t fail, for by trying to be something different and believing in the power of kindness and music, it’s already won.

After the premise is laid down, it’s time to unveil the orchestra. Birmingham is day four of the challenge and tonight’s orchestra consists of eight strangers, just two shy of the target. A quick tally means that there are six more dates to play with 70 musicians left to find.

The set is made up on the spot with the audience choosing the songs by using a lottery system and a list of 100 songs that have been printed up as score sheets. The set played tonight is eight songs long and consists of one cover The Foo Fighters ‘My Hero’.

As the nervous orchestra prepare to perform, there air is tense. The Cello starts, the violins kick in and Shaun Buswell starts to sing. The result is truly magical. The music is immersive and grabs hold of you in an instant. The creation of sound right in front of your eyes is something truly special. To know the players haven’t heard the material  and like the audience are too hearing it for the first time as they nervously play it is fascinating. The cover version of  ‘My Hero’ had been radically reworked to fit in with what is the base source of Buswell’s recorded sound, acoustic alternative folk, but now bolstered up orchestrally to create something much more majestic.

As the set comes to a close, at least two people within the orchestra are crying with emotion, and whilst that may sound slightly cheesy, at no point does the night feel forced or hammy. The challenge certainly paid off for everyone in the room this evening, and one can only hope that word of mouth spread and Shaun Buswell’s extraordinary 10 day orchestra challenge continues on it’s tour and brings with it much more excitement and magic along the way.

You can find out more about Shaun Buswell’s 10 Day Orchestra Challenge, including options on how to attend or even play in an event at the challenge website and crowdfunding page. Be quick though!

More writing by Christopher Lloyd can be found at his Louder Than War’s author’s archive.