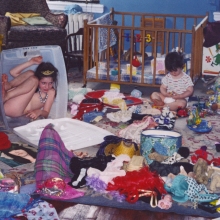 A decade after emerging with intimate songs of heartbreak set to sparse accompaniments, Sharon Van Etten has grown into a very different woman, and a very different artist. Where once she was a wounded but resilient surveyor of romantic breakup, working within a gentle Americana-tinged musical framework (she’s still described in her Allmusic bio as a folk singer), Remind Me Tomorrow introduces listeners to a strong, confident artist who still channels senstitivity but can also turn her hand to anthems carried along on big drums and synthesisers.

In the four years since her last release, the EP I Don’t Want To Let You Down, it’s not just her musical backing that’s changed. She’s grown into an accomplished actress (in two seasons of Netflix series The OA and, as herself, in David Lynch’s Twin Peaks revival), become a soundtrack composer (she scored Katherine Dieckmann’s film Strange Weather), gone back to school (studying for a psychology degree at Brooklyn College in order to become a mental health counsellor) and, most life-changingly of all, become a mother.

There’s still darkness and doubt in her songs – how could there not be for a new mother bringing a baby into today’s uncertain world – but the anxieties of the younger artist are tempered by optimism and hope, courage and confidence. It’s a delicate balance, but one that’s explained by the fact she wrote and recorded much of this album while pregnant with her first child, completing the lyrics while contemplating her newborn baby. It is, above all, a record “about pursuing your passions,” as she puts it.

That passion runs through all its ten songs, from the poignant piano-led opener I Told You Everything, in which she’s confiding secrets to a stranger in a bar and curiously, yet typically, does not reveal the secret itself; merely the reaction to it:  “I told you everything. You said: ‘Holy shit – you almost died’.” One of the enduring attractions of Van Etten’s songwriting is this ability to express her own emotions while leaving enough space for the listener to interpret and impose their own meaning. It’s a special gift.

Another is her ear for a tune, and, musically, this album is a revelation.  Van Etten gave her original demos to producer John Congleton, who has worked with everyone from Lana Del Ray to Angel Olsen and St Vincent, giving instructions to make them more “energetic-upbeat” than her signature sound of “minimal-meditative,” offering him as reference points Portishead, Suicide and Nick Cave’s Skeleton Tree (she opened for him on tour in 2013 and found love with her then-drummer/now-manager-and-husband Zeke Hutchins).

The familiar subject matter of her lyrics – the hazards of love – remains at the core of her songs and she still favours the slow build, but musically Remind Me Tomorrow takes us into new territory, with syncopated beats and squelchy synths and all manner of fuzzy noises. Little surprise to learn that Van Etten instructed he producer that she “didn’t want it to be pretty.”

Putting down the guitar she had used when writing her first film score, for Strange Weather (with Ry Cooder as her reference), she cleared her mind by using the synthesizer and organ of actor-musician Michael Cera, who shares her studio, to reimagine the simple piano demos she had made. Where once there were wistful echoes of folk and country, now piano keys churn, intense synths burble amid deep drones, a propulsive organ, a distorted harmonium and distinctive sharp drums that scream of 1980s soft rock.

Never more so than on standout track Seventeen, which marries a poignant lyric about looking back on her teenage self through the prism of New York gentrification to a thumping tune whose urgent drum beats echo Springsteen’s Dancing In The Dark, before dissolving into delicious distortion. It’s interesting to learn that perhaps the most different-sounding song of all, first single Comeback Kid, began life as an unadorned piano ballad before evolving into the menacing electronic anthem it has become, as did Jupiter 4, named after the synthesiser upon which it is played.

Repeated plays of Remind Me Tomorrow strip away the dense layers to reveal further lyrical pleasures for an artist whose newfound happiness in family life is tempered by inevitable doubts about the dangerous world her son has entered. Lyrically, she has never been sharper: the road song Malibu, a love letter to her husband set in the beach community of Los Angeles, where the album was recorded – and to where she is now relocating with her family – is the lightest and most straightforwardly romantic she has ever written: “We held hands as we passed the truck / Just a couple of dudes who don’t give a fuck”. In the past the song might have led to a romantically disappointing conclusion; this time it’s different: “I walked in the door / The Black Crowes playing as he cleaned the floor / I thought I couldn’t love him any more.”

Remind Me Tomorrow is nothing short of a masterpiece, bringing a fresh dimension to what was already a brilliant career, and Sharon Van Etten has evolved over the course of a decade from a folky cult figure into a bona fide rock star: proof that good things really do happen to those who wait. She deserves nothing less.