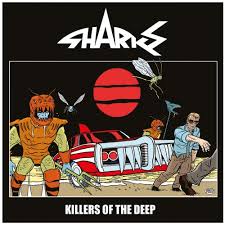 Sharks: Killers Of The Deep

The legendary seventies combo are back with a new album and are currently touring the UK and putting together a feature documentary on the band.

Sharks tale is one of struggles against adversity. Their original lifespan was blighted by accidents, an ever changing line-up and so-so support from their record label. Formed in 1972 and fronted by singer Steve Parsons, the band featured some heavyweight talent in its ranks with studio guitar ace Chris Spedding and former Free bass player Andy Fraser. Labelled a supergroup by the music press, the band already had a lot of weight on their shoulders even before they had started to put one note to vinyl. They lived up to the hype and recorded an excellent debut. Far from featuring the usual instrumental excesses from the period, the debut album “First Water” benefits greatly from the economical playing of Fraser and Spedding (both well renowned for playing just what is needed for a song) and Parsons soulful lead vocals. Fraser’s enthusiasm wavered after the band suffered a car accident while touring “First Water” and it was a new line-up that recorded the follow-up “Jab It In Yore Eye”, again a great record but band dissension plus Island Records pulling the plug after hearing the tracks of their third album meant that they had no choice but to break up in the fall of 1974.

The band reunited in the mid nineties with Parsons, Spedding and keyboardist Nick Judd from the seventies line-up for an album and sporadic live dates but it is the passing of original bass player Andy Fraser in 2015 that seems to have convinced Parsons and Spedding that the band was something special and to give it another go. Regular gigs over London and the UK happened over 2015-2016 and finally a new album, Killers Of The Deep was issued in February 2017. The core of the seventies line-up is still there with Parsons on vocals, Spedding on guitar and Judd on keyboards, joining them on drums is Paul Cook (Sex Pistols, The Professionals, Edwyn Collins) and Japanese bass player Tosh Ogawa. The band rocks with aplomb on opener “Ya Ya Pop” and grooves with authority on “The Complete History Of Soul Music”. Lead single “One Last Thrill” would deserve to be a hit with its heady chorus while Spedding’s guitar tone works wonders on “Red, Red, Red” and “Can’t Get The Devil”. The best track on the album turns out be the title track of their long lost third album with some excellent keyboard work from Nick Judd and a spot on vocal performance by Parsons.

Sharks have launched a Pledge campaign to raise funds for a documentary on their history. They will also be playing at The Lexington in London on Sunday the 24th of September. It promises to be a special show with Chris Spedding and Steve Parsons being interviewed by writer Chris Salewicz followed by an acoustic set and finally a full band performance.