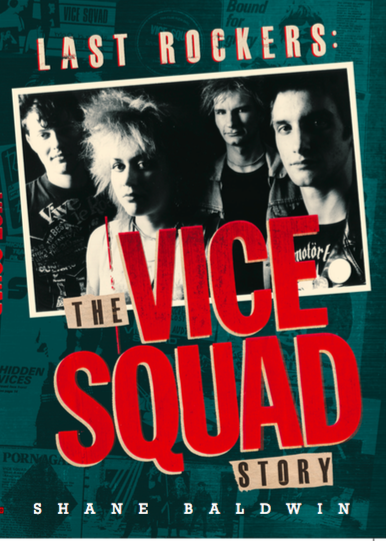 Drummer of UK 81 Punk heroes tells the story of his band from their roots in earlier outfit Spam/TV Brakes right through their prime years and beyond…..LTW’s Ian Canty cast his mind back to when mohicans roamed this green and pleasant land…..

I can confirm I was majorly into that second (or third or fourth or whatever if you want to be picky about it) wave of Punk that emerged in the early 80s, even though it’s not very cool to admit it these days (well I’ve got this far not being too cool, so…..). Vice Squad seemed like major players back then, hitting the national charts and featuring regularly in the music press. Never really my favourite band, I tended to favour the No Future roster of Blitz, the Partisans, Red Alert and the Violators, but they were nonetheless a decent, punchy outfit with some good tunes. They did stand out from the crowd a bit by having the charismatic Beki Bondage on vocals, a clear contrast to the macho bluster of some of the male fronted aggregations of that era (Wattie from the Exploited for some reason springs to mind), she came across as an intelligent and down to earth sort of cove. I had cause to meet Beki briefly a few times some years back (she has her own version of Vice Squad still gigging) and it was no act either, I found her on both occasions charming company.

In this book Shane Baldwin, from his position behind the Squad’s drum kit, takes us through the history of the band. Beginning as a couple of teenagers turned onto Punk by “God Save The Queen” (though it seems they were a bit underwhelmed by it at first – honesty shines through this tome as facts aren’t altered to make the author and his cohorts appear more trendy or clever than they actually are, which is a relief compared to some more high profile, self-serving Punk biogs), him and his mate Dave Bateman go from producing a fanzine to eventually launching their own band called “Spam”. Their part of the story will be familiar to anyone who attempted to start their own Punk band around the time hundreds of miles away from the posh boutiques on the Kings Road and with no discernible musical talent. Yes it’s the story of trying to work out what a chord actually is (not something that goes round your neck and stops your guitar falling to the floor), badly organised gigs, rubbish equipment, random violence, complaining neighbours etc etc.

The very fact that the setting and time of this part of the tale is on the outskirts of one of the “lesser” UK music cities from late 77 to 79 is important – it could be argued that without the belated impact Punk had going into the provinces of the UK it would have merely been just a more controversial spin-off from Glam Rock. The experience detailed by Baldwin was one largely shared by way more people outside of the capital and the tight timeframe of 1976 than the initial in-crowd, this version of “Punk” mattered too and cannot be discounted just because received wisdom has it that it all “finished after the Grundy fall-out”.

The friends’ fortunes change when they split Spam after a nasty incident when some pillars of the community decided to beat up three young kids who made up part of the band including the author (her majesty must have been so proud of these royalists). So they decide start afresh, this time advertising for a female lead singer and after a few false starts, enter the 16 year old Rebecca Bond. Things start to move a little quicker for the newly christened Vice Squad as after a prestige hometown gig with the Ruts and the Damned topping the bill (where the headliners let themselves down in spectacular style) they are seen by Simon Edwards, who had started Heartbeat Records in the city and was looking for bands to contribute to a local compilation LP in the mode of the recent “Vaultage 78”. So in addition to the Vice Squad stuff, we get to know a little about the Bristol Punk scene of the time, which is valuable because away from the metropolis it was definitely one of the more interesting locations and provided us with the excellent “Avon Calling” album which of course included the first recorded work of the band. Edwards, who along with Vice Squad themselves was the brains behind the later Riot City imprint, provides some vital input on this and also his days as the Squad’s driver/organiser. We also get to see a little of the fractured Post Punk scene of Bristol, which seemed to be drawn along Comprehensive/Grammar school lines.

Finding gigs became a problem (their live appearances or lack of them seem to be the bane of Vice Squad all the way through their existence) when the Local Constabulary seems to react to the punch ups at their irregular appearances by branding them the West Country Pistols and shutting down any attempts at live performance. Slowing the band’s progress more than a bit, things don’t really seem to kick on for them until the “Last Rockers” single becomes a big success. On the way they gain vital support from John Peel and a bit later on Garry Bushell of “Sounds” becomes besotted with them, or as he might put it, pre-occupied with pneumatic Punk Princess and her pugnacious pals. Less positive press is also forthcoming, but seems to have been taken in good part and with a stout realism on the whole by the author at least (a certain Paul Morley doesn’t exactly cover himself in glory with a hatchet job concocted when the band invite him magnanimously to the pub after the “official” interview was over- I wonder whatever happened to him?).

In a way it is a typical story of rock n roll mishaps – the recording of the duff “No Cause For Concern” album being a case in point, where the Squad are persuaded by their manager (the boss of a PA hire company) to use a cheapo studio to record to save money, but this appears to have been just an ulterior motive to furnish himself with the cash for a van to lug his equipment all over the country. That LP became an albatross around their necks for the remainder of the band’s lifespan and still obviously rankles. Signing to EMI, the biggest record label in the country at the time, presents them with an idealistic problem given their Punk stance and the relationship is fraught with difficulty. Otherwise the young innocents (well relatively speaking) are introduced to sex, drugs, rock n roll and more alcohol than you could shake a stick at. After a heady tour of America, which on the face of it would have seemed to set them up for further success, Beki decided to leave the band.

Undeterred by this setback (they were also dropped by EMI whilst Beki was retained and although not explicitly stated record company pressure may well have played a part in the split) they recruited a new singer in Julia “Lia” Rumbelow and recorded a few further singles and LP, the really good “Shot Away”, before things petered out.

Into the bargain we also get the full run down on the Chaotic Dischord saga, a joke that rapidly ran out of control due to its own success. Beginning as a spoof of the kind of cider-swilling bands like Disorder and Chaos UK (who were signed to the Riot City label against the wishes of most of the Squad), the sales of the records meant that the merriment stretched over seven LPs, one recorded by an off-shoot comprising Beki (and roadie Igor) who had left Vice Squad at that point of time and were peeved from being left out of the original project.

Shane Baldwin has honed his writing skills over the years, contributing to Record Collector and Vive Le Rock among other periodicals. He infuses this book with and easy going, self-deprecating charm, which would appeal to most readers, even those not numbering themselves as Vice Squad fans or being that familiar with the band. He also allows other members of Vice Squad and their entourage to chip in on the stories told, even when it shows the author in not a particularly good light. He can certainly spin a good yarn and on the whole “Last Rockers” is a nicely rounded version of events, an excellent read which only the most sniffy detractors would not enjoy.