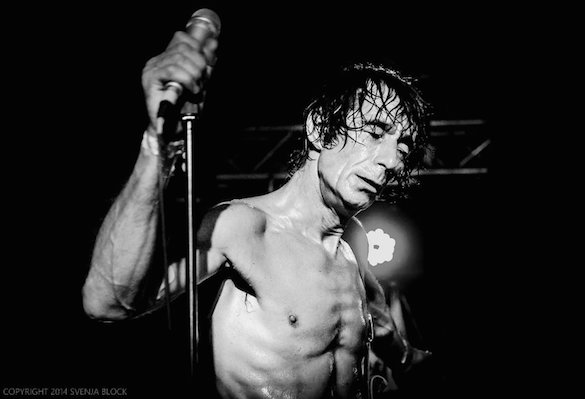 Sham 69 and Chelsea were co-headlining the Vive Le Rock stage at Guilfest 2014 on Friday. Louder Than War had writer David Bignell and photographer Svenja Block there.

It all began by Gene October placing an advert in Melody Maker back in 1976. At that time he recruited William Broad (who later on was to become Billy Idol) Tony James and John Towe. Chelsea were born. After several personnel changes and many albums Gene October is still the man with the attitude who proudly stands up front on stage. The present line up is a powerful one which also features once again Mat Sargent who was a band member in 90s before leaving to join Sham 69 and was also a well known face with Splodgenessabounds.  A current of energy surged from the stage on Friday night at Guilfest. Chelsea attracted an appreciative crowd. On lookers joined in from below and shouted back lyrics from songs they had been chanting to since late 70s and early 80s. Younger members of the audience seemed to embrace Chelsea and were able to join in one way or another. The atmosphere was soaked up by everybody in the Vive Le Rock tent on Friday night while Chelsea belted out a barrage of early delights which included The Loner, No Flowers and War Across The Nation. 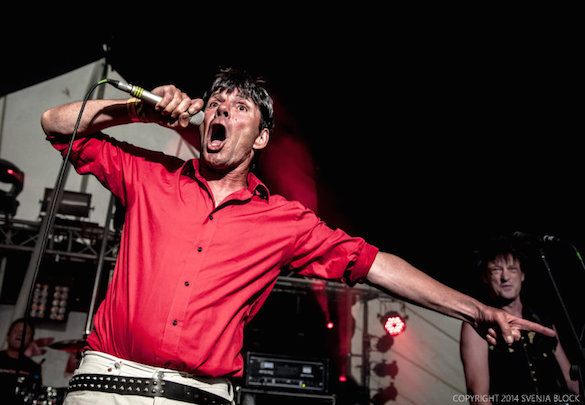 The encore let people know that things were drawing to an end in the nicest possible way with Last Drink and Evacuate. However, Chelsea were reluctant to leave the stage without playing their first single Right To Work which is as relevant today as it was back in 1977. You can see Chelsea play together with the Dickies at the Garage 23 August 2014 in London in August or at the Undercover Festival in Bisley, Surrey in September. 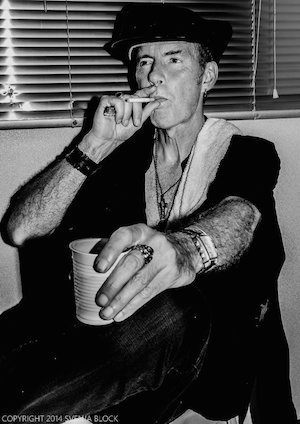 Sham 69’s Jimmy Pursey didn’t need to open his mouth as his presence was enough to excite the crowd when he walked on stage. The Hersham Boys were back in Surrey where it all began back in 1976, this time to headline on Friday night on the Vive Le Rock stage. Pursey’s stance alone wins a reaction from the crowd who packed into an area which was far too small for this band. It later emerged that The Boomtown Rats were playing the main stage at the same time with many festival goers deciding to give Bob Geldof’s lot a miss to join Sham 69 headlining at the Vive Le Rock stage instead.

Original members Jimmy Pursey, Dave Treganna and Dave Parsons (see photo, right, © Svenja Block) were joined once again by drumming ace Robin Guy. Other fans and onlookers soaked up the atmosphere from outside the very hot and sticky tent. Sham 69 ploughed through an exciting set which included a lot of songs from early albums which were all winners tonight judging by the applause and audience participation. Having notched up seven top fifty singles and three top thirty albums, people had no problem in joining in with one of the most successful punk bands. Stockwell, a reminder of the shooting of a young innocent girl, was one of Sham’s later recordings and doesn’t follow the same path as a lot of their sing along anthems. This song has a dark side to it and reflects on the sad world we live in today. The reminder of the incident was also sewn on to Pursey’s shirt, it was certainly close to Jimmy’s heart tonight. There was only room for one cover version but nobody objected to White Riot by The Clash which went down an absolute storm.

Nobody was going to go home tonight that was for sure until they got exactly what they wanted so of course the encore had to include hits Hersham Boys and Hurry Up Harry. Even passers by would have been able to stop and sing along with Sham 69 on this hot summer’s night which was certainly a night to remember. Sham 69 have just released the album download for their new new CD The Evolution Of Punk, featuring studio and live recordings from their appearance at Rebellion Punk Festival 2013 in Blackpool. The band have also announced 5 live dates across the UK in November.

Words by David Bignell. This is David’s first piece of writing for Louder Than War